Using the power of radio to end conflict in South Sudan

The second season of “Sawa Shabab“, a radio drama aimed at helping youth in South Sudan resolve conflicts peacefully, begins this week. In it, “Richard” tries to help his father navigate a neighborhood feud, while “Rose” faces the possibility of an arranged marriage with an older man.

“She will be challenged with a new lifestyle since her father wants to marry her off to an old man who already has wives,” said Alice Jino, who plays Rose on the radio show. “We all have our dreams, but our environment can have an influence on what choices we make.”

The radio program’s next 20-episode season is airing while South Sudan — independent for nearly four years — is still struggling under leaders who are of different ethnicities and are locked in a political dispute that frequently turns violent. Thousands have died since civil war broke out in December 2013, and more than one million people are displaced.

But even in areas of conflict, people listen to the radio.

“Sawa Shabab“, which means “Youth Together”, tries to spread its message on local radio stations across South Sudan. Free Voice South Sudan, the local producer, records the 15-minute episodes in English and Arabic, along with some in the Nuer and Dinka languages — the two main groups at odds in the country’s unrest.

“My message to the people of South Sudan is that peace is all we want and in order for it to happen, people should strive to be the peacemakers,” said Jino. “Our tribe should be a strength not a weakness to divide us.”

Because of the ongoing fighting, Dolan said he toned down one of the original curriculum goals of national identity and dialed up the difficulties youth face in living with conflict and the deep societal divisions. The new curriculum goal also emphasizes reconciliation, a necessary factor for the nation to heal.

“These goals are modeled by the characters in the show,” he said. “For example, characters involved in a family dispute are considering forgiveness as a way to move toward reconciliation.” 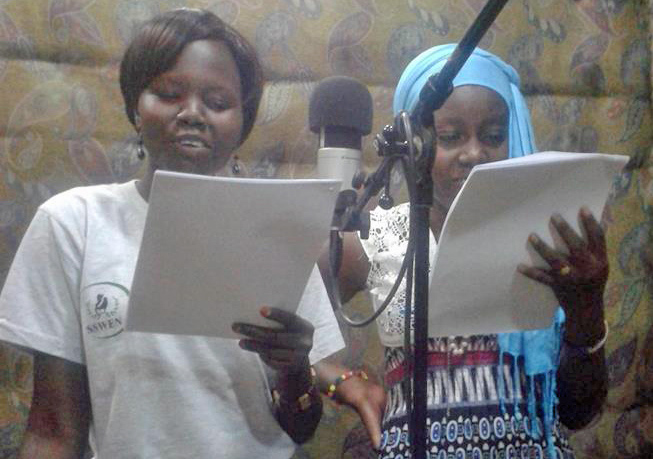 Some of the actors record their part of the South Sudan radio drama. Photo courtesy of “Sawa Shabab”

For Season 2, producers also tried to make the stories more relatable to people in rural areas, such as the Greater Upper Nile region in the northeast, where youth have less access to information and “are particularly at risk of being drawn into violence, either as victims or aggressors,” Dolan explained. In one new plotline, a dispute is resolved at the community level through a meeting of elders.

An independent survey firm found a general improvement in people’s perceptions of each other after Season 1 aired. But in order to demonstrate more concretely what people can do to defuse tensions where they live, the producers of “Sawa Shabab” launched a pilot program this year that involves the radio program’s most ardent listeners.

Fans of the show were trained in leadership, conflict analysis and social media. These “youth mobilizers” then went into their communities and teamed up with youth groups to hold peacebuilding activities, such as community theater productions, concerts and sporting events.

Anyone can weigh in on the show’s storylines through a feedback feature. Each show ends with a question that listeners can answer via phone or text message. After one episode in Season 1, the character Rose asked the audience what she should do about the arranged marriage.

A listener named Yohana in Juba sent in her answer: “If I were Rose, I will refuse to marry that man, because he was brought by my father and marriage is a decision of both sides (Rose first).”

Listeners will have to tune in to see what Rose will do.

You can listen to all of the “Sawa Shabab” episodes here.

Left: The trained "youth mobilizers" help set up peacebuilding activities in their own communities in South Sudan. Photo courtesy of "Sawa Shabab"