Queen Elizabeth II, the longest reigning monarch in British history, died Thursday at age 96, after she was placed under medical supervision for failing health.

The royal family announced her death, saying the queen “died peacefully” at Balmoral Castle in Scotland.

As head of state for the United Kingdom, Canada, Australia and New Zealand, her 70-year reign spanned more than a dozen U.S. presidents and nine popes. Her life stretched from Model T cars to self-driving cars.

Only three other monarchs have reigned for more than seven decades. She joins the history-making reigns of France’s Louis XIV, Johann II of Liechtenstein, and Bhumibol Adulyadej of Thailand. Her son, Prince Charles, is next in line for the British throne. 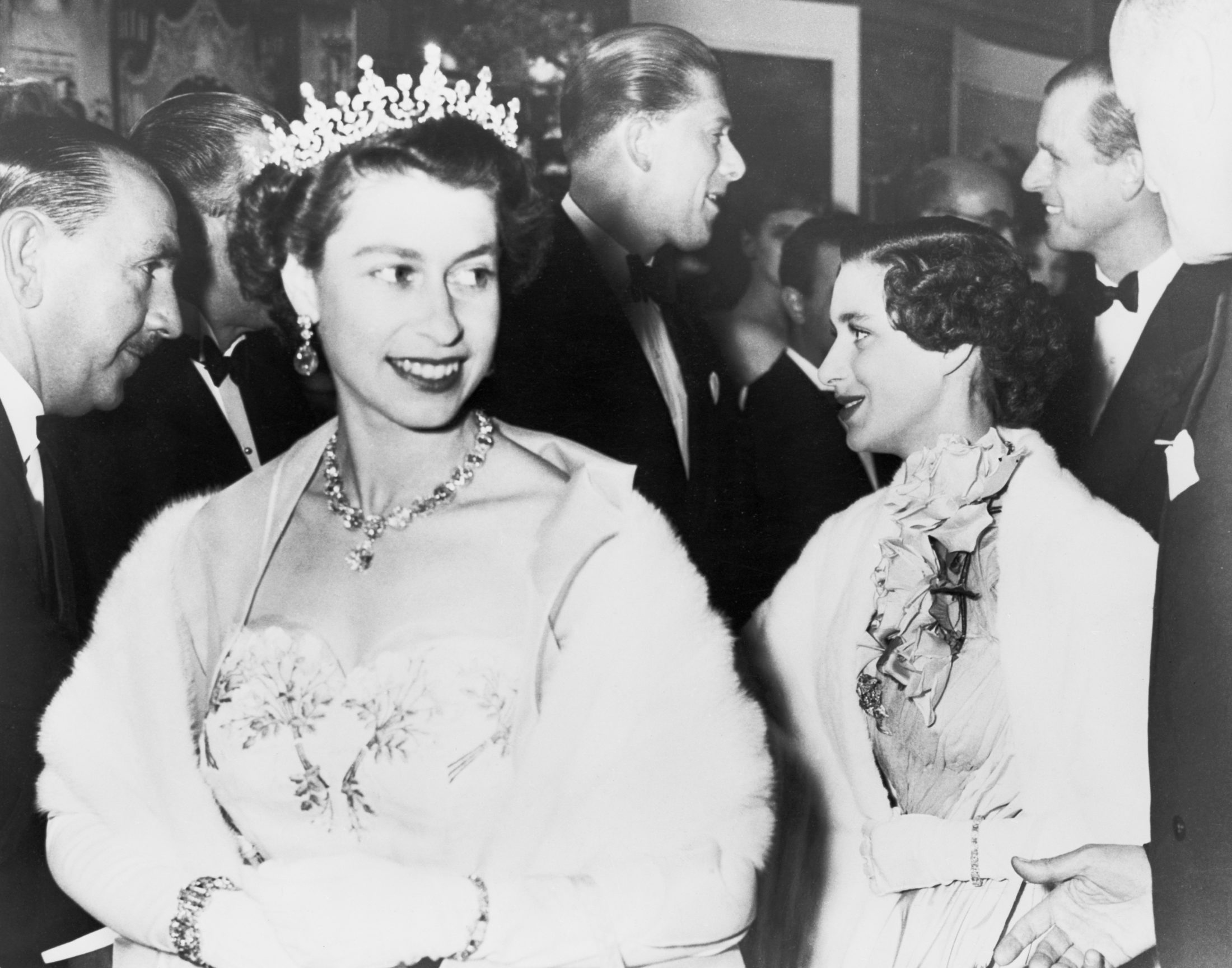 Queen Elizabeth II with Princess Margaret and the Duke of Edinburgh at Tivoli Theater in London, 1954. Photo via Getty Images

Elizabeth was the monarch of more than a dozen independent countries that used to be under British rule. Recently, Barbados became the latest country to sever ties with the crown. First settled by the English in 1625, the island nation formally ended nearly 400 years of British rule in 2021 by removing Elizabeth as its ceremonial head of state and becoming a republic.

Concerns over the queen’s health have grown in recent years. Earlier this summer, the monarch quietly celebrated the 70th anniversary of her accession to the throne by pulling back on public appearances during the four days of festivities. 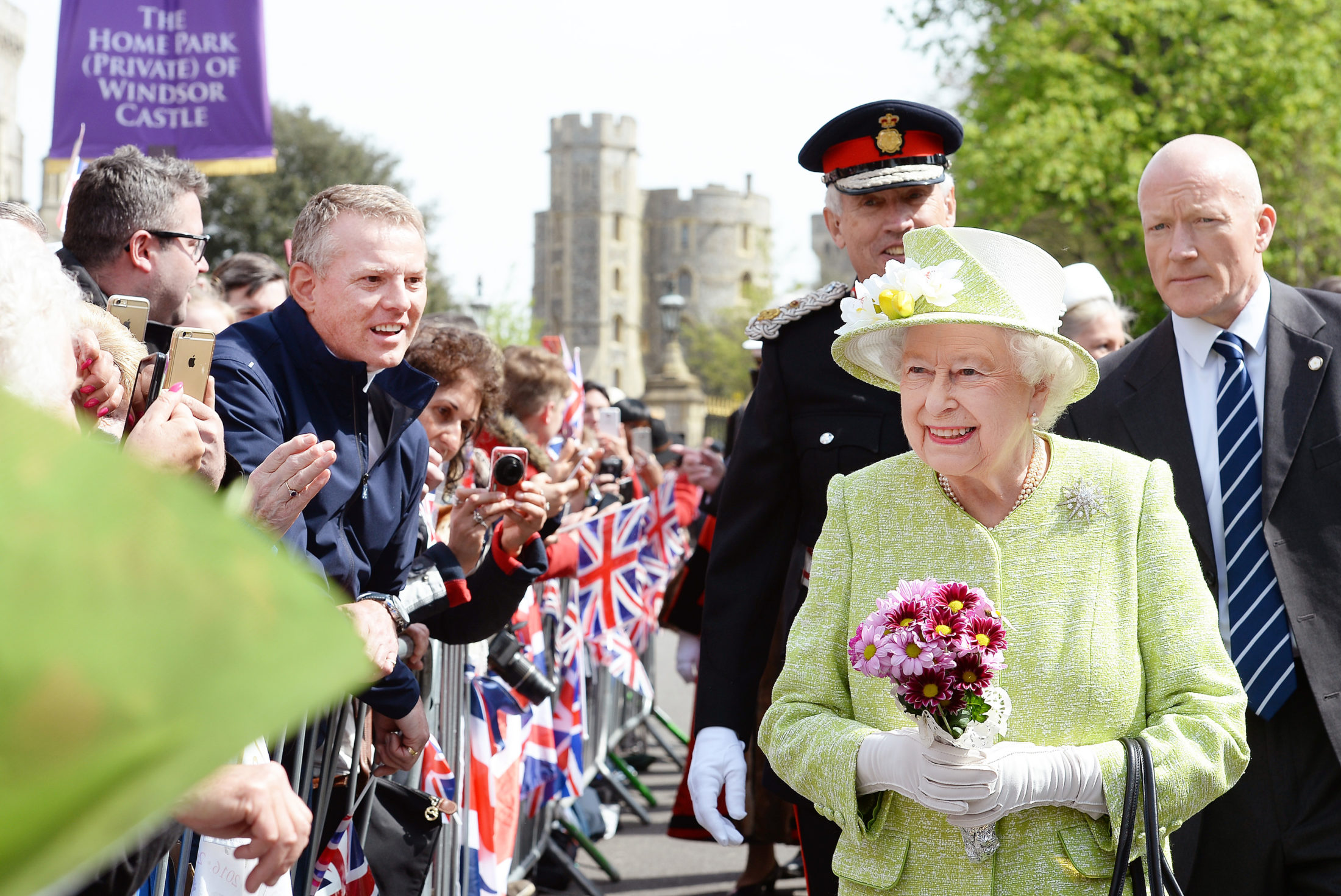 Britain’s Queen Elizabeth walks through Windsor, England, on her 90th birthday on April 21, 2016. Photo by John Stillwell/Pool via Reuters

As Britain celebrated the 96-year-old monarch’s Platinum Jubilee with pomp and pageantry, she commemorated the milestone with a much smaller group of people at Sandringham, her country estate, and without Prince Philip, her husband of 73 years, who died in 2021.

In an official photo commemorating her Accession Day, a picture of her father is seen nearby. It was a meaningful visual cue: Elizabeth became Britain’s sovereign after the death of George VI at the estate in 1952.

As queen, Elizabeth broke new ground, visiting Ireland in 2011 as a gesture of reconciliation and goodwill, marking the first time a British monarch had visited Ireland since 1921. She saw more than 40 former British colonies gain their independence — and Britain’s break from the European Union.

And then there was that day she took Saudi Arabia’s King Abdullah for a spin in her Land Rover.

Elizabeth Alexandra Mary was born in London on April 21, 1926 — the eldest of two daughters — to parents who would later become King George VI and Queen Elizabeth. 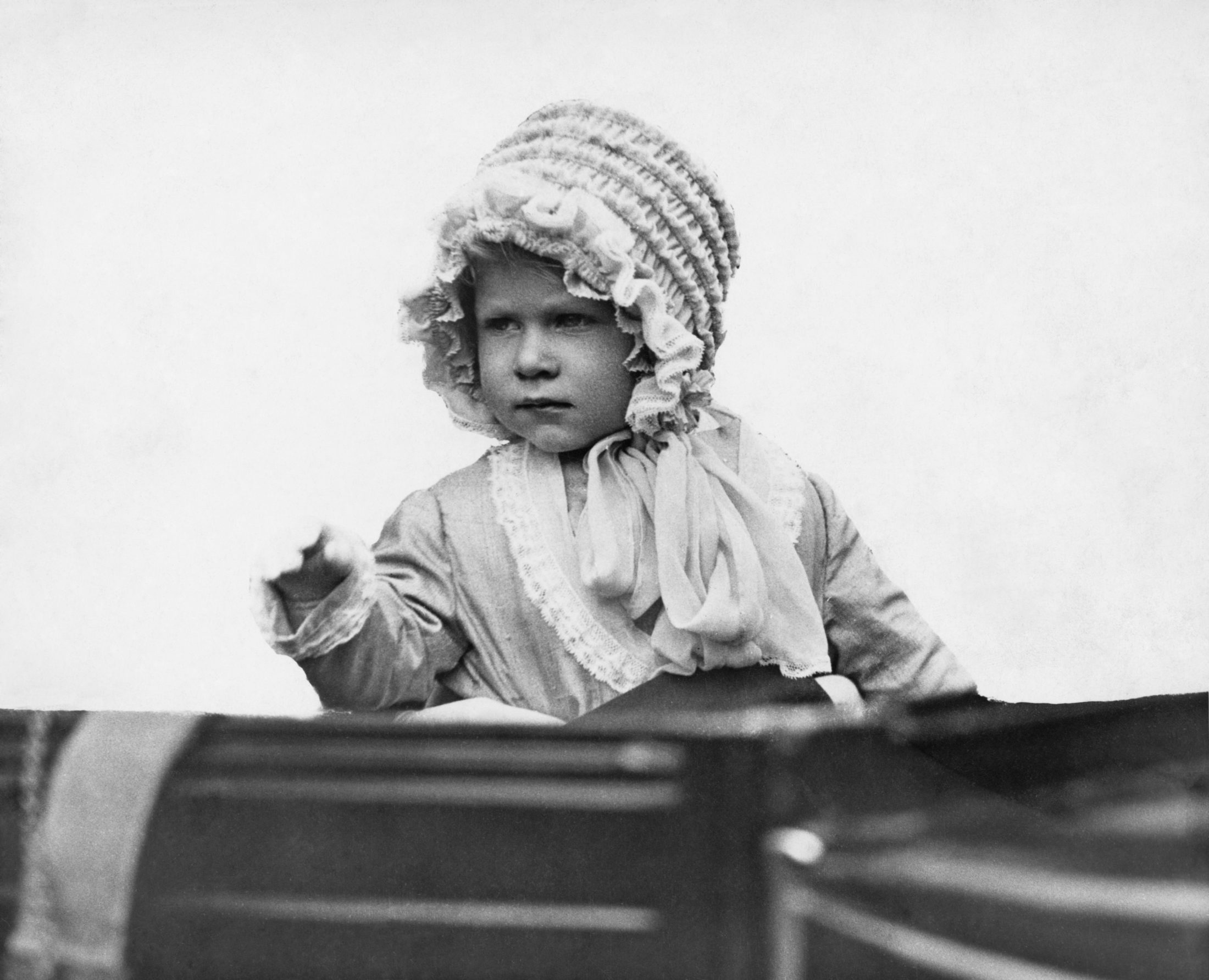 After Britain entered World War II, Elizabeth and her sister, Princess Margaret, were moved from castle to castle within the kingdom to escape the aerial bombing.

With her sister by her side, Elizabeth — then just 14 — read a statement on the radio to cheer up the children who had to evacuate the country because of the war. “When peace comes, remember it will be for us, the children of today, to make the world of tomorrow a better and happier place,” she said.

In 1945 at age 18, she joined the Auxiliary Territorial Service, a women’s branch of the British army, as a driver and mechanic. She celebrated on the streets of London with thousands of other revelers when the war in Europe came to an end.

In 1947, she married her lifelong love, Prince Philip, duke of Edinburgh, a man she described at their 60th anniversary as “my strength and stay all these years.” They parented four children: Charles, Anne, Andrew and Edward. 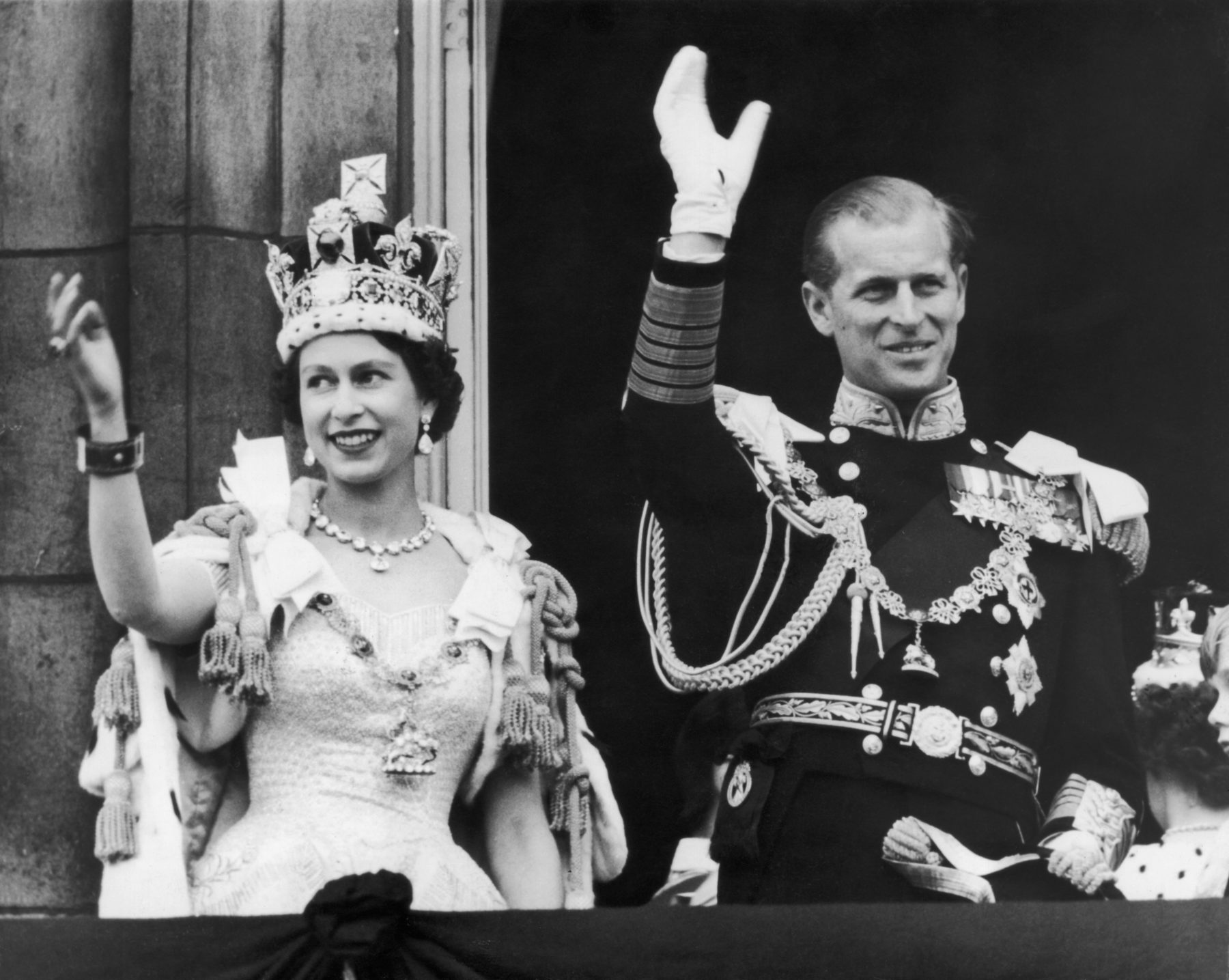 Queen Elizabeth II and the Duke of Edinburgh wave to the crowds from the Buckingham Palace balcony on her coronation day. Photo by Keystone/Getty Images

It wasn’t long before Elizabeth became queen, at age 25, following the death of her father King George VI in 1952. She stood in for him during his years of declining health.

As queen, Elizabeth toured the world with her husband, visiting all of the countries under her reign.

In the 1970s and 1980s, colonization was coming to an end and more than 20 countries gained independence from Britain. In 1973, Britain joined the precursor to the European Union, called the European Economic Community. Forty-three years later, the UK voted to leave the EU.

Watch a report of Queen Elizabeth and Prince Philip’s tour of the United Kingdom in 1977.

The British monarchy has long faced criticism for its historical colonialism and its ingrained racism. The queen’s distant predecessor, Elizabeth I, had a principal role in establishing the British slave trade.

The queen was also responsible for a litany of ceremonial duties, like bestowing honors to a variety of citizens. She also has been the patron of hundreds of organizations and charities. Days before her death, the queen anointed Liz Truss as Britain’s new prime minister.

The queen had a personal scare in 1981 when she was riding in a military parade in London and a man fired a gun at her. It was loaded with blanks, so she was unharmed. The next year, she awoke to see an intruder in her bedroom. The man spent the next six months in a psychiatric hospital. 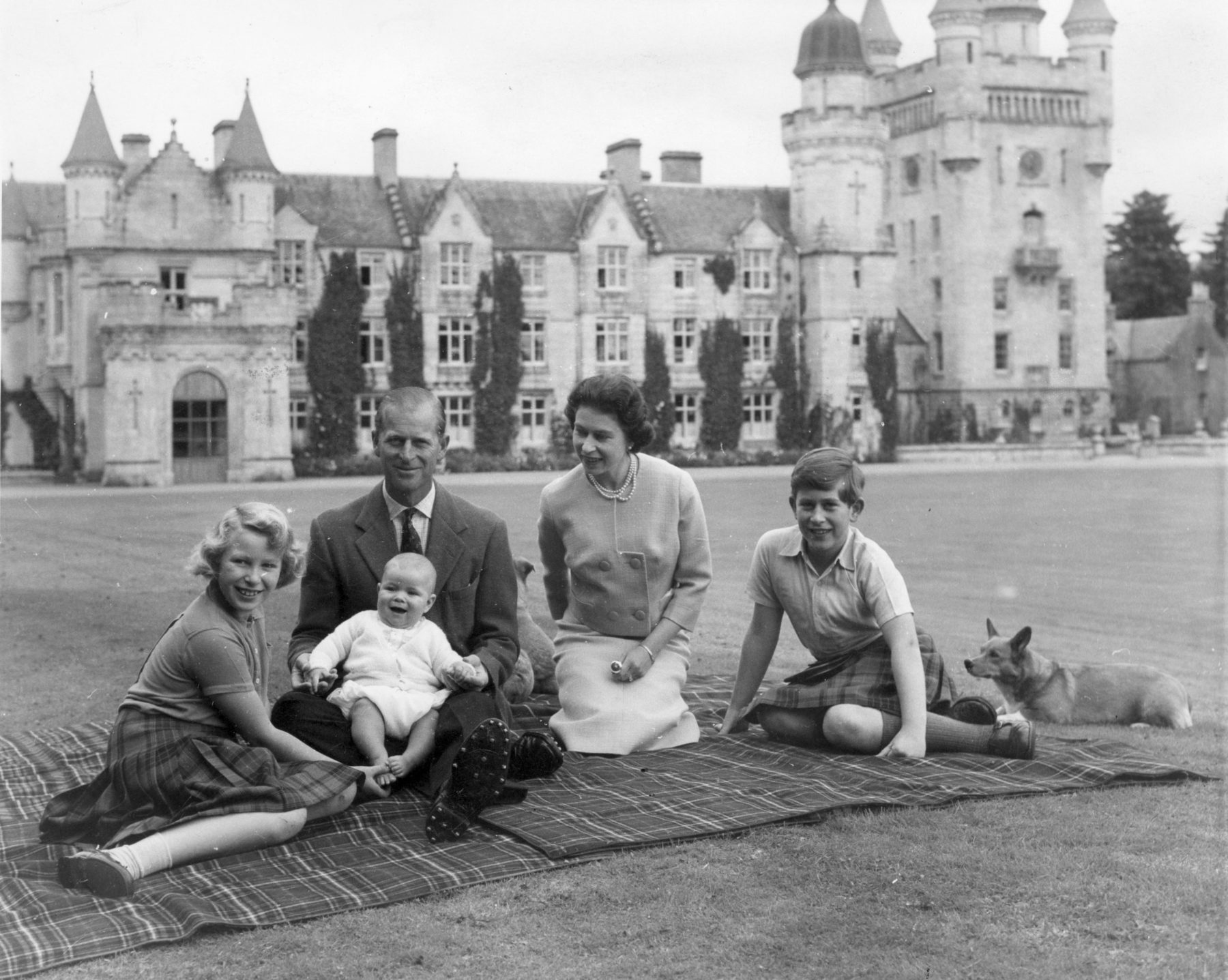 Queen Elizabeth II and Prince Philip, Duke of Edinburgh, with their children, Prince Andrew, Princess Anne and Charles, Prince of Wales, sitting on a picnic rug outside Balmoral Castle in Scotland in 1960. Photo by Keystone/Getty Images

The royal family endured other shakeups. In the 1990s, her sons Charles and Andrew and her daughter Anne announced their divorces.

Tragedy struck on Aug. 31, 1997, when Princess Diana, the former wife of Prince Charles, died in a car crash in Paris as she was pursued by paparazzi. After Diana’s death, the queen received some rare criticism for staying in Scotland with her grandsons William and Harry instead of quickly returning to London to be with a grieving nation.

Elizabeth experienced more loss in 2002 when her mother, the Queen Mother, passed away in her sleep at age 101. Her sister Margaret died the same year after suffering a stroke.

At the time, Elizabeth described the strength she drew from her family. “Our children, and all my family, have given me such love and unstinting help over the years, and especially in recent months,” she said, according to the royal family’s official website.

Her passion for horses and love of Corgi dogs also never diminished with time. 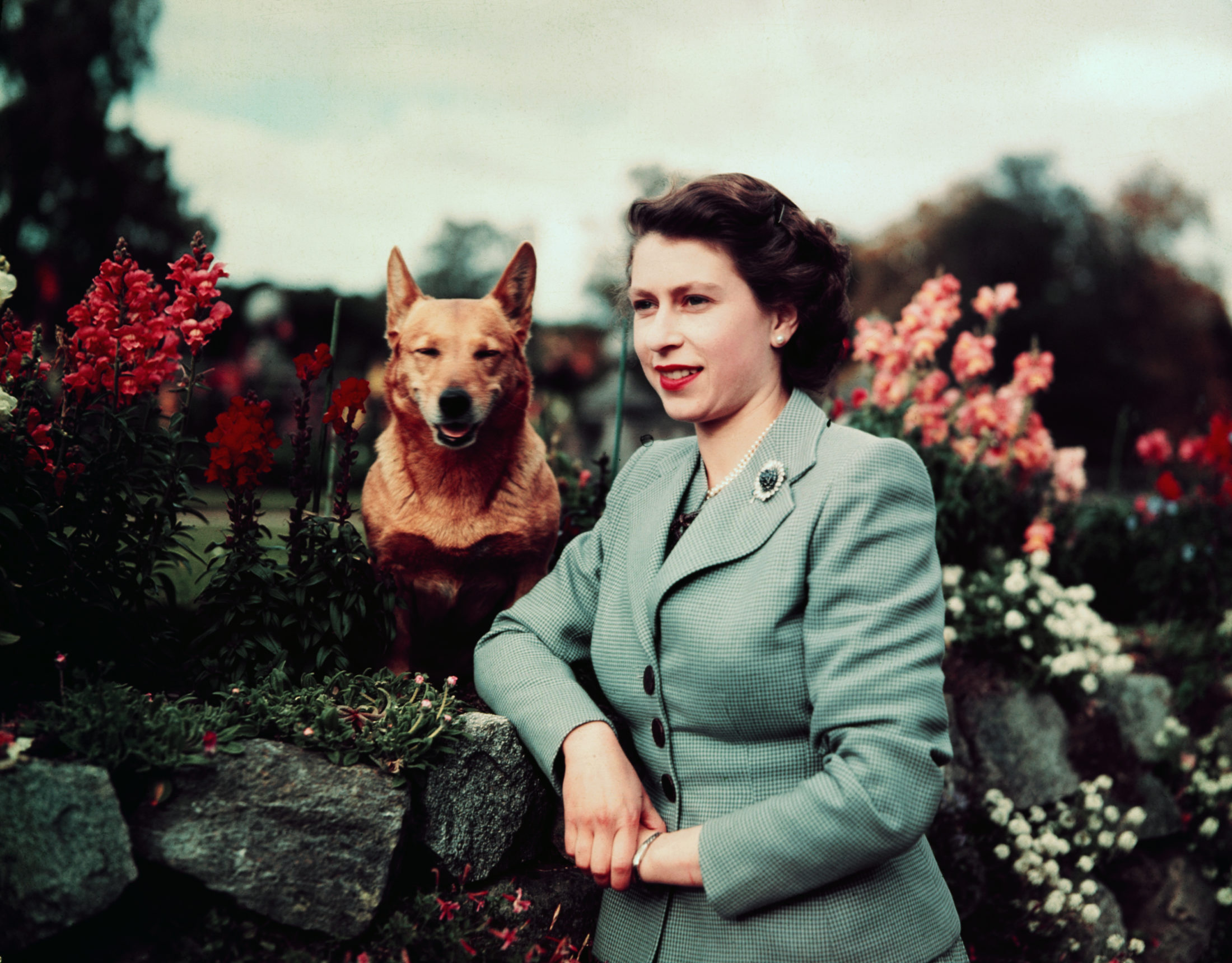 Throughout her life, she remained a stalwart defender of the monarchy’s image while allowing it to evolve with the times. When her great-grandson Prince George was born in July 2013, the announcement came via the traditional easel display in front of Buckingham Palace but also via the modern medium of Twitter.

The queen, however, faced turmoil within her family when Prince Harry and his wife, Meghan, the Duchess of Sussex, stepped away from royal duties in 2020. The pair moved to California with their two children and have publicly spoken about their strained relationship with the royal family. 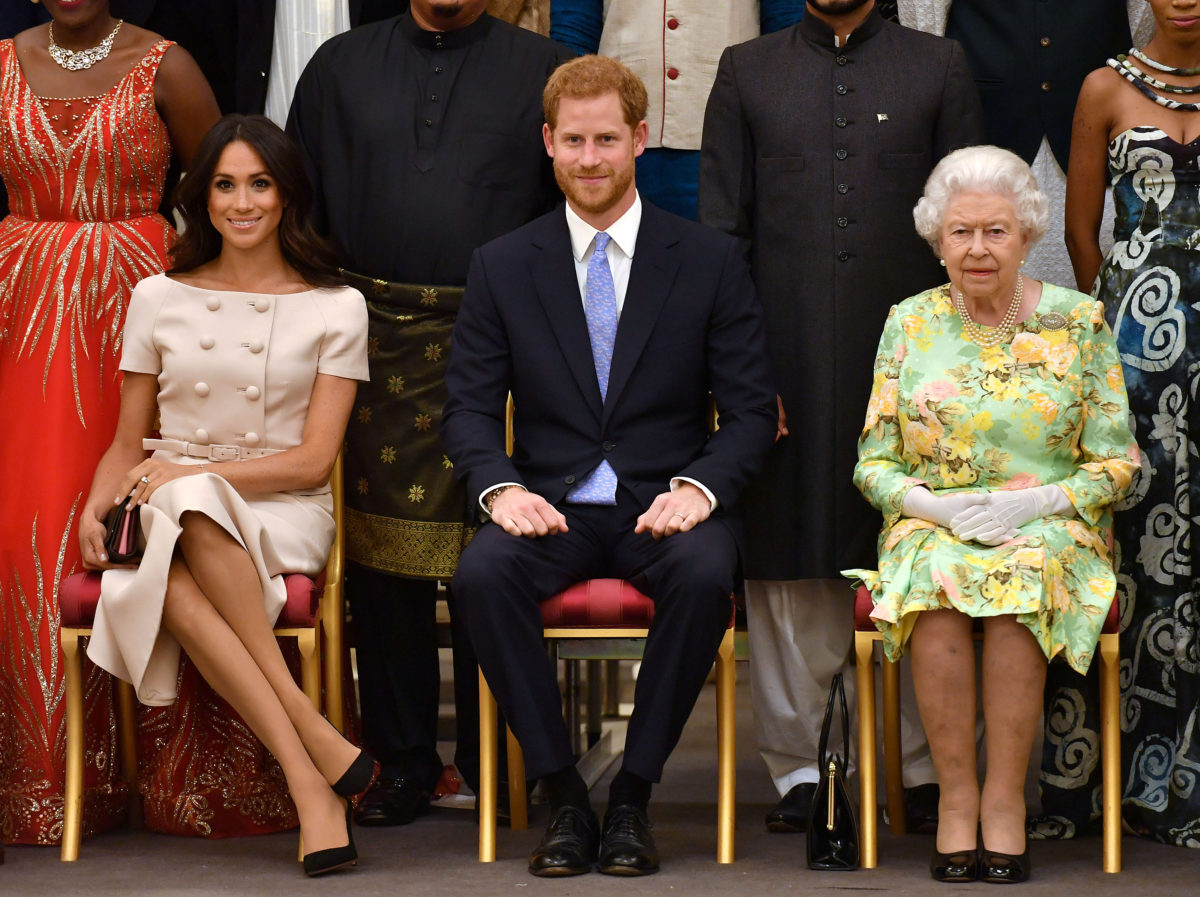 Britain’s Queen Elizabeth, Prince Harry and Meghan, the Duchess of Sussex, pose for a picture at in London in June 26, 2018. Photo by John Stillwell via Reuters

In an interview with Oprah Winfrey, Meghan, who is biracial, talked about how she endured discussions about the color of her son’s skin, and constant tabloid attacks.

When the coronavirus outbreak forced Britain to a halt in 2020, Elizabeth delivered a rare televised message to the nation.

In the face of lockdowns and self-isolation to stop the spread of the virus, the beloved royal, known affectionately as “Lilibet,” reminded Britons that they possess the strength of their forebears, alongside a direct reference to Vera Lynn, whose songs were their own symbols of hope during World War II.

Left: Queen Elizabeth II, the longest-serving British monarch in history, has died at the age of 96. Elizabeth was 25 years old when she assumed the throne in 1952 following the death of her father, King George VI. The PBS NewsHour takes a look back at the queen's life and her historic role.