A new radio drama in South Sudan called “Sawa Shabab” coaches young listeners on life skills and getting along with others. But just as production was set to begin, violence erupted in the country — the same violence the show’s creators were hoping to prevent.

In mid-December, fighting broke out between different ethnic groups, fueled by a divided political leadership. South Sudan’s President Salva Kiir belongs to the Dinka ethnic group, and Riek Machar, a former vice president-turned-political opponent is a Nuer. Their rivalry manifested in violent confrontations between armed groups in the country’s capital Juba, Jonglei and elsewhere. At least 1,000 people were killed and hundreds of thousands displaced.

“One of the key drivers of conflict in South Sudan has been — one could argue it still is — tribal affiliations that come at the price of splintering national unity,” said Theo Dolan, senior program officer of the U.S. Institute of Peace’s PeaceTech Initiative, which came up with the concept of “Sawa Shabab,” or “Together Youth.” The radio drama aims to address tribal differences by having actors overcome obstacles to work together for their country, to show young listeners that good can come from respecting diversity and countering stereotypes. 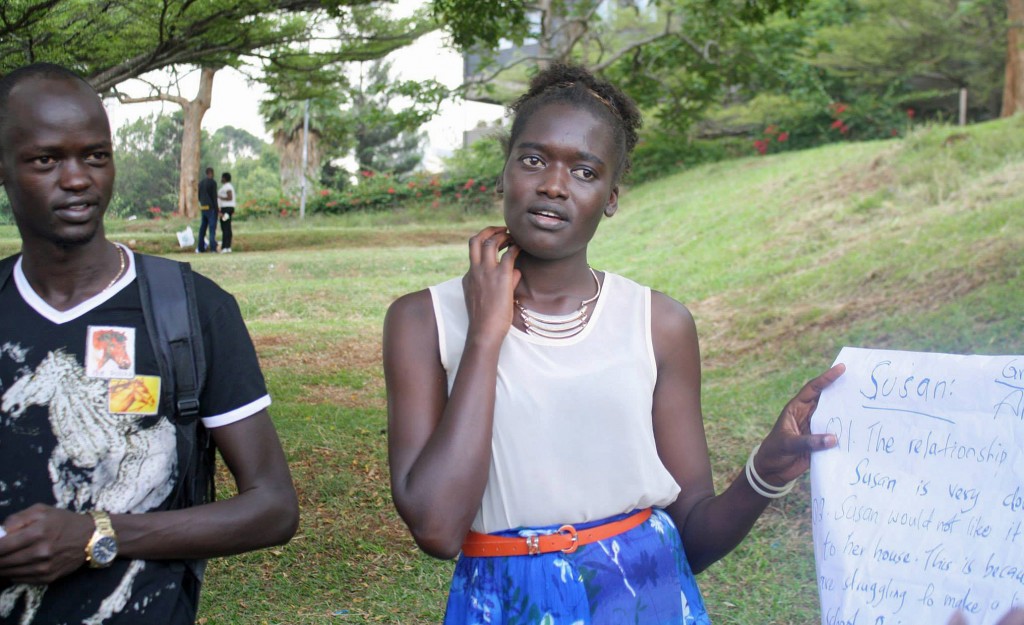 The Dinka and Nuer language cast members had a team-building day in Nairobi, Kenya, to get to know each other better. Photo courtesy of “Sawa Shabab”

Some of those who fled Juba during the violence earlier this year were the writers and producers of the radio program’s Dinka and Nuer language episodes, said Nicola Franco of Free Voice South Sudan, director of the “Sawa Shabab” production and a native of Juba. “Many people were afraid they’d get killed,” he said. For the safety of the staff and the Dinka and Nuer actors, they moved the production to Nairobi. The English and Arabic versions were still taped in Juba.

“We were just planning to do the 20 episodes in English and Arabic, and one in a local language. But when the violence started in mid-December, we expanded to include five episodes in Dinka and Nuer, because those were the main combatants and many of the combatants were youth,” explained Dolan.

The Dinka and Nuer episodes will be aired in the Upper Nile states, depending on where each language is spoken. The Arabic and English versions will be aired throughout the country. 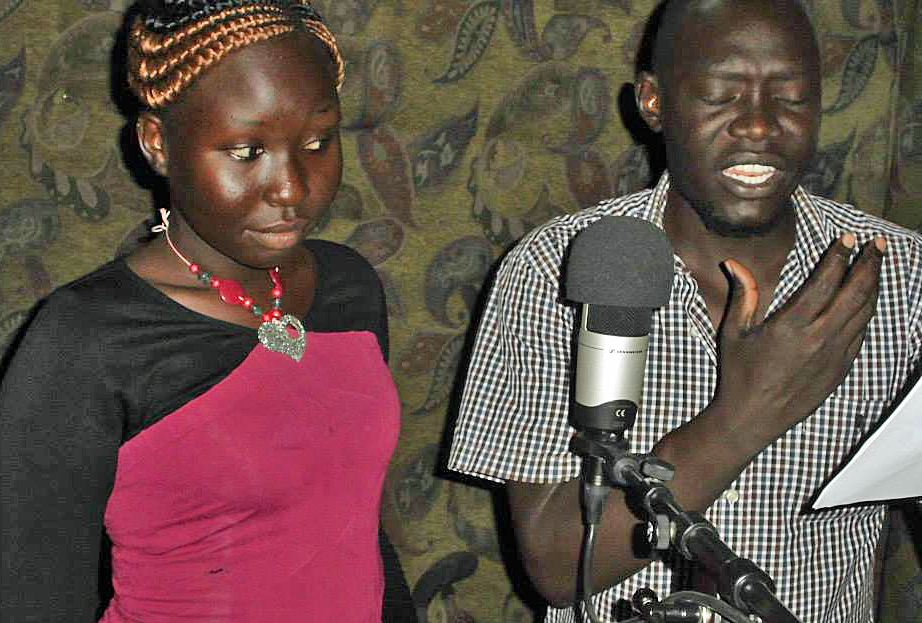 Actors record the scene of the character Winnie rebuffing Tony, who offers her a ride on his motorcycle, at the studio in Juba, South Sudan. Photo courtesy of “Sawa Shabab”

Juba resident Alice Jino plays one of the main characters, “Rose”, a high school student who dreams of becoming an actress. In the first episode, Rose tells her mother she must delay doing her chores because she’s going to church after school, when she actually wants to attend the school’s talent show to deliver a monologue that she’s toiled over for many nights. The topic: finding your own freedom.

“I really like the character Rose because [her character] tries to reflect that everybody has their own dreams, vision and goals that they want to achieve,” Jino said. “Rose bring up so many issues that a South Sudanese girl might face and how the girls might deal with them.”

Jino, 24, had never acted before, but when she learned about the goals of “Sawa Shabab,” including encouraging gender equity, she thought she’d give it a try. “I got nervous, but it was a good thing,” she said.

Other characters in the radio drama are learning to fit back in to their home country after living abroad, trying to find a job, and dealing with parents who have different life goals for them. At the end of the episodes, an announcer invites listeners to weigh in on each conundrum via a text message or the show’s Facebook page.

Most of South Sudan’s population listens to the radio — rather than watches television — and the invitation to text message about the show’s themes was a way to engage young people at the local level, Dolan said.

“In South Sudan, 72 percent of the population is under the age of 30,” said Dolan. Through the project’s research, Dolan learned “the youth are at times somewhat fatalistic, but also they want to be empowered, they want to do something for their country and for themselves,” he said.

“Sawa Shabab” expresses not only what youth might be thinking, but how they can think about things differently, added local producer Franco. 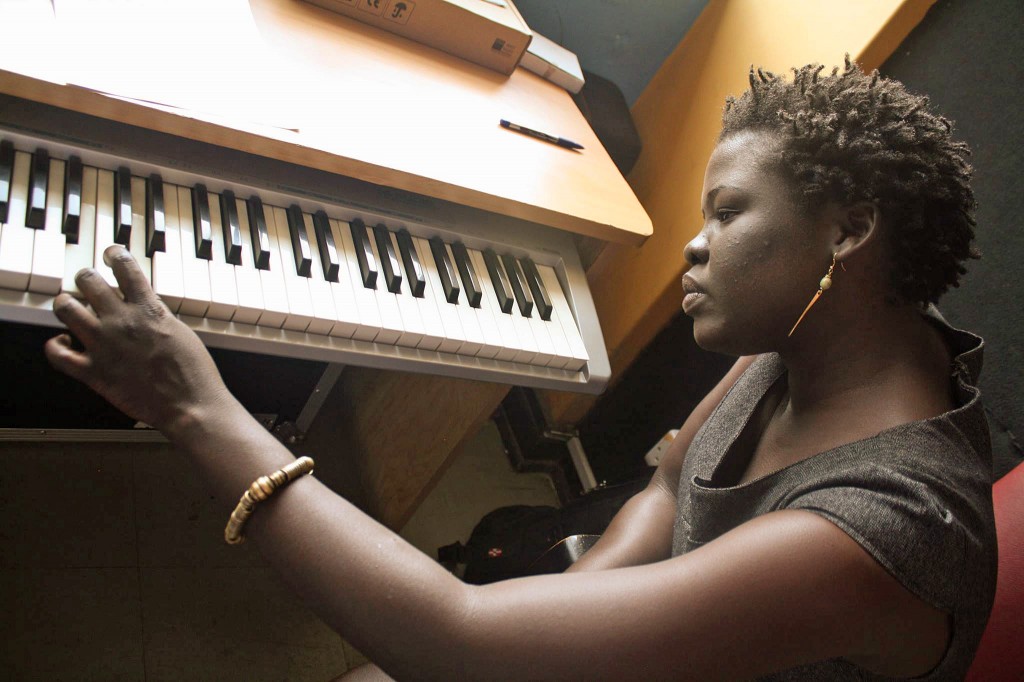 The conflict in South Sudan has settled down somewhat since Kiir and Machar signed a ceasefire deal on May 9, but sporadic fighting has continued and the dread of renewed violence is ever-present. A past attempt at reconciliation at the leadership level disintegrated in January, and now the United Nations is warning that 4 million people face starvation because the fighting disrupted the growing season.

For Jino, the nearly five months’ of violence profoundly affected how she views her homeland. “That experience was beyond what I thought I would ever go through. It actually changed my imagination and my picture of how I see South Sudan,” she said.

During the rampages, Jino and others felt they weren’t safe in Juba, so they moved temporarily to the countryside in case they had to depart the country quickly. “It was very insecure. Even now, I don’t feel secure,” she said.

“It made me to some extent lose hope in South Sudan and wonder what can I be able to do.” Jino said she thinks “Sawa Shabab” might in some small way help with reconciliation and bring back hope.

You can listen to all of the “Sawa Shabab” episodes here.

Left: Sawa Shabab producer Alsanosi Osman and actors playing "Winnie" and "Hakim" record episode 3 in Nairobi, Kenya. The Dinka and Nuer language actors had to go to Nairobi because of the violence in South Sudan. Photo courtesy of "Sawa Shabab"