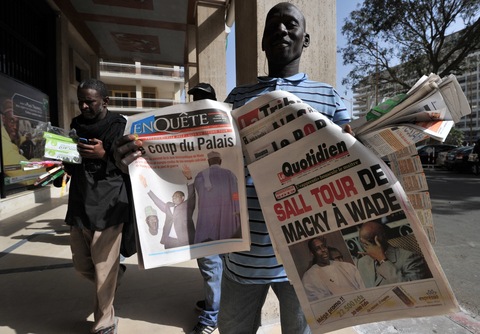 Senegal, a West African nation reputed as being one of the continent’s most stable democracies, held presidential elections Sunday despite earlier violent protests by those angry the incumbent is seeking a third term.

The elections proceeded smoothly in general, and vote tallying is underway. “As long as voters have no reason to think they are being cheated, there is no immediate reason for violence,” said the International Crisis Group’s West Africa project director Gilles Yabi Olakounle, who is based in Senegal’s capital Dakar.

President Abdoulaye Wade, 85, was first was elected in 2000. During his seven-year term, the Senegalese Constitution was changed to limit a president to two five-year terms. Wade then ran again after the end of his first term and won re-election.

In 2007, he stated that he would not and could not under the constitution run a third time. But he later reasoned that his 2007 win was actually his first term under the current constitution, freeing him to run again in 2012. In January, Senegal’s constitutional court agreed with him.

Nearly everyday since, thousands rallied in protest, saying he broke his promise to stick to two terms. “His lies and broken promises have left us with no choice but to fight in the streets for his exit,” said one protester, reported the Guardian.

Others do not think that a president who is “good” for the country should go, said Yabi. Wade’s supporters also say he helped infrastructure development and social services during his 12 years in office.

Also working in his favor is that the opposition did not rally behind a single candidate — about a dozen people ran against Wade. (The BBC has a round-up of some of his challengers, including former Prime Minister Macky Sall, who many believe will enter a runoff with Wade.)

Official provisional results are expected Friday. If no candidate secures 50 percent of the vote, a runoff would take place March 25.