Sex traffickers target poor communities in India. This group aims to stop them

“Economic freedom doesn’t actually mean that much if you’re in a highly abusive situation,” said Elca Grobler, who originally planned to use her background in finance and investment banking to train Indian women in financial literacy and development.

Instead Grobler started My Choices Foundation soon after moving with her family from Australia to India in 2011. The organization has since grown to 24 staff members with two main objectives: preventing sex trafficking and addressing domestic violence in India.

In the South Asian country of 1.3 billion people, there is an innate power imbalance between men and women, said Grobler. Women grow up as a commodity of the family, then they get married and become a commodity of their husband’s family, she said. “It’s something that’s inherent in a patriarchal culture. Women are not viewed as who they are but what they are.”

“Economic freedom doesn’t actually mean that much if you’re in a highly abusive situation.”

A ranking of women’s well-being per country — based on their inclusion, justice and security — by the Georgetown Institute for Women, Peace and Security and the Peace Research Institute of Oslo puts India at No. 131 among 152 countries.

Grobler said India lacks governmental resources and infrastructure to address domestic abuse, and women often feel too ashamed to seek help. When they finally do reach out, it is after years of abuse and they are at their wits’ end.

One night a woman called on the helpline, begging Kranthi Ahron, a My Choices Foundation team member, to take care of her children because she wanted to end her life. Ahron remembers the case from when she first started as a counselor with Operation PeaceMaker, the group’s initiative to end violence against women and girls at home.

The woman was married to an alcoholic, who was abusive and didn’t let her work as a fruit-seller for days at a time when he suspected her of being unfaithful. “She suffered emotionally — and economically,” Ahron said.

After speaking with her for an hour, Ahron told her to wait until the morning before doing anything drastic, so she could meet the woman’s children. The next day, she saw the woman, who told her, “I’m alive and I’m taking good care of my kids.”

Her turnaround surprised them both. “I gave some time to her, and helped her know someone cared,” Ahron said. 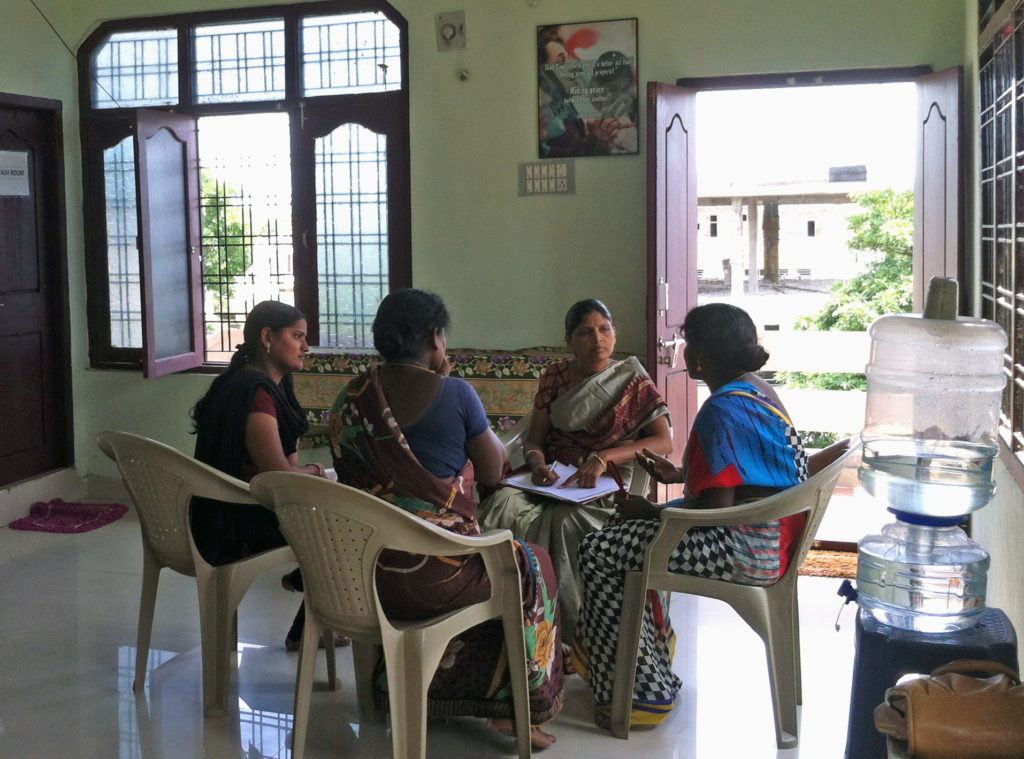 Operation PeaceMaker offers free counselling to survivors of abuse and their families, and provides legal advice if the survivors want to take any formal action. The counselors are local women trained to work within their own communities. They also run workshops to educate whole communities on how they can support each other in preventing abuse.

Ahron is now a state coordinator in southern India for Operation Red Alert, the organization’s other main initiative to prevent sex trafficking by teaching families how they can keep their daughters safe.

The Global Slavery Index for 2016 says more than 18 million people in India live in slavery, such as forced labor or marriage, although it does not specify how many women and girls are coerced into the sex trade in particular. Worldwide, the tally of modern-day slaves is about 40 million, according to the index, which means nearly half are in India.

Sex traffickers target poor communities, because they can lure girls into their service by offering to pay families’ debts, finding the girls jobs and making other promises. Australian analytics firm Quantium developed an algorithm to help the group identify at-risk communities based on factors such as poverty level, distance to police stations and transportation systems, education and literacy.

The behavioral researchers at Final Mile in Mumbai helped Grobler and her team devise the best way to approach fathers about trafficking, and it was to appeal to their sense of protectiveness in a positive way. Fathers often are the key decision-makers in families and sex traffickers approach them the most.

Once traffickers know someone is monitoring the village, it may dissuade them from trying anything.

Through the program, fathers learn that investing in their daughters’ future by educating them will benefit the family and the community more than an early marriage or sending them away to work. “We speak to the good in the fathers,” and empower them with what to look for to protect their daughters from traffickers, Grobler said.

The local implementing partners spend three days in each village, show films about trafficking, organize school programs, and meet with parents, children, village leaders and police. They continue to monitor the community after the formal program by keeping in contact with assigned residents. Once traffickers know someone is monitoring the village, it may dissuade them from trying anything, Ahron said.

She recalled one visit to a village, where someone told her, “A girl is missing; if only you had come earlier.”

It “pierced my heart,” she said, but it also spurred her to want to do more.