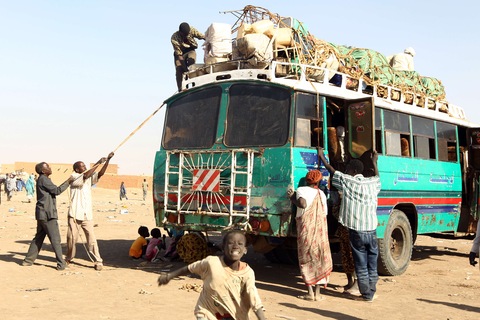 Residents of southern Sudan vote Sunday in a long-awaited referendum on whether to split from the north and form their own country. Analysts expect the oil-rich south will choose independence in the Jan. 9 referendum, which lasts a week, possibly triggering clashes between militias tied to both governments.

Jonathan Temin, senior program officer on Sudan at the U.S. Institute of Peace who travels regularly to the region, provides insight on the historic vote:

When will we know the results?

JONATHAN TEMIN: Vote counting is expected to take several weeks, so results will not be immediate. Current estimates are that results will be finalized in the first half of February. So some patience will be required as the counting process plays out — the authorities will be careful to stick to the provisions for vote counting and appeals in the legislation that govern the referendum.

Would the split occur immediately?

TEMIN: No, if there is a vote for secession it will occur at the conclusion of the Comprehensive Peace Agreement, which will be July 9, 2011, six months after the referendum. So patience will also be required in waiting for that date. The fact that there will be six months between the referendum and possible secession is not widely understood in many of the more remote parts of southern Sudan. But those six months will be important to the ongoing negotiations between northern and southern authorities on outstanding post-referendum issues, such as future revenue sharing, division of Sudan’s debt, and citizenship rights.

What changes would southern secession bring to people’s daily lives?

TEMIN: Significant changes may not be immediate. Many people in southern Sudan have high expectations that secession will quickly bring significant dividends, but this is not likely to happen. The Government of Southern Sudan remains nascent and in need of substantial capacity building; its ability to bring much-needed services to its constituents, especially in rural areas, is minimal.

Of the services (food, health, education, etc.) that are available in southern Sudan, many are delivered by nongovernmental organizations and United Nations agencies. Managing expectations in the post-referendum period will be essential, because if citizens maintain high expectations, and the Government of Southern Sudan continues to struggle to deliver services, the discontent created can be dangerous.

Will we see mass movements of people either to the north or south?

Would the split have any impact on Darfur?

TEMIN: This is an important question that doesn’t get enough attention, especially given recent accusations by the north that the south is supporting Darfur rebels. There has been periodic cooperation between southern authorities and Darfur rebels over the years (fighting through proxies is a common practice throughout Sudan).

But if the south secedes peacefully I expect it will limit support for northern opposition groups and turn inwards, focusing on internal challenges (and when President [Omar] al-Bashir visited Juba on Tuesday the southern leader, Salva Kiir, publicly promised that the south would not support any armed northern opposition).

The Darfur rebel movements are likely in a holding pattern, waiting to see what happens in the referendum process and whether it is peaceful or violent. If there is violence, they may see an opportunity to try to force the northern army to fight on two fronts, something it is not eager to do.

You’ve been there in the lead-up to the vote. In your view, what are the chances that violence or even civil war will break out?

TEMIN: I am cautiously optimistic that the referendum process will proceed relatively smoothly and peacefully — and this is a change from my expectations six months ago, when I thought there was a significant likelihood of a southern unilateral declaration of independence and substantial violence.

Preparations for the vote have been impressive and recently the international community, including the U.S., has done a good job sending a unified message that the referendum should happen on time and the results should be respected.

There likely will be some local violence around the referendum process, as Sudan can be a violent place, but what will be essential is not allowing that local violence to escalate and become politicized. Ultimately, it is up to the leaders in northern and southern Sudan to ensure that doesn’t happen.