Sudan in the Spotlight on Sidelines of U.N. Assembly 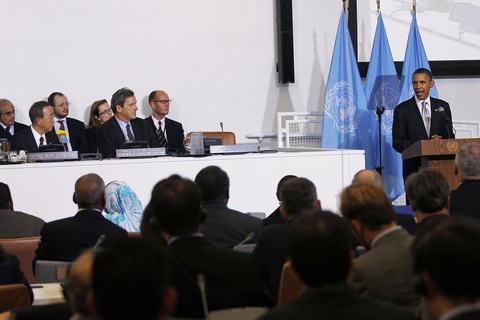 On the heels of his speech to the U.N. General Assembly, President Obama threw his weight behind other U.N. members Friday urging Sudan to carry out its January referendum on southern independence peacefully and on time.

Southern Sudan will vote on whether to secede from the North on Jan. 9. But issues such as demarcation of the north-south border, division of oil revenue, and security still need to be resolved.

Analysts fear that the country could break out into civil war if the issues are not settled by the time the southern population votes. Residents of the town of Abyei, who live along the north-south border cutting across the country, also are voting in January on whether to join the North or the South.

The “urgent situation” in Sudan demands the attention of the world, Mr. Obama said at the meeting in New York.

Present at the summit were Salva Kiir, president of South Sudan, and Vice President Ali Osman Taha representing the Khartoum government in the absence of Sudan’s President Omar al-Bashir, who faces an international arrest warrant for war crimes and crimes against humanity.

At the meeting, Kiir and Taha pledged to work toward a sustainable and peaceful relationship no matter what the referendum’s result is, and both called on the international community to help.

But while welcoming the international community’s support, Taha also criticized the “extreme rhetoric” coming from some corners, including the International Criminal Court’s actions seeking Bashir’s arrest. He urged the end of sanctions and said Sudan needs to be taken off the list of countries harboring terrorists.

January’s referenda on southern Sudan and Abyei were mandated under the Comprehensive Peace Agreement of 2005, which ended years of fighting between the Muslim-majority North and Christian and animist South.

The two Sudanese leaders were expected to sign a communiquÃ© later Friday saying, “The CPA parties (north and south) expressed strong commitment to make all efforts to ensure peaceful, credible, timely, and free referenda that reflect the will of the Sudanese people of these areas,” according to a draft obtained by Reuters.

President Obama also spoke of the continued violence in Darfur in western Sudan, saying nations should have no tolerance for spoilers who won’t engage in peace talks, and that genocide should not be accepted by anyone.