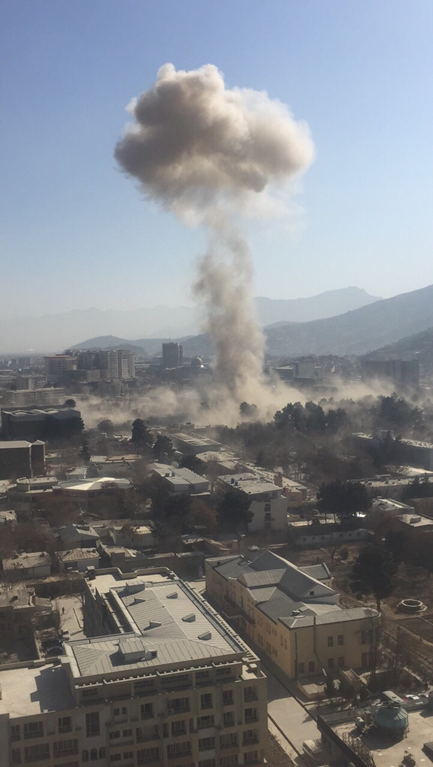 Smoke rises from an ambulance attack in the Afghan capital Kabul on Jan. 27. Photo courtesy of John Iliffe

Taliban militants driving an ambulance packed with explosives passed through two checkpoints before detonating the bombs on a crowded Kabul street on Jan. 27. More than 100 people died that day in the blast.

John Iliffe and his colleagues could feel their building shake in another part of the city. “As high the smoke goes up, the blast wave goes much wider,” he said.

The frequency and speed of these major, pre-planned attacks have never been higher, said Iliffe, who has worked in Afghanistan since 2001 and currently has a security role for a nongovernmental organization. The ambulance blast was one of six major attacks by Taliban and Islamic State militants in and around Kabul in the past five weeks, including a 12-hour siege on the Intercontinental Hotel, where gunmen roamed from room to room, looking for foreigners.

Other incidents included a car bomb attack at Save the Children’s offices in the eastern city of Jalalabad on Jan. 25, which killed six people. A few days later, an early morning shooting rampage on a military academy in Kabul left at least 11 troops dead. 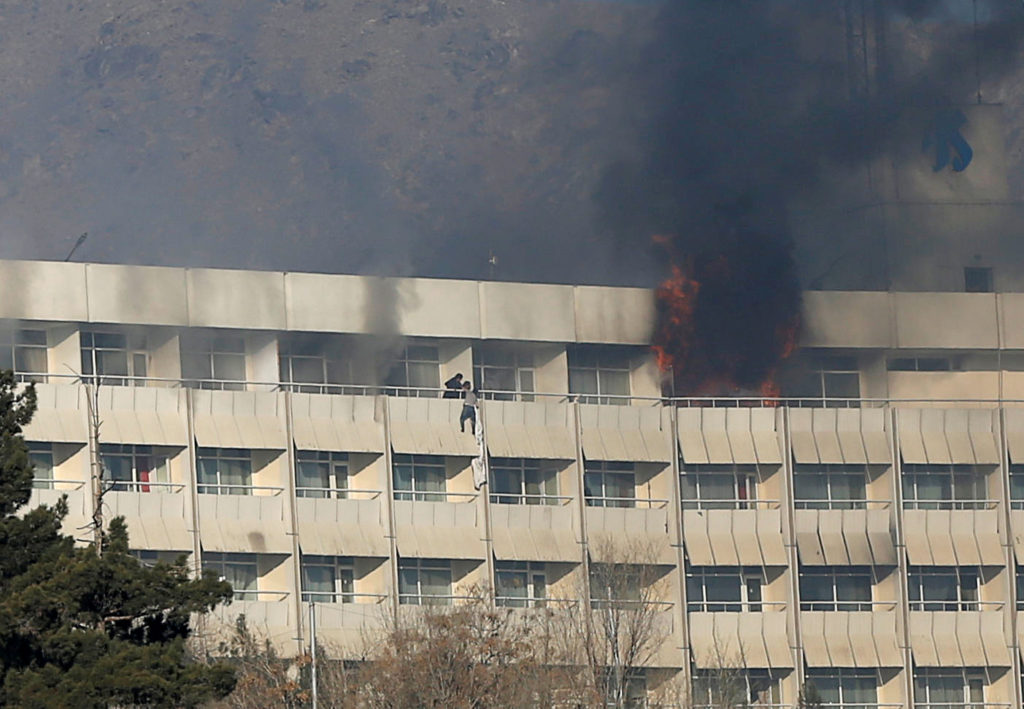 A man tries to escape from a balcony at Kabul’s Intercontinental Hotel on Jan. 21 during an attack by gunmen in Afghanistan. Photo by Omar Sobhani/Reuters

Ghani blamed neighboring Pakistan for sheltering and aiding the leaders of the Taliban insurgency, which Pakistan has denied. “We are waiting for Pakistan to act,” Ghani said Friday in a televised address.

The U.S. State Department announced last month that it was suspending nearly $2 billion in military aid to Pakistan for failing to “act decisively” against Taliban extremists. In response, Pakistan halted intelligence-sharing with the U.S.

What’s the toll on the population?

The relentless violence is wearing on local residents, including lowering productivity when workers are distracted and worried, said Iliffe. Some residents have started carrying notes in their pockets with their name, age and blood type, to make it easier for relatives to find them in hospitals if they get caught in an attack.

“People are feeling vulnerable to go about their day-to-day life,” Iliffe said. At street markets, “you see some poor guy trying to sell balloons or water cans cowering in a corner.”

In general, people are limiting their movements around the city for fear of further attacks and kidnappings, he continued. “There’s really no social life in Kabul anymore.” 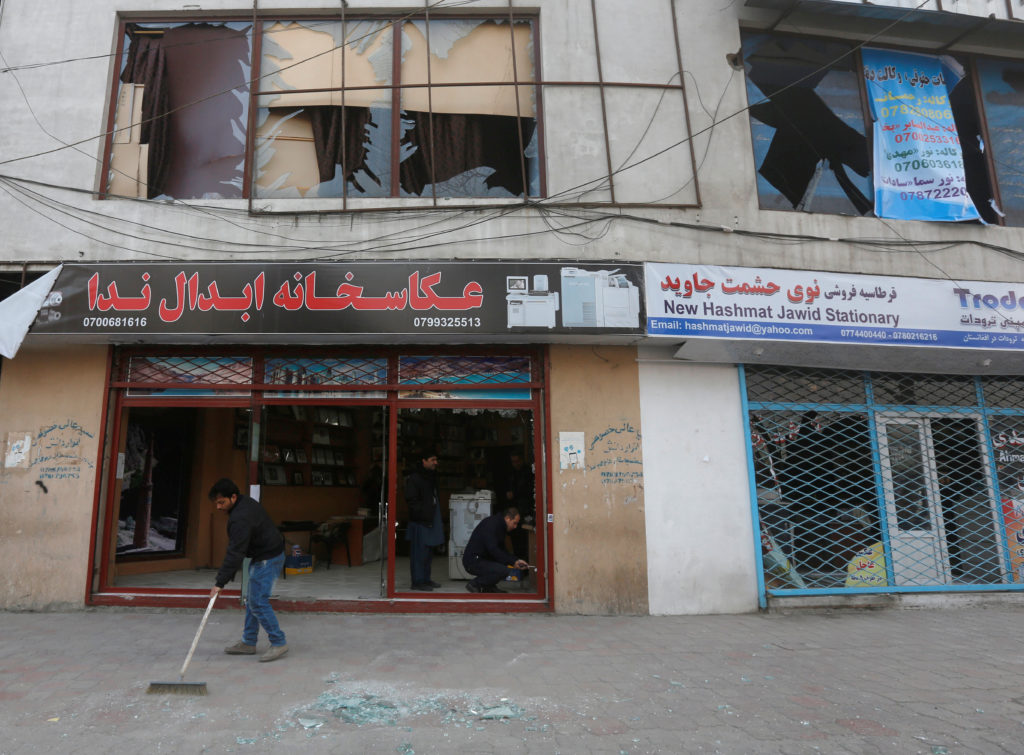 An Afghan shopkeeper sweeps glass from broken windows near the site of a bomb attack in Kabul, Afghanistan on Jan. 28. Security forces work quickly to contain sites of attacks, and cleanup usually finishes within a day, to help life return to normal. Photo by Omar Sobhani/Reuters

What do the insurgents hope to achieve?

Armed with a new Afghanistan strategy announced in August, the U.S. military and Afghan forces have stepped up an offensive against the Taliban, and the increase in attacks is a direct result, said Borhan Osman, senior analyst on Afghanistan with the International Crisis Group.

The airstrikes are restricting the Taliban’s ability to move freely on the battlefield, so fighters are lashing out in urban centers, Osman said. Normally, they would take a break in fighting for the winter, but reports of fatalities are the highest of any winter in the past 16 years. They want to send a signal that they are not weakened, despite what the U.S. generals are saying, he said.

The insurgents also are hoping to shake people’s confidence in the central government by breaching checkpoints and detonating devices at government and military sites. “These recent attacks have underscored the weaknesses of the Afghan security forces,” said Iliffe.

Add to their violence the Islamic State group, which has established a cell in Kabul and is perpetrating attacks in the capital city to grab headlines and attract recruits.

“We’re coming to 16 years post the U.S. invasion and it’s starting to raise questions about the coalition strategy for winning,” Iliffe said.

Left: An Afghan shopkeeper surveys the damages caused by a bomb attack in Kabul on Jan. 28. Photo by Omar Sobhani/Reuters