Murals are popping up in and around Kabul, aimed at getting people to think about what’s possible.

ArtLords, based in the Afghan capital, grew from a small group of artists and volunteers who wanted to share — in vivid color — the community’s desire to move from war to peace.

It was 2014, and the band of friends noticed that the government and international community were making most of the decisions for Afghans, said Lima Ahmad, one of the original members.

“We wanted to give a voice to the people of Afghanistan who do not have much of a say in what is happening, but they are the most who are suffering — the young people,” she said. In a population of 34 million, about 63 percent are under the age of 25, according to the CIA Factbook. 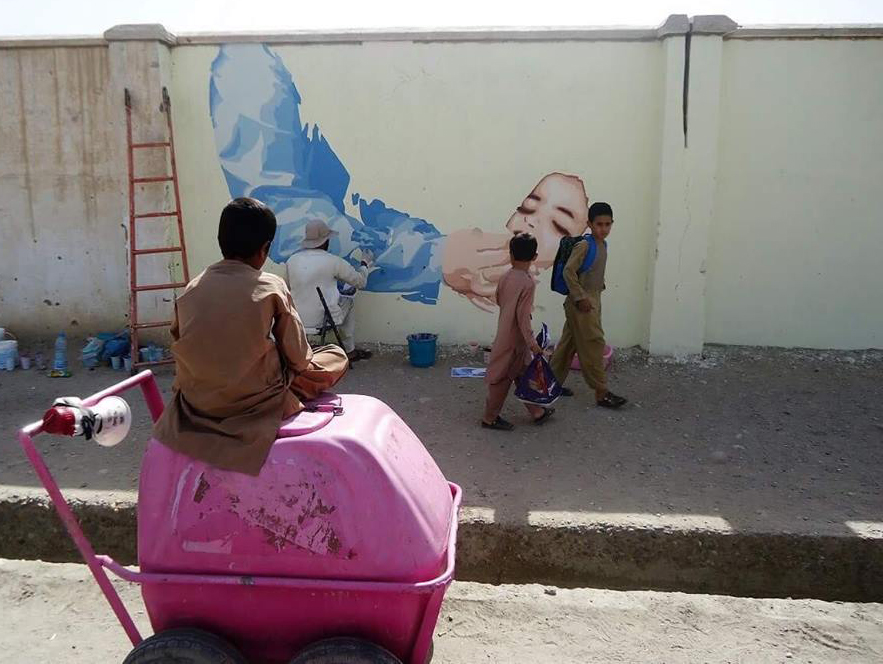 “We have been in such a miserable situation now for more than 40 years. I was born in that kind of situation — war, corruption, civil conflict, ethnic conflict,” said Ahmad. “We have to have a say in how we run the country.”

Street art offered a way to express their concerns and advocate for change in a non-violent way. 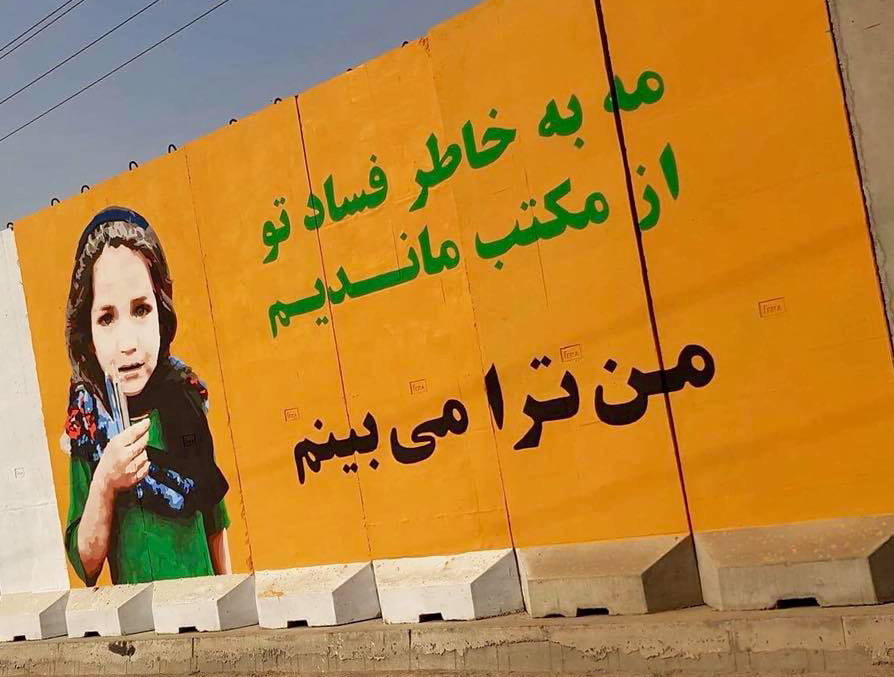 As part of the I See You campaign, a mural with the words “I cannot go to school because of your corruption” features a child selling pens on the streets of Kabul. Photo courtesy of ArtLords

The group, co-founded and run by Omaid Sharifi and Kabir Mokamel, embarked on an “I see you” anti-corruption campaign, said Ahmad, who is currently studying international security and conflict resolution at a graduate school in Boston.

The team arrives at a site at night and with the use of a projector, traces the design on a wall. During the day, they fill in the drawing with paint. As people walk by, the artists explain what they’re doing and answer questions about the subject matter. 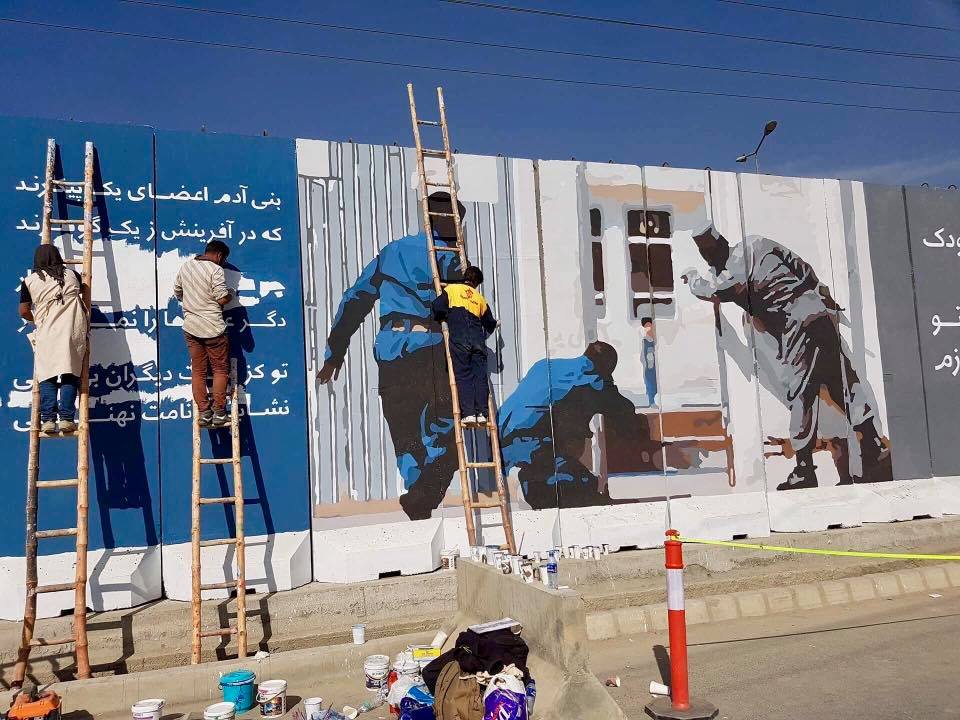 Afghan police beckon to a child after an attack on a mosque in Kabul. “Your bravery will not be forgotten.” Photo courtesy of ArtLords

“Kabul has a security wall around the city, and (the murals are) a way of converting it with colorful messages,” said Ahmad. “We are putting up messages that can make people think.”

In addition to anti-corruption, the murals depict themes of women’s rights and anti-terrorism. One painting honors those killed in a bomb blast that targeted a funeral procession on June 3.

Watch ArtLords volunteers paint a mural honoring those killed in an explosion in Kabul.

Since 2001, after the Taliban fell, women began going to school and taking part in public activities. They also began reporting more street harassment, said Ahmad. “It has become now kind of a cultural thing, so this was one of the things we wanted to work on as an issue.”

In order to raise awareness and squash the harassment, the group targeted university campuses, where men and women both attended school, to paint their messages about gender equality. “They should be aware of how much it has become a part of our society. We have anti-harassment and women-protection laws, but I think it’s more of a behavior change,” she said. 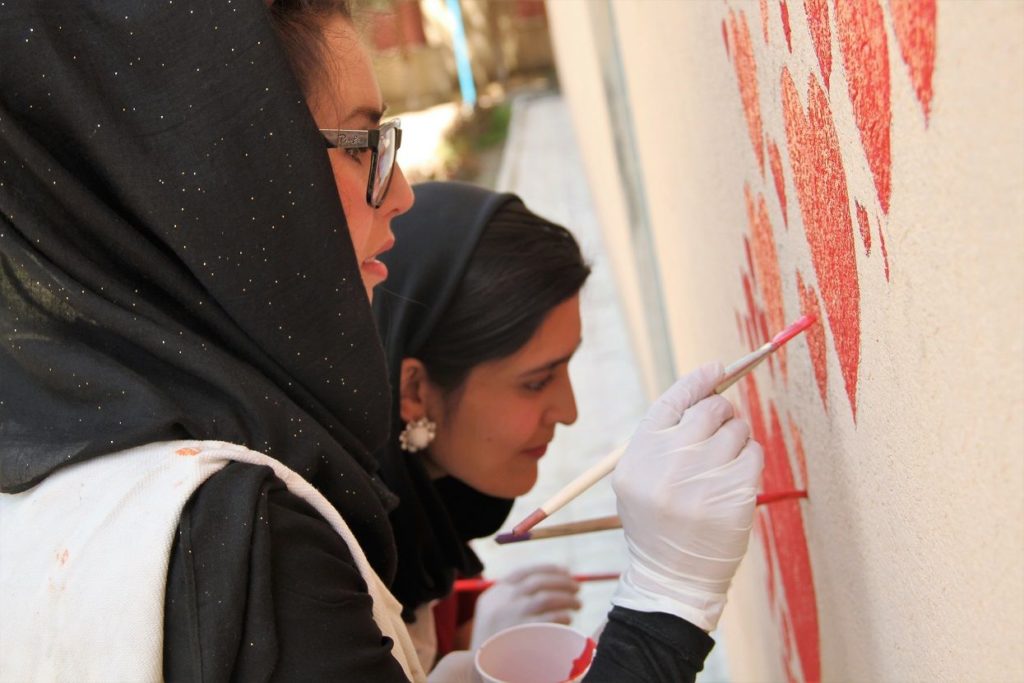 The goal of ArtLords is to get people talking about corruption, harassment and other social issues. Photo courtesy of ArtLords 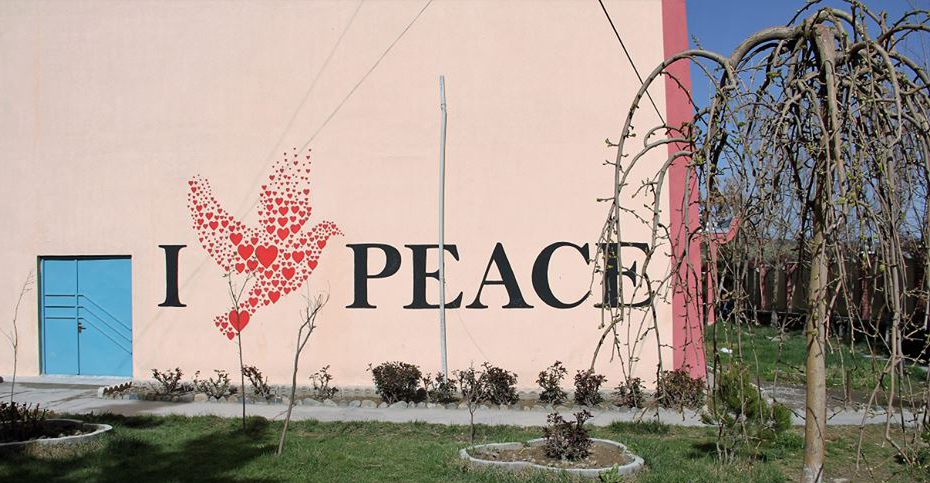 Murals promote a message of peace and healing in a battle-scarred Afghanistan. Photo courtesy of ArtLords

In general, people accept the art, especially when they learn it’s not commissioned by the international community, said Ahmad. “We’re not bringing something from outside. It’s a local phenomenon, whether it’s corruption or terrorism. These are things that are present in their lives.”

Left: A mural addressing harassment of women says "The true and perfect Muslim is the one that other people are safe from his tongue and hand" painted at Professor Burhanuddin Rabbani University in Kabul. Photo courtesy of ArtLords