View a slide show of the top five and bottom five countries in this year’s U.N. rankings.

An annual assessment of 187 countries released Thursday shows the economies of countries such as Brazil and China continuing to grow, but also improvements in areas such as education and income in more than a dozen developing nations.

The 2013 Human Development Report (PDF) issued by the U.N. Development Program takes into account the countries’ economies, education, health and gender equity when ranking them.

As in the last review in 2011, Norway reigns supreme and the United States made the top five, while the African nations of Niger and the Democratic Republic of Congo came in last.

But, the agency notes, Niger and DR Congo — though still struggling with drought and conflict — also are among the nations that made the greatest improvements since 2000 in the areas of school attendance, life expectancy and income growth. They, along with 12 countries, made a Human Development Index gain of more than 2 percent in the past decade. The other countries are Afghanistan, Sierra Leone, Ethiopia, Rwanda, Angola, Timor-Leste, Myanmar, Tanzania, Liberia, Burundi, Mali and Mozambique. 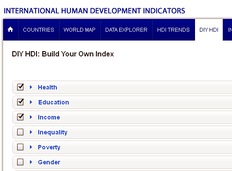 No country with complete data had a lower HDI than it did in 2000, according to the U.N. Development Program. Nations that rated in the low and medium range had faster progress than those in the higher groups.

See all of the countries’ rankings and track their HDI over time in this interactive (by clicking on “Explore Data” in the lower right-hand corner):