View From Juba: The Birth of South Sudan 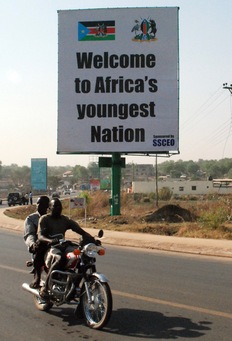 The world’s newest nation, the Republic of South Sudan, formally emerges on Saturday. But even as final rehearsals and preparations for Independence Day celebrations wrapped up in the southern capital city of Juba, the threat of violence was chilling the mood in other parts of the country.

In the days leading up to Saturday’s separation ceremony, Juba residents were scrubbing roads — with the help of some downpours, repainting the exterior walls of houses and sprucing up the main roads with plantings, GlobalPost correspondent Tristan McConnell told us by phone from the southern city on Friday.

Groups of school children practiced their choreographed traditional dances and marching bands strutted down the street.

They will serve as dressing for the main ceremonial moment on Saturday when the old flag of united Sudan comes down and is handed to Sudan’s President Omar al-Bashir — who is scheduled to appear — and the new flag of South Sudan is flown, while the new national anthem, which school children have been practicing for weeks, is sung.

“In Juba, it’s very celebratory,” McConnell said, but in other areas, such as Wao, another city in southern Sudan, the mood is very different.

Many residents of Abyei are camping out in and around Wao and other areas, driven from their homes when the Northern army took control of the town on May 21. The oil-rich border town is claimed by both the North and South. 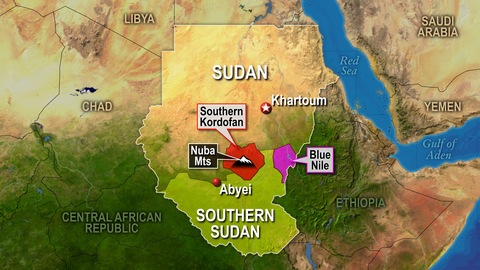 In the state of Southern Kordofan, which contains the Nuba Mountains, fighting between Sudanese government forces and militias that support the South have forced more than 73,000 people to leave their homes since June 5, according to the United Nations, and some fear the violence might escalate. Blue Nile is another state where tensions are high and people worry fighting could erupt.

The tense situations in Southern Kordofan and Abyei are tempering the enthusiasm of some Southern Sudanese. McConnell said one young man who escaped the fighting in Abyei told him, “It’s hard to celebrate when you know that your home is burning.”

To help quell the violence, the U.N. Security Council on Friday approved sending a peacekeeping force of 7,000 soldiers and 900 police to South Sudan, in addition to an earlier approved contingent of 4,200 Ethiopian peacekeepers deployed specifically to Abyei in order for Northern forces to withdraw.

In addition to security, the budding country will have other hurdles to mount, including establishing health care, education and other basic services.

The government of South Sudan has laid out a plan for ramping up services and put new ministries in place to handle them. But it also lacks qualified people to fill civil service slots or even the legislature, said McConnell.

Aid institutions say South Sudan, which had been embroiled in civil war for two decades before a 2005 peace accord was signed, is one of the lowest-ranking countries in terms of development.

“They’re going to have a lot of work to do,” McConnell said. “But on their side is a huge amount of international good will from America and elsewhere, and perhaps even more importantly they also have resources,” such as oil and possibly large reserves of iron ore and other minerals, along with agricultural land.

The question is whether the government, known for its alleged corruption, will choose to use resources to better the lives of its impoverished people or line its own pockets, he added.

McConnell recounts the stories of refugees from the border town of Abyei who fled after Northern forces took control of the town in May.

A New York Times article describes the plight of people in another contested area, the Nuba Mountains in northern Sudan.

Top photo by Peter Martell/AFP/Getty Images. View all of our World coverage.