What do Pakistanis think of Imran Khan’s election victory?

Some anticipated Khan’s victory, but not by such a hefty lead. “We were expecting Imran Khan to win or make a coalition government in the National Assembly, but his clear majority is quite a surprise for us,” said Ahmed Ali, a shopkeeper in Karachi.

Former Prime Minister Nawaz Sharif, of the PML-N party, was ousted last year on charges of corruption and sentenced to 10 years earlier this month. He is currently behind bars.

Critics say that the military and judiciary colluded to remove Sharif from office over fears he was seeking to reduce their authority, and that his conviction was meant to take him out of the running. Concerns about pre-election rigging were magnified as well, when the results from the Election Commission of Pakistan were delayed Wednesday night. But the delay was caused by a software glitch, and the commission and European Union monitors both said the election appeared fair. Despite a suicide attack in Quetta, the capital of the restive Balochistan province, that killed 31 people, the day unfolded relatively smoothly. 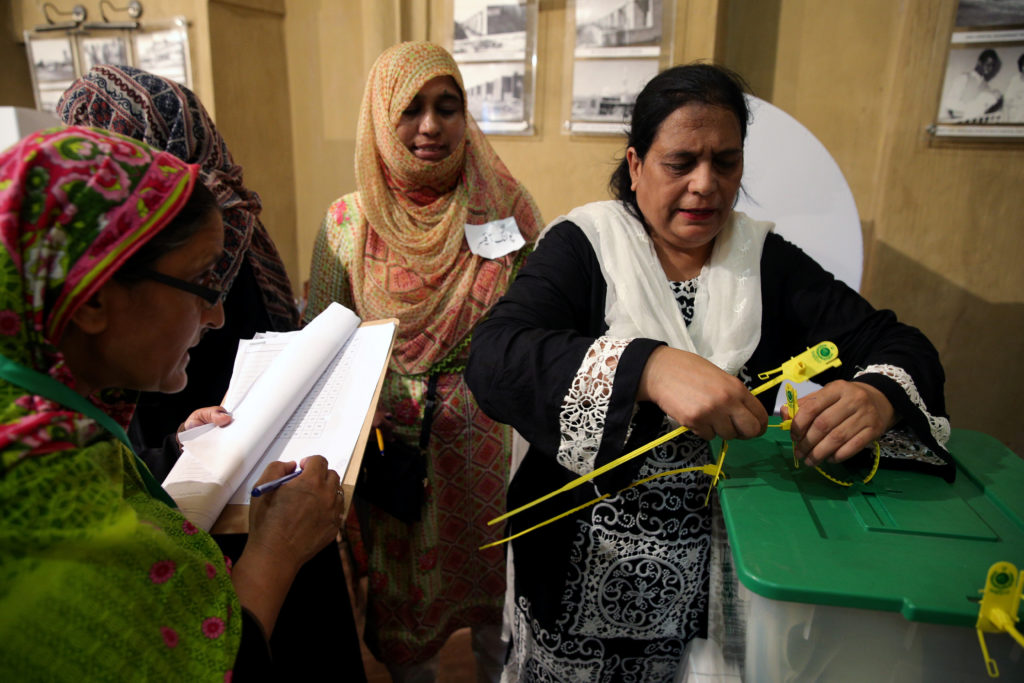 An election official seals a ballot box after polls closed in Islamabad, Pakistan on July 25. Photo by Athit Perawongmetha/Reuters

The results so far show that “People are rejecting the two main parties that had governed Pakistan more or less over the last 30 years,” said Madiha Afzal, a nonresident fellow at the Brookings Institution and author of “Pakistan Under Siege: Extremism, Society, and the State.”

Khan campaigned on a new and clean government, which voters – especially young ones – found appealing, said Afzal. “Both the PML-N and PPP had been mired in corruption and misgovernance scandals, and what people are hoping for with Khan is a new start and a clean slate for the country. So there’s a lot of hope there, because he’s never been in power before.”

He went as far as to say he and his party officials would not occupy the prime minister’s mansion or governor’s houses, instead turning them into “educational institutions or places that could generate funds back for the public,” like hotels, Afzal said.

Khan spoke during the campaign and in his victory speech on Thursday about lifting Pakistanis out of poverty and improving social services, particularly in education and health, Afzal said. Voters appeared to have taken note of the success of a health care system in the country’s northwestern Khyber Pakhtunkhwa province, where his party has been in charge for the past five years, when casting their vote, she added. 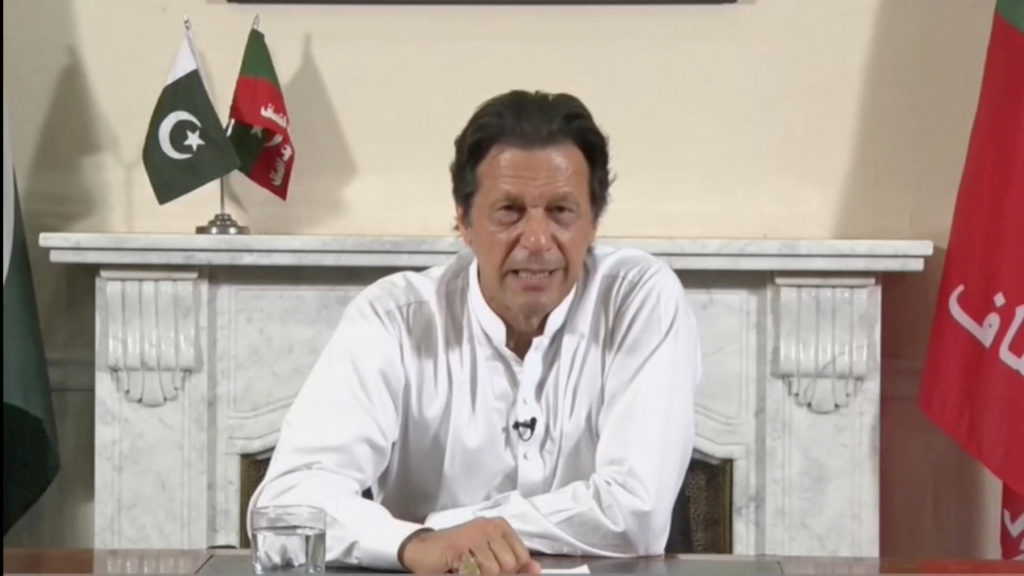 Salma Omar, a social scientist from the capital Islamabad, said she was hoping for an economically stronger Pakistan for all. “Imran Khan should pay immediate attention to rupee depreciation and rising inflation,” she said.

After his win, Khan said that the biggest challenge for Pakistan “is the economic crisis … we have never had such a huge fiscal deficit,” blaming “dysfunctional institutions.”

Khan said he would work to build an atmosphere for doing business. “I think our greatest asset is our overseas Pakistanis … we will fix governance and invite them to invest here.”

Pam Constable, the Washington Post’s bureau chief in Afghanistan and Pakistan, said in a conference call hosted by the Wilson Center that Pakistan “has extraordinary potential in human capital that has been badly underutilized.” If the new government invests in public education, its youth population and human development in rebuilding the economy, it could be the next Mexico, Indonesia or Brazil, she said.

A factory worker in Lahore, who asked that just his first name Farooq be published, said he has high hopes for the new government, citing Khan’s promises of a “peaceful, prosperous Pakistan having quality-based relationships with India and the U.S.” — two major powers that have had fraught relationships with Pakistan over security concerns.

Khan has said in the past that the deal struck with the U.S. in its war on terror was bad for Pakistan. In his speech on Thursday, he took a more conciliatory tone, saying the relationship should be “mutually beneficial,” Azfal said.

“Up until now, [the relationship] has been one way, the U.S. thinks it gives us aid to fight their war … we want both countries to benefit, we want a balanced relationship,” Khan said. 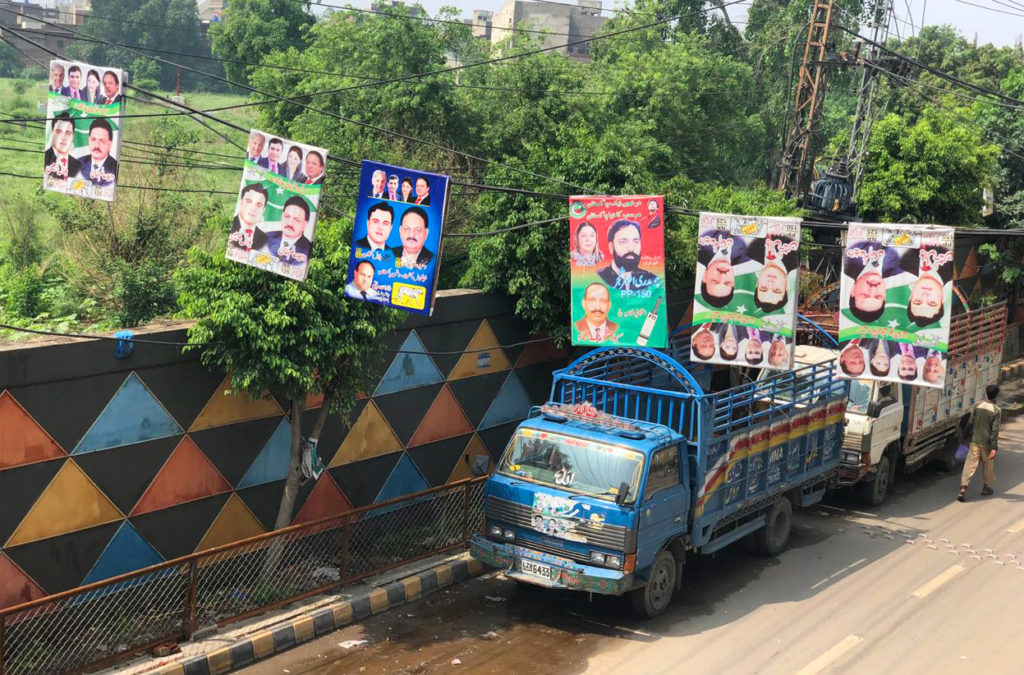 Election banners hang above a street in Lahore, Pakistan. Photo by Sumaira Latif

At times, people have compared Khan’s populist tone with that of President Donald Trump, Afzal said. Trump “might actually like [Khan] because he seems to … take to these kinds of leaders who seem a little bit like him.”

But in terms of the U.S.-Pakistan relationship, Afzal said she didn’t expect much will change. “I think that Pakistan is kind of off the radar for the U.S. right now.”

As for India, Mosharraf Zaidi, a Pakistani columnist for The News in Islamabad, said there was a fear Khan would include an anti-India “dog whistle” in his speech, but he did the opposite.

Khan said Pakistan is ready to improve ties “if India’s leadership is ready. … I say this with conviction: This will be the most important thing for the subcontinent, for both countries to have friendship.”

In general, “if the PTI government is able to deliver on its election manifesto, Pakistan will be one of the leading developing economies,” Saima Kamal, a factory owner in Lahore, predicted.

Farooq said he feels like Khan can get it done. Khan “has a track record as a doer,” based on his influence starting the country’s first cancer hospital, he said — and don’t “forget [Pakistan’s] only cricket World Cup trophy he won in 1992.”

Left: A man polishes his wares at a market in Karachi. Photo by Larisa Epatko/PBS NewsHour