Photos: Vets race to save the last two animals in the Mosul zoo

Updated at 9 a.m. EDT on April 10 | It took months of planning and unanticipated hangups at border crossings, but the Four Paws International team led by Amir Khalil succeeded in removing Lula the bear and Simba the lion from their confines at the damaged Mosul zoo in northern Iraq. “WE DID IT!!! Lula and Simba are at a safe place outside of Mosul! The animals and the FOUR PAWS team are all well,” the animal welfare group wrote on its Facebook page. (Read more about their rescue.)

In the beleaguered Iraqi city of Mosul, the mangled zoo that Islamic State fighters left behind had only two residents left: a female bear named Lula and a male lion, Simba.

The two starving animals were stuck in small cages littered with feces and debris. When veterinary surgeon Amir Khalil of the animal rescue organization Four Paws International entered the zoo last month, he was overcome by the stench.

“I smelled fear, hate, death,” he said this week from Four Paws’ office in Vienna. The Islamic State militants had used the parkland around the Muntazah al-Morour Zoo in eastern Mosul as a staging area for operations. There, they stashed weapons and bombs before Iraqi forces retook control of the eastern part of the city earlier this year. 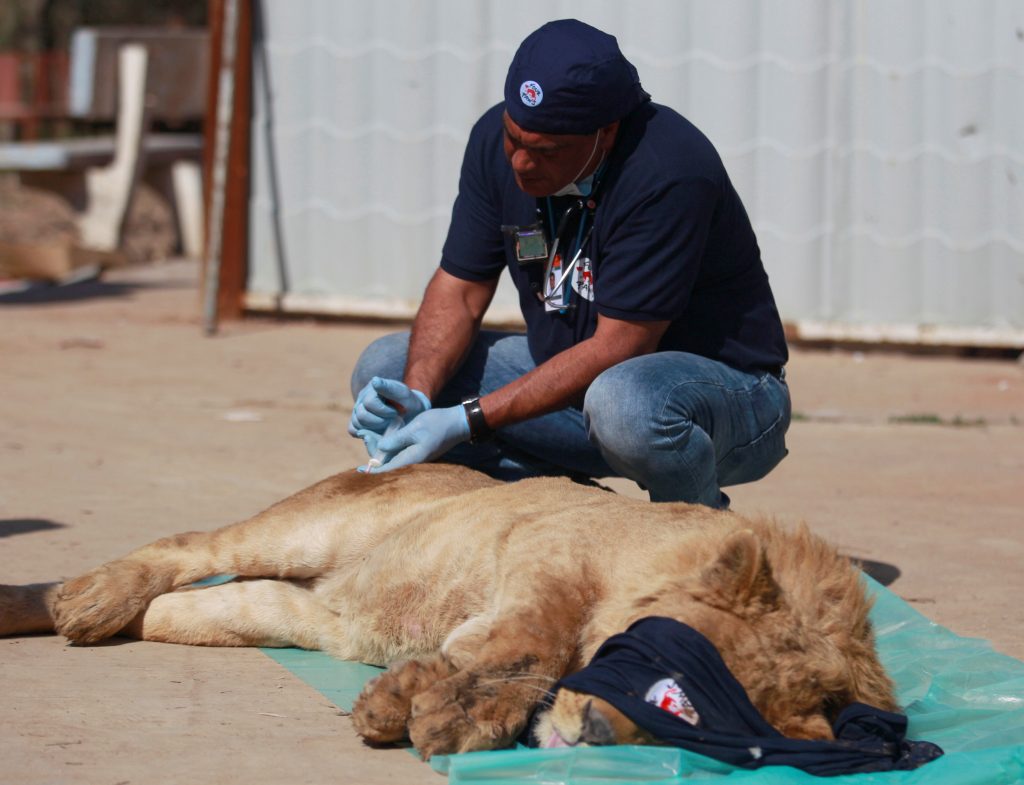 Many shops and homes around Mosul were destroyed in the battle. The difference was people could leave, but the animals could not, Khalil said.

Neighbors of the zoo did their best to feed the animals, but they didn’t have much to eat themselves. When Khalil and his team arrived on Feb. 21, they saw the carcasses of dozens of zoo creatures that had starved to death.

Only Lula and Simba were alive, but in bad shape. They suffered from malnutrition, cuts from their cages, and other problems including pneumonia and tooth decay. 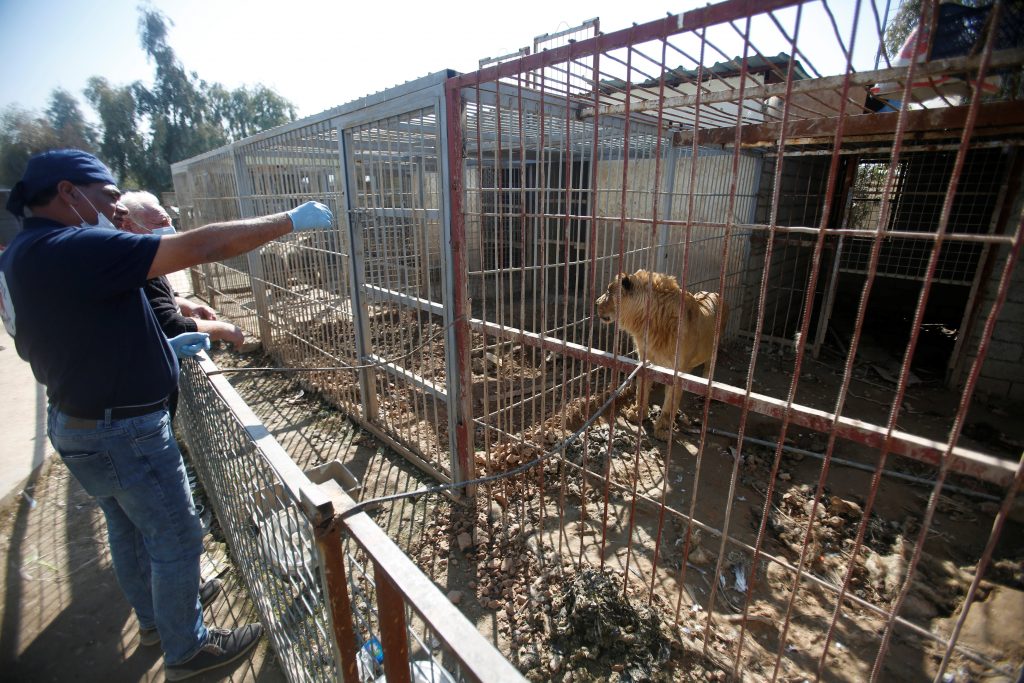 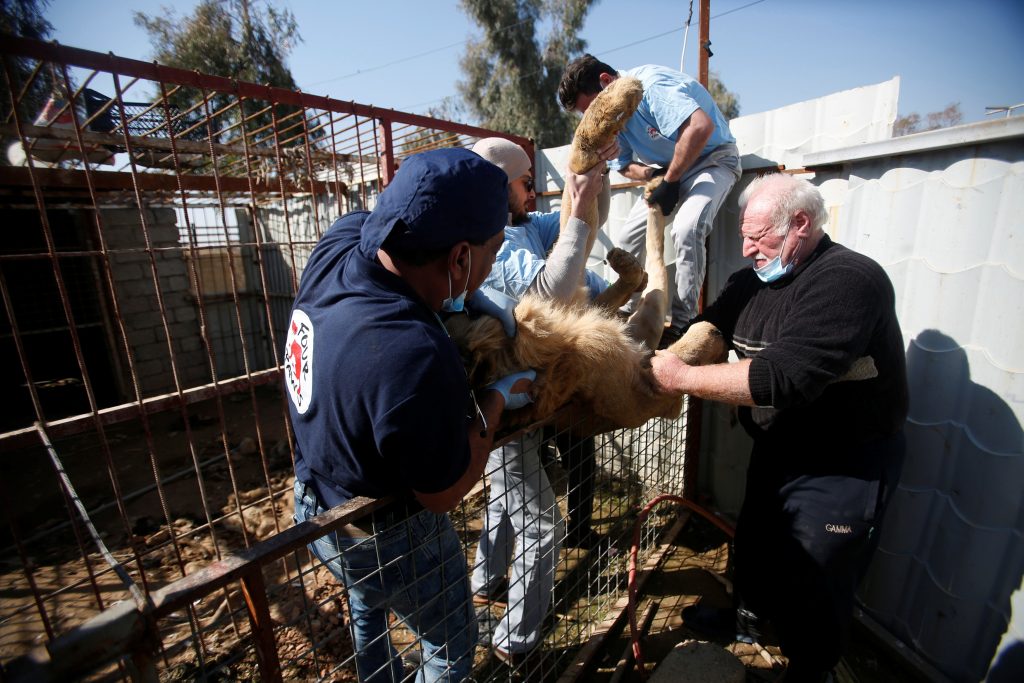 Khalil and his team anesthetized the animals with darts, and gave them medical treatment and vaccinations.

As the team worked, they heard a bomb explode nearby. The western part of Mosul is still under siege, and fighting still could break out on the eastern side. “It is a really risky place,” said Khalil.

Khalil and Four Paws are hoping to move the lion and bear to a sanctuary in Jordan called Al Ma’wa for Nature and Wildlife. The cost to move and readapt the two animals is approximately $50,000 and will require coordination with local and military authorities in Iraq. 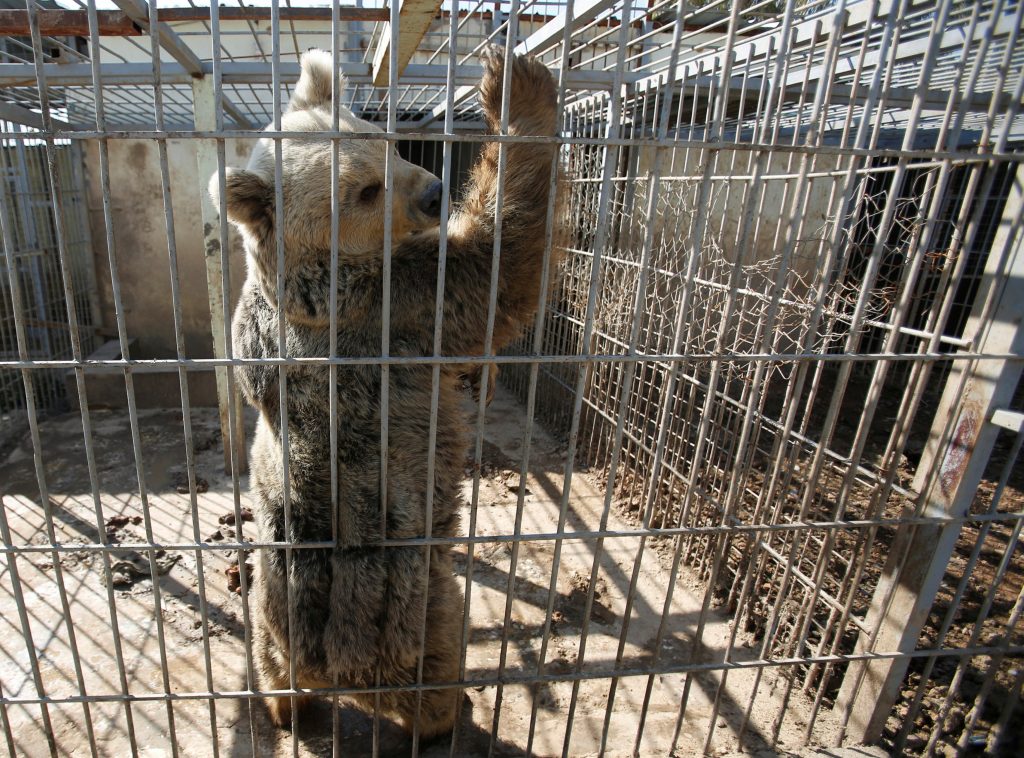 The cages housing Lula and Simba were too small and dirty for the team to work. Photo by Khalid al Mousily/Reuters 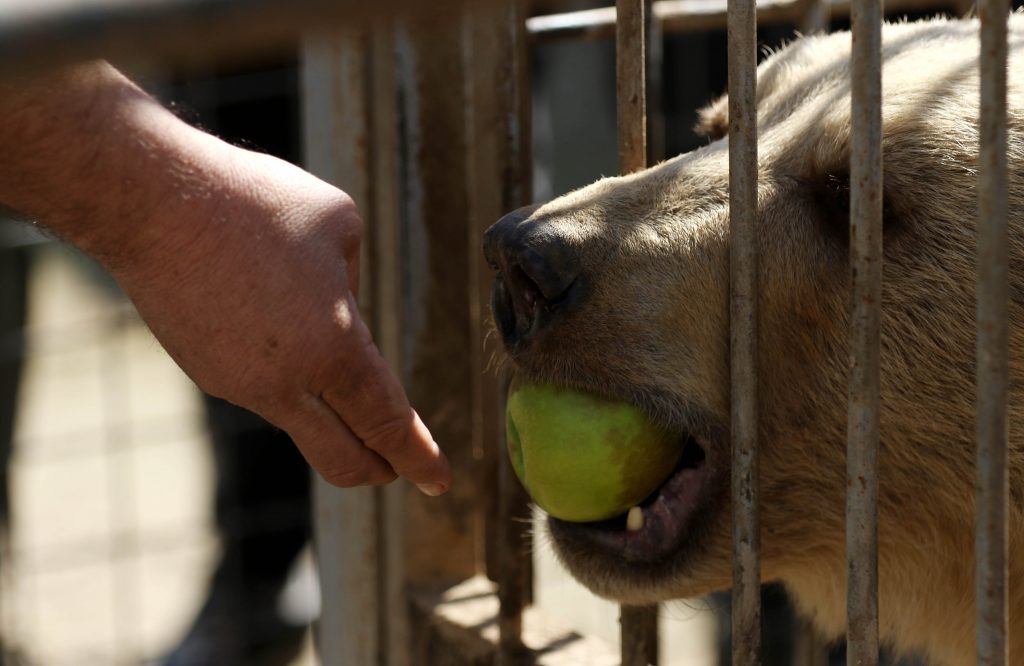 Dozens of other animals, including a lioness and bear cubs, were killed or died of starvation. Here, Lula gets an apple treat when a veterinary team arrived on Feb. 21. Photo by Safin Hamed/AFP/Getty Images

The sanctuary in Jordan, which is a partnership between the Princess Alia Foundation and Four Paws International, houses other lions and a Syrian brown bear, which could give Lula a chance to be socialized with a male bear, he added.

People can show kindness to humans and animals, said Khalil. “We can’t divide humanity like what ISIS (the Islamic State) is trying to do.”

Four Paws gave local residents four weeks’ worth of food and medicine to continue the animals’ care. At that point, the team hopes to return to provide the animals with more veterinary care.

Founded in Austria in 1988, Four Paws has offices in 10 European countries, in addition to South Africa, Australia and the U.S. in Boston. The group works all over the world, helping farm and wild animals directly, and lobbying to improve animal welfare policies. 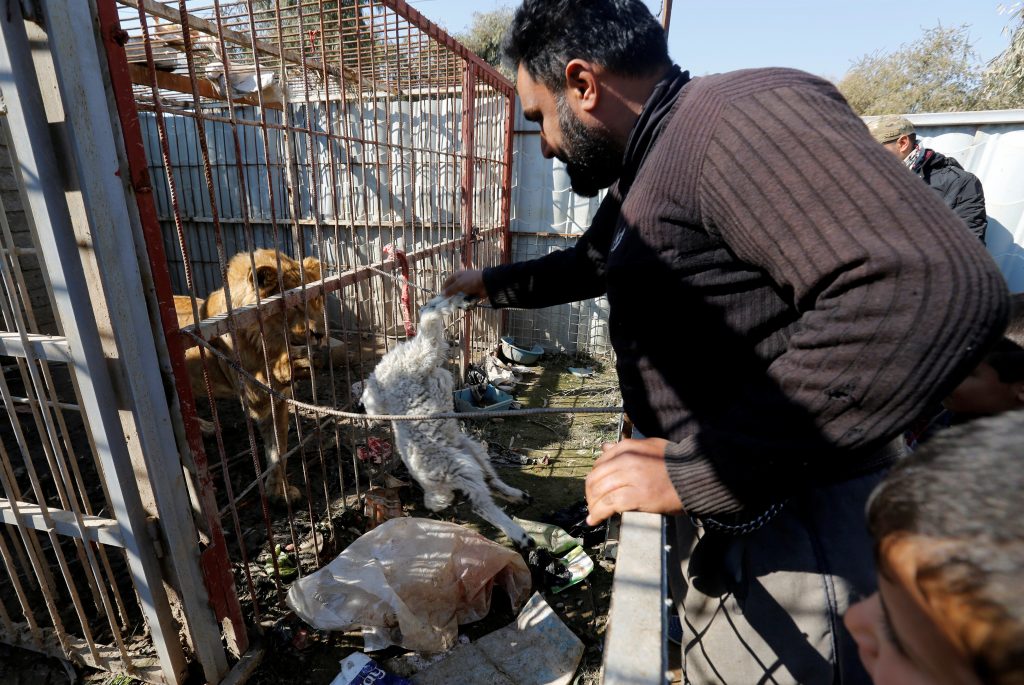 Local residents, who alerted the animal charity Four Paws about the animals’ situation via Facebook, were helping keep them alive by giving them whatever food they could spare. Photo by Muhammad Hamed/Reuters

Warning: The following image may be considered disturbing. 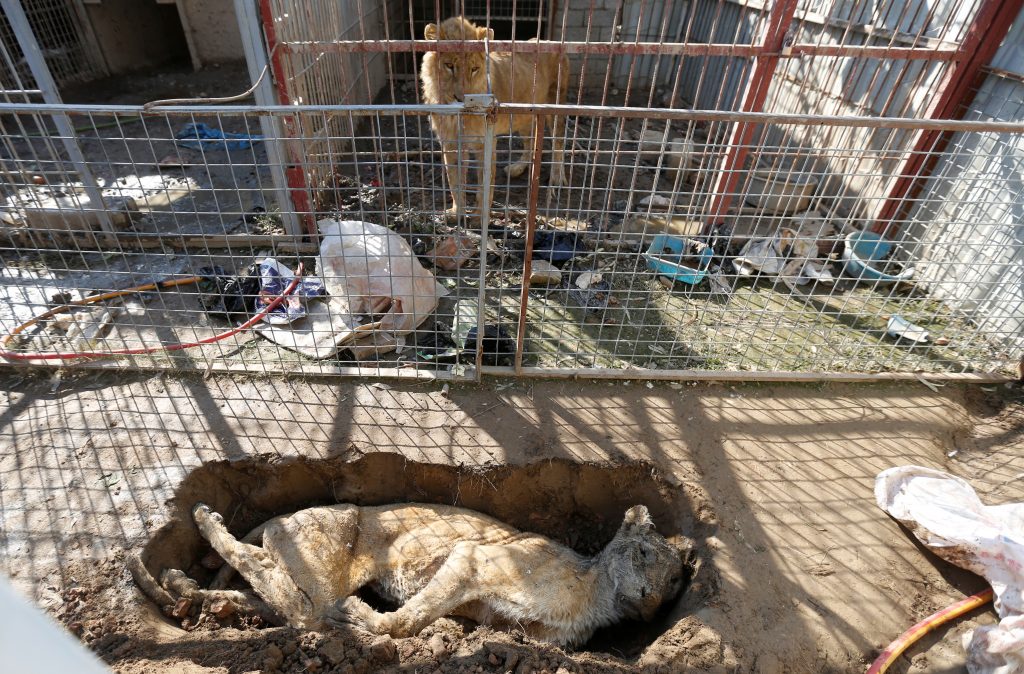 The local residents buried a lioness, who died of starvation, in front of Simba’s cage. Photo by Muhammad Hamed/Reuters

Left: Simba the lion (seen here) and Lula the bear were the only animals left at the Muntazah al-Morour Zoo in eastern Mosul, Iraq, after the Iraqi offensive to retake the city from Islamic State fighters. Photo by Safin Hamed/AFP/Getty Images