Watch the 2012 PBS NewsHour report on HEAL Africa from Democratic Republic of Congo.

Anonciata, a 30-something mother of four, survived a brutal raid on her town in eastern Democratic Republic of Congo, but not without injury.

In 2010, militiamen broke into her home in Rutshuru, demanding she give them her teenage daughter who had fled upon their arrival. When she refused, they beat her and cut off her lips with a machete.

NewsHour special correspondent Fred de Sam Lazaro met Anonciata last year while profiling a group called HEAL Africa based in the eastern city of Goma. The group’s mission includes training medical workers, bringing together faith leaders on issues such as HIV/AIDS, and helping women who have been raped with their physical and emotional recovery.

Anonciata wore a surgical mask to cover her scarred face in 2012.

At the time, Anonciata had missed a yearly visit by a plastic surgeon to her area because she had to leave her home when M23 rebels took over the town. (The Congolese army has since freed the town, the BBC reported.)

When she did get a chance to get evaluated for reconstructive surgery, she learned her case was too complicated for the visiting surgeon, so a doctor who had gotten medical training from HEAL Africa connected her with surgeons in Uganda. Her persistence paid off, and after having had an initial surgery, she’ll undergo a final operation in Kampala on March 12.

When reached through a French translator via email, Anonciata said for the past few years she has only been able to eat porridge, but the surgeries mean she will be able to eat solid foods again.

“If I open my mouth (without pain), and I begin to eat like others, I would be happy,” she said, “but I wonder where I would go after leaving the hospital, because if I go back to my village, the Interahamwe (the Hutu paramilitary organization seeking to overthrow the government) might kill me.”

Thousands of women in eastern Congo face Anonciata’s situation — they’ve been maimed or raped in a country where discrimination is rampant, all because women seem like an easy target, said Judith Anderson, executive director of HEAL Africa/ACT for Congo, who works from the United States on locating funding sources.

“Anonciata is one of many, but she’s a lucky one because she’s had access to care,” said Anderson.

Decades of turf wars among ethnic groups and rebel forces in eastern Congo have killed millions and displaced an estimated 1.7 million Congolese, according to the U.N. refugee agency. Rape is used by armed groups to intimidate and demoralize communities, and perpetrators are rarely prosecuted, the United Nations says.

Rape victims are then often ostracized in their communities, which compounds their trauma, said Louise Bashige, the gender-based violence coordinator for IMA WorldHealth’s Ushindi program. Ushindi began in 2010 as a five-year program seeking to help women with medical, legal, psychosocial and economic services. Ushindi’s international partners include the American Bar Association Rule of Law Initiative, Save the Children and CARE.

Bashige, Congolese herself, works in North and South Kivu and Maniema provinces in eastern Congo. She said there is a deep-seated view that “the intellect of women is that of a child. Many people in the Democratic Republic of Congo, including women, are blinded by this belief.”

One of the challenges is illiteracy, particularly among women, she said. According to the CIA World Factbook, in the central African country of 73.6 million people, the literacy rate among women is 57 percent, while among men it’s 77 percent. 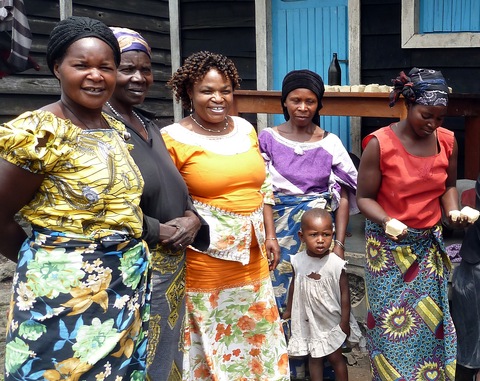 To try to counter the gender bias, Ushindi provides literacy programs and parent training, and sets up youth groups that bring together boys and girls so they can learn to communicate and value each other, said Bashige.

There have been some improvements in the country, including enactment of a law that sets the legal age for consent to marriage at 18, which marked a shift in tribal practices that let girls as young as 12 be handed over as someone’s wife, said Anderson. Now, it’s just a matter of educating community leaders and residents about the changed law to make sure it’s enforced, she said — no small feat in a nation where law, order, electricity and medicine are virtually nonexistent in many parts.

The country still has a long way to go, but “what gives me hope is the general desire among women to make a change. They want to learn to read. They want to learn new skills,” said Anderson. One of the side effects of people being forced to move around the country is that women can see what’s happening in other areas and how they can make their lives better, she added.