From Reeds to Roads: Bamboo Bikes in Ghana

When Columbia University professor John Mutter went to Ghana in 2007, he noticed how necessary a reliable source of transportation was to people’s livelihoods and wellbeing.

“You can’t go to any of the poorer countries in Africa and not be struck by how many people get around by walking or bicycling,” said Mutter.

With roads in generally poor condition, it can take a long time to get from place to place, he said. Even the seemingly simple task of getting cash crops to market can be formidable.

“It’s pointless to grow vegetables for a market if you can’t get to the market” or keep track of market prices, he said. “Transportation can really be an inhibitor.”

So it made sense that many people got around by bike, but many of those bikes were meant for paved roads, and were very heavy and poorly made.

Bamboo was the natural solution, specifically a bike frame made of the sturdy shoots. Mutter was in Ghana as part of The Earth Institute at Columbia University’s Bamboo Bike Project.

He and a team of scientists and engineers, including David Ho and Marty Odlin, worked on designing, building and testing the sustainable bikes.

A business plan determined that a price of about $55 to $65 per bike would be competitive and affordable, and cover the cost of materials. The project focused on the town of Kumasi, Ghana, as a possible location for a production facility.

A Ghanaian investor came on board, the factory was built, and local workers trained in what became known as Bamboo Bikes Ltd. This year, the factory will assemble some test bikes to make sure they hold up well in the rugged environment, and then eventually build the bikes for public consumption. 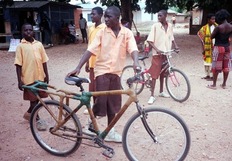 Residents of other areas of Ghana, Uganda and Zambia also are using bamboo bikes more and more. The frame is shaped by bamboo, but the wheels, handle bars and seats are made of conventional materials.

In Africa, it’s not too difficult to build latrines in a village, for example, Mutter said. “But the problem in Africa is you need 100 million latrines and a comprehensive water system.”

Similarly, one of the aims of the Bamboo Bike Project was to enable a way of scaling up production from a local to a regional and national level, even moving the model to other countries, he said.

Paulo Cunha, who as program coordinator for Columbia’s Millennium Cities Initiative is helping with the business and operations aspects of the Bamboo Bike Project, said the keys to scaling up are a solid business model, being conscious of the incremental steps involved, and proper testing and marketing.

The project, while not a hugely profitable endeavor, at least at first, has the potential for growth and is getting attention in sustainability circles for using local labor and resources, said Cunha. Some charities also have taken notice and offered to purchase bikes for residents and use by non-governmental organizations.

“I think people want to see this be a success story,” he said. “There’s this perception of investing in Sub-Saharan Africa as being risky or something that’s non-desirable, and I think we’re showing that if you want to approach a project like this the right way, you have the pieces in place and you have a committed investor, then you can have investment success stories.”