When first-grade teacher Alejandro Gac-Artigas noticed it took his North Philadelphia students until Thanksgiving to return to the level of reading they had achieved before leaving for summer break, other teachers told him, “’That’s just the summer slide,’” he said. “As if it were a law of nature that growing up poor, for every two steps you take forward during the year, you’re going to take a step back during the summer.”

He looked into the research, including a Johns Hopkins University study showing that in low-income areas, summertime learning loss during elementary school has a cumulative effect and accounts for two-thirds of the achievement gap seen later during high school.

“But none of [the research] could answer for me — why is summer slide unique to low-income communities,” Gac-Artigas said. “Wealthier kids have every bit as long a summer vacation and they’re not going backward. What’s the difference?”

He realized “summer slide” is a symptom of a deeper problem. “Low-income parents have largely been left out of the process of educating their kids, and too often our system treats them as liabilities rather than as assets,” he said. The time children spend out of the classroom and at home often had little educational value and they experienced disadvantages from it.

“Wealthier kids have every bit as long a summer vacation and they’re not going backward. What’s the difference?”

Gac-Artigas and his sister had moved to the U.S. mainland from Puerto Rico in 1991 because their parents wanted them to get a better education. “Growing up poor with lots of ambitions taught me two things,” he said. “One is that a kid’s education involves much more than just their schooling, and the second is that a parents’ love for their children is the single greatest and most underutilized natural resource in education.”

In 2012, Gac-Artigas founded Springboard Collaborative to address the literacy disparity through after-school and summer programs aimed at building a collaboration between parents and teachers that encourages parents to read to their children at home.

Parents and teachers are committed to the same goal of helping a child become a successful reader, but the classroom isn’t structured in a way where a child gets consistent individual attention, Gac-Artigas explained. That’s where the parent can step in and give the child much-needed one-on-one time. 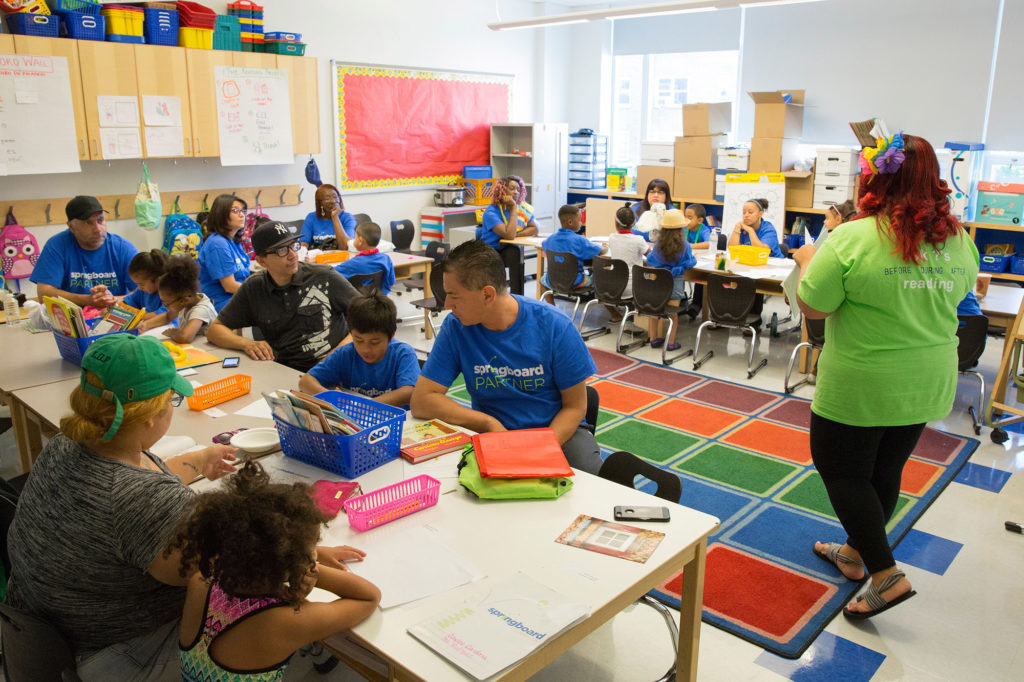 Teachers, trained by Springboard Collaborative, first meet with the families at home, then hold workshops so parents can select books at the right reading level for their children and learn to ask questions before, during and after reading the book.

Springboard equips the families with an initial selection of books ranging in difficulty, and provides incentives for families to attend all workshops, including additional books, backpacks with school supplies, and a tablet computer. “As parents gain the teaching skillset, we want to make sure they have the same tools you’d find in a classroom in order to sustain the progress,” Gac-Artigas said.

Some favorite books are “Jamaica’s Find” by Juanita Havill, about a girl who finds a stuffed dog in a park and feels guilty when she takes it home, “A Birthday Basket for Tia” by Pat Mora about a girl and her cat who plan a surprise party for her great-aunt’s 90th birthday, and “Feast for 10” by Cathryn Falwell about a family shopping for, preparing and eating dinner.

Springboard operates programs in Philadelphia, Washington, D.C., New York City, and the California cities of San Francisco, Oakland, San Jose, Norwalk and Fresno. The number of participating families has grown from about 40 initially to 5,000 this year.

“Our goal is to catalyze a culture shift in the national education field that makes family engagement a matter of course.”

“Our goal is to catalyze a culture shift in the national education field that makes family engagement a matter of course. It’s our ambition and our charge to prove that all parents can teach, and I think that if we can accomplish that then we can change the conversation, the way resources are being spent, the way decisions are being made in a way that can actually affect the entirety of our target population.”

To try to do that, Springboard is exploring new ways to operate, including developing a mobile app for families to track their reading goals, and exploring the possibility of franchising the programs so they can function independently.

Parents who get involved tend to be enthusiastic, Gac-Artigas said. “Many of the families we work with have learned the hard way of just how important it is for a child to have a better educational experience than they did. They’re hungry for an opportunity to ensure their child has a better future.”

And the children? He laughs. “When a kid thinks about summer school, it isn’t always a joyful association.” But Springboard aims to be different than traditional summer schools, including grouping children by reading level rather than grade-level so they don’t feel constantly behind, and having the children identify the reading skill that they want to achieve.

“The fact that the parent and teacher are working together to help that child reach their goal is a pretty unique and exciting experience,” he said.