WASHINGTON – Lelia Parker grew up on a farm in rural Virginia and moved to the U.S. capital 30 years ago, seeking a more urban environment. But she still gets the gardening itch.

Down the street from her Southeast D.C. home is a community garden, where tidy beds of succulent zucchini, peppers and squash grow.

The garden is operated by the nonprofit group DC UrbanGreens. Not long ago, Parker discovered the site and began telling her neighbors about it and about how to cook with fresh vegetables instead of canned. Now she’s a board member and the group’s outreach coordinator.

Julie Kirkwood, a construction project manager, and Vincent Forte, a lawyer, started DC UrbanGreens three years ago, with a goal to help provide low-cost fresh produce to people living in an area without easy access to grocery stores.

“A place where you take care of the outdoors, I think the air will smell better. People will feel better.” — Jacquana McIntyre

They studied successful urban gardens in other states and learned about grant writing to fund theirs. They utilized neighborhood ambassadors like Parker and added two more sites. Now, they have three mini-farms in parts of southeastern D.C. labeled by the U.S. Department of Agriculture as food deserts — places usually in low-income areas that lack fresh fruits and vegetables.

They gradually accumulated seven paid staff members, but surprisingly never had to advertise the new posts. People just came to them, from a variety of backgrounds and skill sets. They were drawn to the gardens and “never left,” as the co-founders recently put it.

“There’s something to the fact that this staff was built this way. They’re wonderful individually and wonderful together,” said Kirkwood. 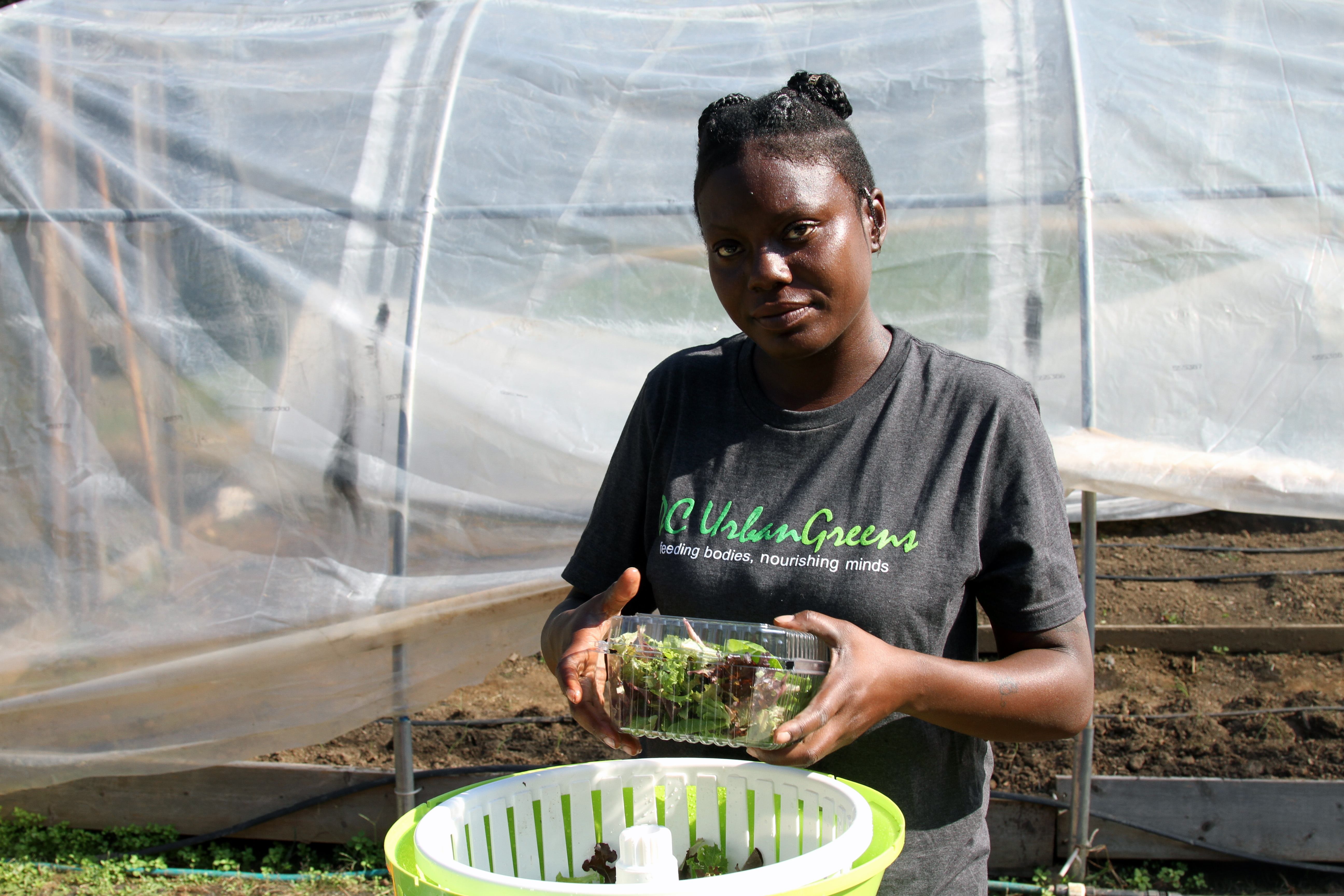 Jacquana McIntyre started as a volunteer and now manages one of DC UrbanGreen’s farms at Fort Stanton in Southeast Washington, D.C. Photo by Larisa Epatko/PBS NewsHour

Jacquana McIntyre is another D.C. resident who started as a volunteer and later put down roots with the group.

“I always wanted to work outside,” she said. The former children’s day care worker noted that kids enjoy digging in the earth and learning how plants grow. But if they’re scolded for getting dirty, they tend to lose that curiosity.

Now, McIntyre manages the newest DC UrbanGreens farm at Fort Stanton and sees it as an opportunity to revive that wonder. Children can pick out a flower by color and plant it, and in the process learn about the purpose of dirt, she said.

“It’s not really all that hard to learn how to plant or be a gardener. It just takes some patience,” she said. A garden can grow anywhere once you clear out the brush and debris. “A place where you take care of the outdoors, I think the air will smell better. People will feel better.” 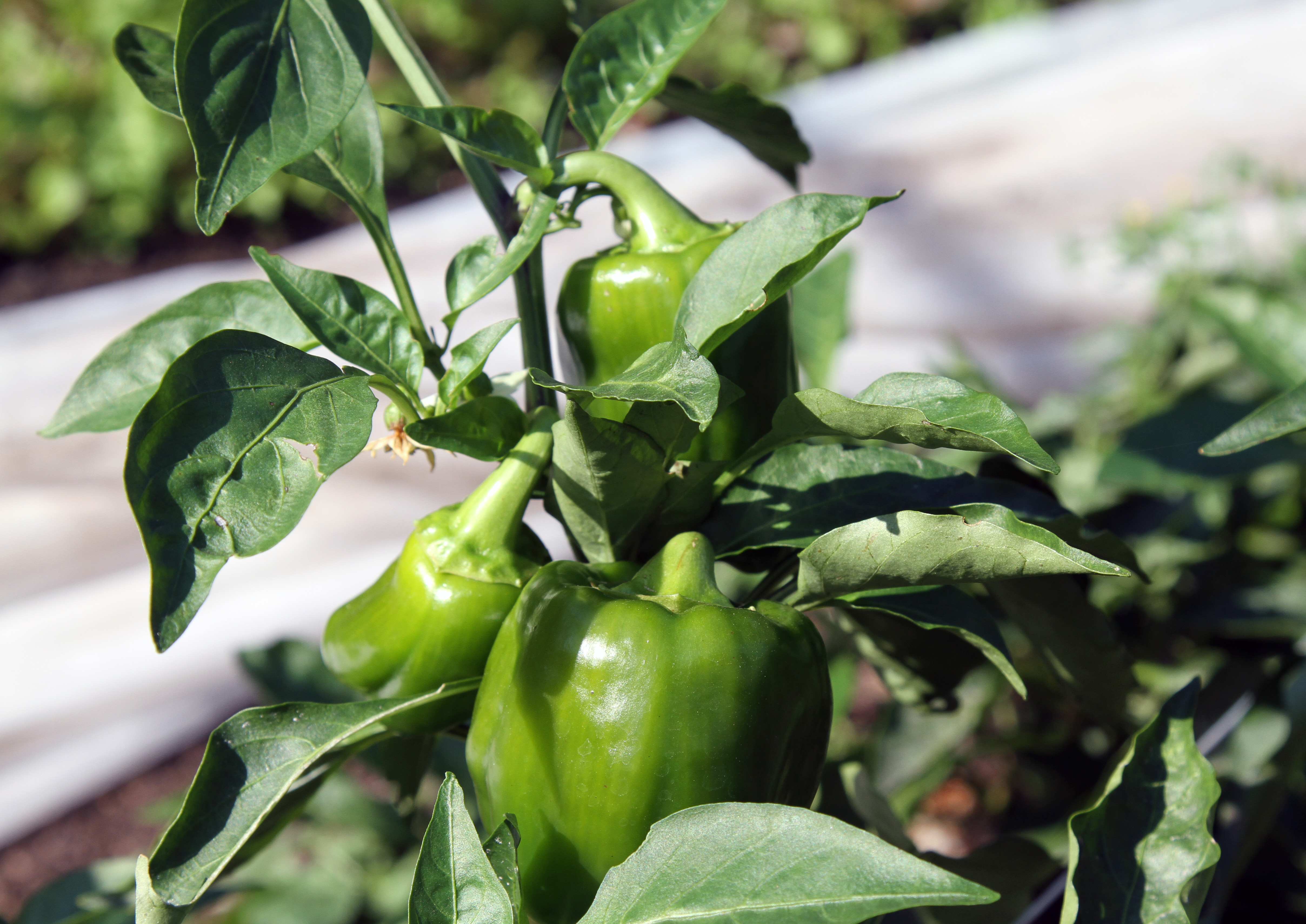 The gardens produce peppers, two kinds of eggplant, carrots, spinach, Swiss chard, kale and a variety of herbs. Several days a week, the group sells the produce at farm markets and delivers to residents in zip code 20019, a designated food desert. Photo by Larisa Epatko/PBS NewsHour

DC UrbanGreens sets up farmer’s markets at the Fort Dupont Ice Rink, in addition to other sites around the city including the Unity Health Clinic and the Riverside Healthy Living Center. WIC and SNAP food assistance grants are accepted as payment.

The garden is helping residents discover new produce. Parker said her neighbors knew about collard greens, turnip greens, sweet potatoes and white potatoes. But Swiss chard was a mystery, as were ways to cook it.

“A lot of my people, the only way they know how to cook their vegetables is with turkey necks or ham hocks and boil them until all the nutrition is gone,” she said. Her mantra: Keep it crispy so the nutrition is still there. 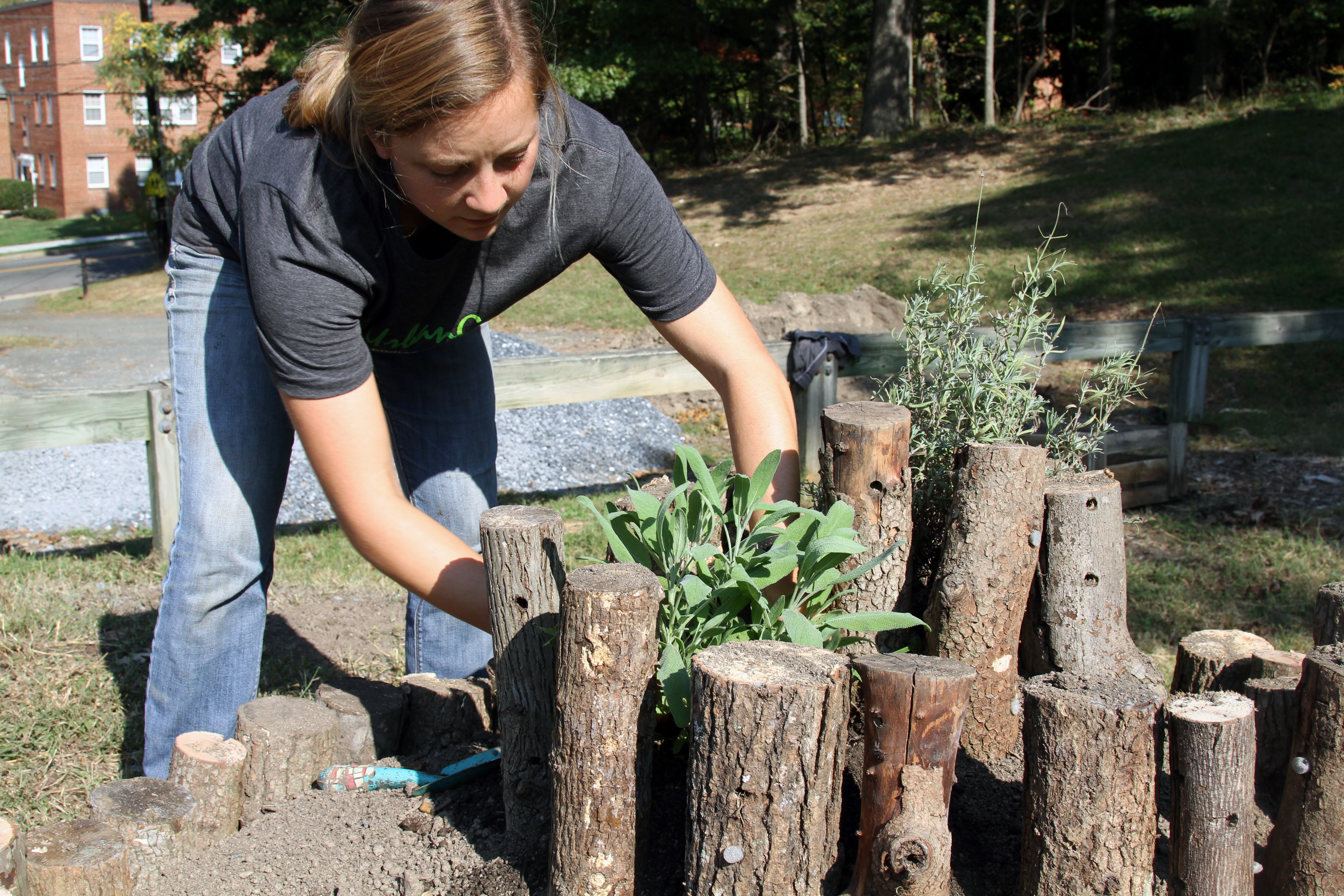 Avery Snipes ended up at DC UrbanGreens through a fellowship program that normally places its participants in a congressional office. Here, she plants herbs in a “spiral” garden that tiers plants according to their water needs. Photo by Larisa Epatko/PBS NewsHour

People, including SNAP participants, tend to frequent those stores because “they have the major foods needed and tend to offer the lowest prices,” she said. “We don’t have good measures across the nation of where community gardens are, who’s using them and how much they’re getting them.”

But even data about big stores doesn’t provide easy answers, she said. “Even if a store is nearby, [residents] might not go there. They’re going there for price, quality, if it’s on the way to work, etc. Proximity to a store is not everything.”

Parker, who lives near the community garden, agreed that putting a large grocery store in one part of Southeast wouldn’t be the answer anyway. “There are a lot of elderly people here with disabilities,” who can’t get around easily. So it still wouldn’t be convenient for them to get there, she said.

Community farms, meanwhile, might have a big impact on nearby residents’ lives, but it might be more of a seasonal option, said Ver Ploeg. 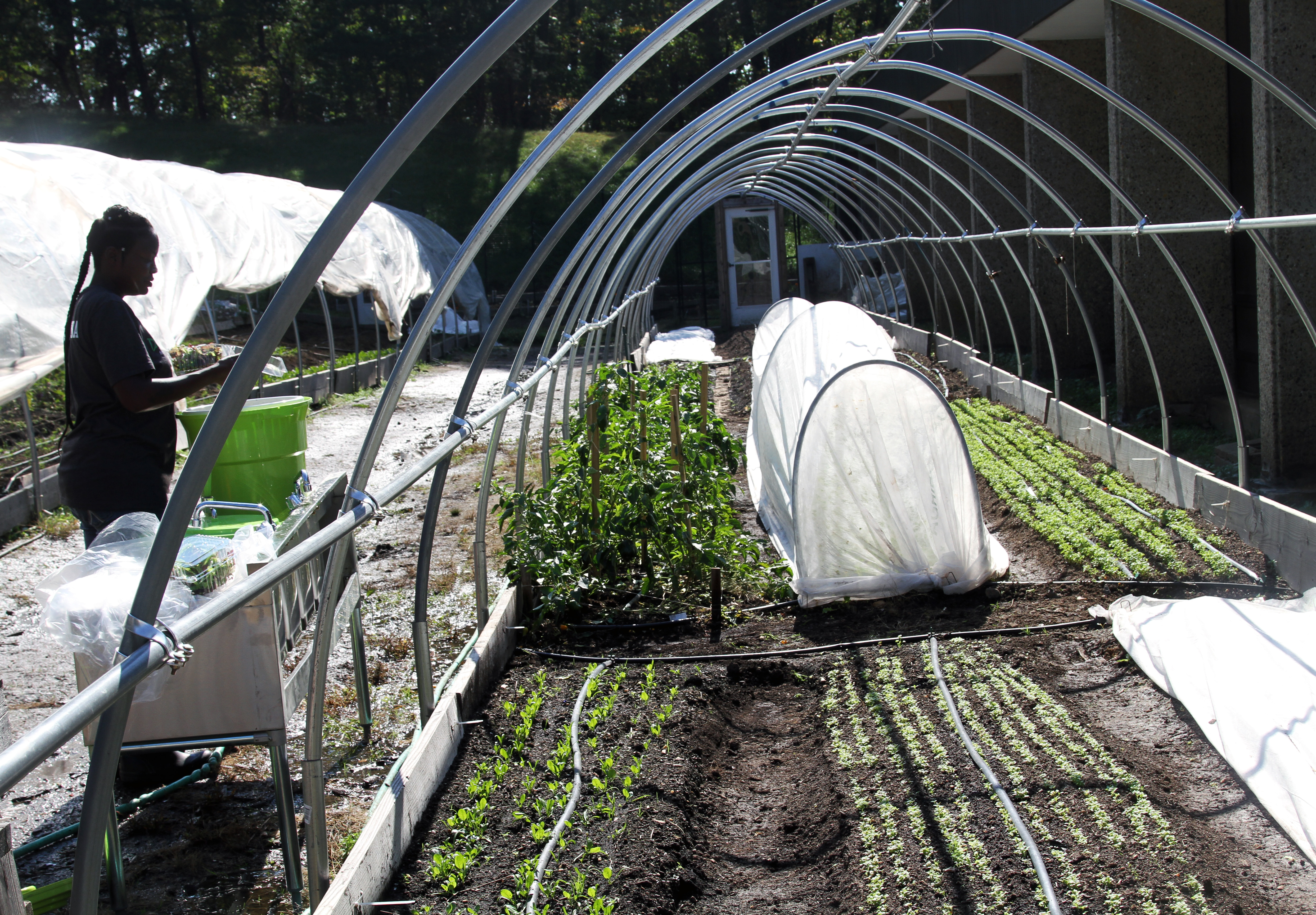 The hooped gardens are shielded in plastic to extend the growing season. Photo by Larisa Epatko/PBS NewsHour

DC UrbanGreens tries to extend its growing season by building hoops with plastic sheeting around the garden beds. That raises the temperature inside by about 10 degrees and allows greens such as spinach to grow further into fall.

At the farm market, Parker said she’d like to start providing samples of cooked vegetables, so people can learn how to prepare them in a healthier way. You can try one of her recipes: