3 things to watch for when Trump visits the Middle East

President Donald Trump departs Friday for the Middle East in his first overseas trip as president. He visits Saudi Arabia, Israel and the Vatican — the bases of three major world religions — aiming to unify the region against extremism and coordinate efforts to fight the Islamic State group.

President Trump first travels to Saudi Arabia in an enhanced “new partnership” with Riyadh, as Saudi Arabia’s King Salman put it. During his visit, the president will meet with Saudi officials, as well as members of the Gulf Cooperation Council.

In addition, King Salman has invited more than 50 Arab and Muslim leaders to attend a summit on May 21, just as U.S. federal courts are weighing the president’s revised travel executive order, which would suspend the entry of people from six Muslim-majority nations to review screening measures.

Elliott Abrams, senior fellow for Middle Eastern Studies at the Council on Foreign Relations, suggests a no-win situation when President Trump speaks at the summit. “If he says nothing about Islamist extremism, then I think supporters at home will say he bit his tongue. If he says too much about it, he could conceivably offend some of those who are there,” Abrams said Monday in a conference call with reporters.

The invited countries do not include Iran, which the Trump administration maintains is a “leading state sponsor of terror” though the administration has backed off on calls to dismantle the Iran nuclear deal. Iran’s activities in Syria, Iraq and Yemen — where Saudi Arabia is involved in a costly war — will be on the agenda. Iran, for its part, has criticized Saudi Arabia for “bad behavior” but said it is not looking to increase tensions with the kingdom. 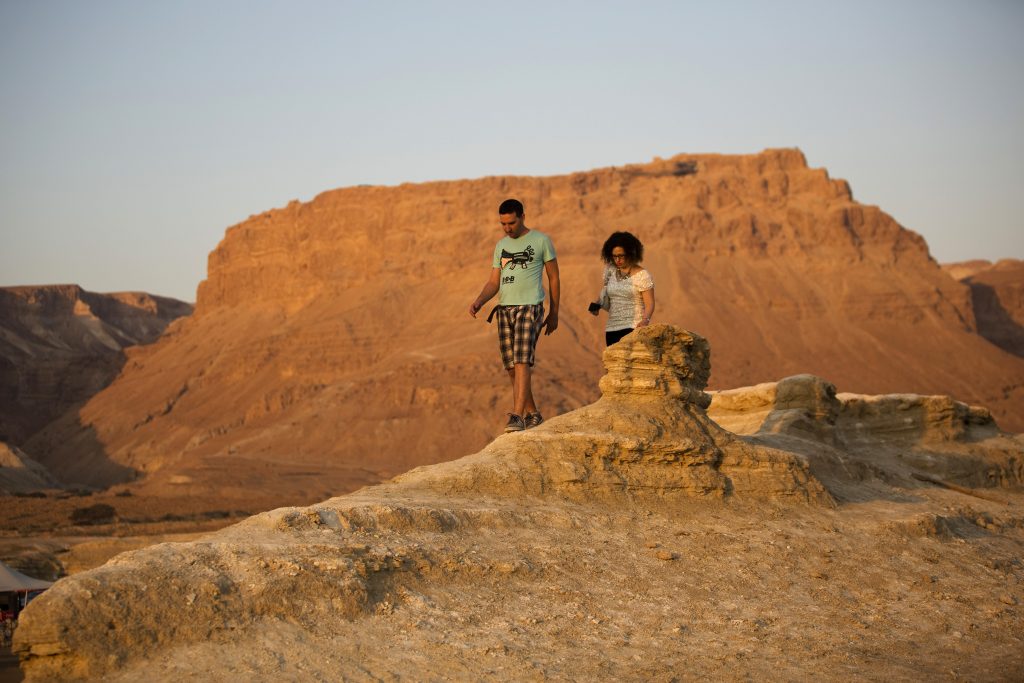 The Masada fortress is seen behind some hikers. President Donald Trump reportedly is planning to visit Masada, the site of Jewish resistance to Rome. President George W. Bush visited the historic fortress in 2008. Photo by Amir Cohen/Reuters

During previous White House visits by Israeli Prime Minister Benjamin Netanyahu and Palestinian leader Mahmoud Abbas, President Trump committed to taking on the Mideast peace process. During his upcoming trip, he plans to visit Jerusalem to meet with Israeli officials, and Bethlehem to see Abbas on May 22 and 23.

The visit marks a departure from earlier moves considered more closely aligned with Israel, including picking David Friedman — a staunch supporter of Israeli settlements — as the U.S. ambassador to Israel, and vowing to move the U.S. Embassy from Tel Aviv to Jerusalem. Many countries do not recognize Jerusalem as the capital of Israel. This trip shows President Trump is more in line with past presidents on their efforts to broker a peace deal, and Israel worries he will ask the government to do things it doesn’t want or can’t do in order to foster negotiations, said Robert Danin, senior fellow for Middle East Studies at CFR.

Moving the U.S. Embassy to Jerusalem?

Secretary of State Rex Tillerson said Sunday on NBC’s “Meet the Press” that the president is carefully considering how relocating the U.S. Embassy to Jerusalem would impact the Israeli-Palestinian peace process.

At some point, President Trump will have to address whether he still wants to move the embassy, whether it is during the trip or two weeks from now when the deadline arrives for signing a waiver to the Jerusalem Embassy Act of 1995, said Abrams. Every president since Bill Clinton has signed the six-month waiver delaying implementation of the law that would fund the embassy move.

Again, the president faces a quandary. “If he says nothing about it, then he’s moving away from the campaign promise,” Abrams said.