Why Obama Is Visiting Senegal, South Africa and Tanzania But Not Kenya 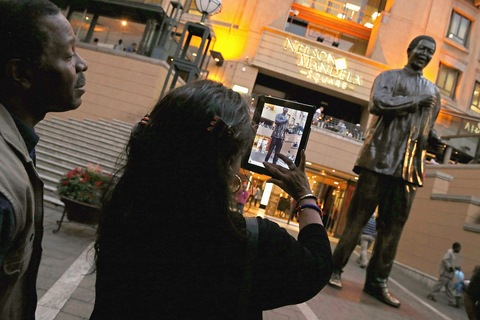 A woman uses her iPad to take a photo of a statue of former South African President Nelson Mandela in Johannesburg on April 1. President Barack Obama is planning to visit South Africa this week as part of his tour of the continent. Photo by Chip Somodevilla/Getty Images.

President Barack Obama’s last trip to Africa during his presidency — before he returns this week — was a 36-hour visit to Ghana in 2009. At the time, he told the Ghanaian Parliament, “Africa doesn’t need strongmen, it needs strong institutions.”

He plans to re-emphasize that point when he travels to Senegal, South Africa and Tanzania June 26-July 3 to celebrate those countries’ democracies and to strengthen economic ties, say White House and former officials.

And, not to mention, make up for lost time.

“This is a region that, frankly, has been underrepresented in our travel,” said the White House’s Ben Rhodes in a conference call with reporters on Friday. “This is a place where the United States needs to be present.”

One country noticeably absent on President Obama’s trip is Kenya, his father’s birthplace and home to some of his relatives. The country’s new President Uhuru Kenyatta is expected to stand trial at The Hague’s International Criminal Court later this year, which appeared to factor into the White House’s decision. Kenyatta is accused of crimes against humanity for allegedly orchestrating post-election violence in 2007-8.

“We also as a country have a commitment to accountability and justice as a baseline principle. And given the fact that Kenya is in the aftermath of their election and the new government has come into place and is going to be reviewing these issues with the ICC and the international community, it just wasn’t the best time for the president to travel to Kenya at this point,” said Rhodes.

The first country on President Obama’s tour of sub-Saharan Africa is Senegal. The nation of 13 million people is considered one of Africa’s most stable democracies.

Last year, when then-President Abdoulaye Wade chose to run for a third term, despite a constitutional term limit of two, the nation protested and elected prime minister Macky Sall in his place.

Mr. Obama plans to recognize Senegal’s ability to hold free and fair elections and to applaud the three nations’ democratic progress as a whole, said Johnnie Carson, who was assistant secretary of state for African affairs from 2009 to April 1, 2013, and is now a senior adviser at the U.S. Institute of Peace.

Senegal, which is 94 percent Muslim, is the United States’ strongest French-speaking African partner, he told reporters on Monday. It has received a Millennium Challenge Corporation grant of more than $500 million for road-building and food-security initiatives.

After Senegal, Mr. Obama and his family fly to South Africa on Friday. His main speech of the trip will be delivered at the University of Cape Town on Sunday, where he plans to focus on the themes of trade and investment, development, democracy and security partnerships, according to the White House. (Updated with link to speech)

Also in South Africa, where nearly half of the 48.6 million population is under the age of 25, the president and first lady Michelle Obama will hold meetings with young entrepreneurs. Africa’s youth are the leaders of its economic climb, and they want to acknowledge that, said Carson.

While in South Africa, Mr. Obama will contact the family of former President Nelson Mandela, and will defer to them in terms of any interaction with the anti-apartheid leader, said Rhodes. Mandela has been in the hospital for two weeks due to a reoccurring lung ailment. His condition took a turn for the worse over the weekend.

Mr. Obama also plans to visit Robben Island, where Mandela was imprisoned for 18 of the 27 years he was in jail before the end of apartheid.

The last country on the tour is Tanzania, which is one of the world’s poorest economies but is getting a boost from gold production and tourism. Mr. Obama plans to meet with African business leaders there.

China, Brazil, India and Turkey are becoming major investors in Africa. “It would not be in our interest for the United States to pull back at precisely the time when we see other nations stepping into Africa and increasing their own investments,” said Rhodes.

The president is bringing a group of American business leaders with him to demonstrate the U.S. interest in trade and investment, he added.

While some Africa advocates welcomed news of Mr. Obama’s trip, they expressed concern that he might gloss over some regional governments’ failings, such as reported instances of media and civil society repression.

Sarah Pray, senior policy analyst at the Open Society Foundations, pointed to the Tanzanian government banning a Swahili-language newspaper and tensions over the timing of Zimbabwe’s elections to ensure fairness.

Countries like South Africa can help stabilize the region, she said, and Mr. Obama should make his expectations clear. “We need to make sure the improvements in human rights and democracy, and in the advances South Africa is making, that we don’t see a backslide in those things.”