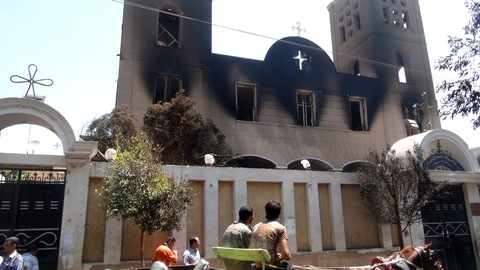 A picture taken on Aug. 14 shows the facade of the Prince Tadros Coptic church after being torched by unknown assailants in the central Egyptian city of Minya. Photo by stringer/AFP/Getty Images

While thousands of Egyptians in Cairo rejoiced over President Mohammed Morsi’s overthrow in July, others were concerned about possible reprisals against the country’s minority Coptic Christians.

It turns out they had reason to be. Among the reported incidents of intimidation, eyewitnesses in Luxor, central Egypt, told the research group the Egyptian Initiative for Personal Rights that gun- and knife-wielding crowds surrounded Christian homes, “shouting hostile, sectarian chants.” Some homes, including those in al-Dabaiya in northern Egypt, were robbed and burned, along with churches in dozens of towns.

“The Copts are an easy target,” said Mary-Jane Deeb, chief of the African and Middle Eastern Division of the Library of Congress. (Views expressed are her own.) Deeb also was born and raised in Egypt. Churches are easy to identify but not easy to protect in Egypt’s current state of “chaos,” she said. “There’s no security and ability to protect particular places or people.”

Pope Tawadros II, patriarch of the Copts in Egypt, had been critical about the treatment of minorities under Morsi. In April, he criticized Morsi for failing to protect Copts and their main cathedral in Cairo after gunmen attacked the church during a funeral.

Morsi backers viewed these declarations as support for the opposition, and when Morsi was ejected from office, they blamed Christians in part for his removal. Long-standing tensions between the Muslims and Christians, which boiled over from time to time, erupted into widespread attacks against churches and other Christian institutions more recently after Egyptian security forces stormed two encampments of Morsi supporters on Wednesday.

The Egyptian Initiative for Personal Rights, which has been documenting abuses of Coptic Christians since Morsi’s overthrow, recorded 39 attacks on Coptic churches, schools, monasteries and businesses in just the two days following the security forces’ raids on the pro-Morsi encampments.

“We’ve not seen this level of violence before,” said Dwight Bashir, deputy director for policy and research at the U.S. Commission on International Religious Freedom who specializes in human rights and religious freedoms in the Middle East and North Africa. “Clearly, the scapegoats are the Christians.”

What’s making the problem worse is the sense that people can act with impunity, whether it’s because they can escape punishment in the current turmoil or the apparent lack of interest in pursuing the perpetrators, said Bashir. But he did note the importance of documenting the acts of violence for a future governing body to mete out justice.

It’s hard for the Copts to defend themselves, because when they take up arms, they are accused of inciting violence against Muslims, said Deeb. “The Copts are very much in a Catch-22 situation,” she said.

Some have chosen to leave the country temporarily in light of the recent violence, but in general Copts, who make up about 10 percent of Egypt’s 85 million people, want to remain in their homeland.

Copts are among the first Christians in the world, and the first church was in the Egyptian city of Alexandria, Deeb explained. “They’ve always been there and they see their history going back to ancient times. Over the millennium, they’ve been attacked and survived. They see their destiny as being rooted in Egypt.”