When Mary, a 29-year-old Coptic Christian from Minya, Egypt, landed seven months ago at Dulles Airport in Northern Virginia, many thoughts were swirling in her head. How would she fare in the United States knowing so little English? Would her brother and other relatives she left behind in Egypt be OK?

Her motivation for leaving an increasingly dangerous Egypt was embodied in her two lively little boys, ages 4 and 7.

“I left my house and my family. It was hard for me, but I was thinking of my kids,” she said recently after Sunday liturgy at St. Mark Coptic Orthodox Church in Fairfax, Va. She said she was being harassed and threatened for being a Christian, identifiable by the small traditional Coptic cross tattoo on her wrist. She had seen churches and homes burned in her city, and was too worried about the violence to send her children to school.

Mary — who asked to be identified by only her first name while she works to get permanent resident status — and her husband originally went to Saudi Arabia after leaving Egypt. But coming from Minya, which has one of Egypt’s largest Coptic Christian populations, they didn’t feel at home in Saudi Arabia, where they couldn’t find any Coptic churches.

Instead, they traveled to the United States and connected with the growing Coptic community in the Washington, D.C., area. 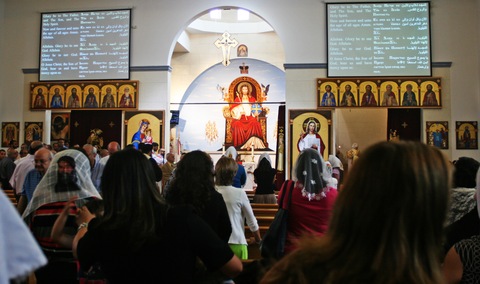 Electronic billboards in the church display readings and responses in three languages: English, Coptic — which resembles Greek — and Arabic. Photo by Larisa Epatko

‘Home away from home’

Attendance at St. Mark has never been higher. It’s added more church services to accommodate the overflow crowds, holding some events in the attached elementary school gym and initiating an Arabic-language liturgy on Saturday morning for the newcomers.

Traditional Coptic chanted hymns are performed by a choir using small hand-held cymbals and the triangle.

St. Mark was established in 1976 with about 80 families, according to its website. The concrete domed church was built in 1997 and now has more than 3,500 members.

The congregation, mainly from Egypt, grows in waves, and at the moment is at a crest, said Moheb Andrawis, a volunteer at the church. On a recent Sunday, he stood in the lobby of the church wearing a crisp gray suit and a broad smile, greeting everyone walking by him.

St. Mark began the Greeting Ministry two months ago. Andrawis said at first he was meeting about 15 new families each Sunday. The number has since dropped a bit as he’s gotten to know people.

Having such a large Coptic community is both good and bad, he said. “You can find many people to help, of course, but it is very easy to lose someone in the crowd.” The purpose of the ministry is to sign up the newcomers so that the church can reach out with its services.

Those services include helping new immigrants find and furnish apartments, get their driver’s license, and enroll their children in school. The church also provides a free medical clinic. 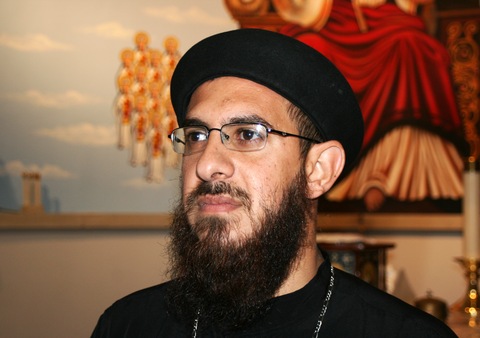 “In the last two years, we’ve had a huge influx of immigrants coming from Egypt due to the persecution of the Christians specifically being targeted by the Islamists,” said Fr. Paul Girguis, one of four priests at the church. He said about 10 to 13 families are arriving each month.

The animosity in Egypt got worse in 2011, when massive protests led to then-President Hosni Mubarak’s ouster. “There was no government and no security. The police weren’t instated at the time. If anyone had an enemy, they could punish their enemy,” said Girguis. Violence erupted in July when Mubarak’s elected successor, Mohammed Morsi, an Islamist, was forced out of office and his Muslim Brotherhood party blamed the Copts.

Dozens of churches, Christian-owned shops and homes were burned in the two days following Morsi’s removal. Some Muslims reached out to help, protecting their neighborhoods’ churches from marauding gangs, while local authorities turned a blind eye to the trouble, Girguis said. “It’s going to take a long time for Egypt to stand on its feet. It’s a very broken country.”

The Copts who could afford to leave Egypt applied for asylum in places such as Canada, Australia and countries in Europe. In the United States, Coptic Christians are concentrated in California, New Jersey, New York and Virginia. Once they arrive and get settled with jobs and put their children in schools, they tend to stay.

The initial adjustment can be difficult, said Girguis. Adults have to resort to odd jobs to make money, while they’re waiting for asylum. Children looking to “fit in” at school try smoking and drugs, and wind up getting arrested.

Coming from a more conservative culture, some Egyptians find the United States can bring new opportunities — and problems. “It’s not easy to have a girlfriend or boyfriend in Egypt, but here everything’s open,” Girguis said. “You find them getting into relationships and getting into trouble and making mistakes that they normally wouldn’t make.”

In response, the church has organized more youth ministries for different age groups. The goal: to “create a sense of unity and family so they would feel that the church is their home away from home,” he said.

Despite the violence in Egypt, Girguis said he didn’t think all Copts would flee. “The Copts are strong. We’re a resilient people.” The word Coptic is derived from the Greek word meaning “Egyptian”. And even though some have moved away, Copts hold their homeland in their hearts, he added.

‘Egypt is our country’ 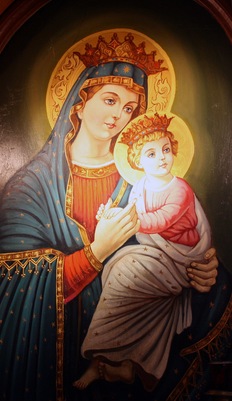 A Madonna and Jesus icon hangs in the church. Photo by Larisa Epatko

After Mass at St. Mark, children dashed around chatting adults. For those looking for a taste of home, such as molokhia leaves to make soup or some gibna rumi cheese, a market located in the halls of the church offers Egyptian products for sale.

“I know after coming here, it would be a long time before I could go back,” said Mary, sitting with her friends and their children at a table scattered with empty cookie wrappers. But she said she would like to return some day. “Egypt is our country.”

Andrawis, the volunteer greeter, has been in the United States for 18 years. He came from Cairo and still has family in Egypt. He said he worries about them all the time. “You can never tell what’s going to happen tomorrow. It’s very unpredictable.”

But here in Virginia, he said he’s working to “bring all of God’s children together,” so at least they can take comfort in each other.