Everything we know about the multiple attacks in Paris

At the sites of Friday’s attacks in Paris and at the entrances of embassies abroad, piles of flowers, flags and wine — this is France after all — continued to grow on Monday. And candles, hundreds of candles.

They were small tokens of sorrow and solidarity with the City of Light.

Personal tributes also spread online as the names of the victims emerged.

On Nov. 13, Paris experienced its worst level of violence since World War II.

Gunmen with Kalashnikovs fired through windows at the Petit Cambodge Restaurant on Rue Alibert, and several other cafes in the city, killing at least 37 people. Panicked patrons dropped to the floor and people on the streets fled.

At the Stade de France, Hollande and about 80,000 others were watching an exhibition soccer match between France and Germany. Three suicide bombs exploded around the stadium, the Associated Press reported. Hollande was whisked to safety. Some spectators thought the explosions were fireworks, and in the confusion, the game continued.

After police stormed the building, four attackers were dead: three had blown themselves up and the police shot one, the BBC reported.

“They are cutting down everyone. One by one,” said a concert-goer who managed to escape.

A total of 130 people died at sites in and around the capital: 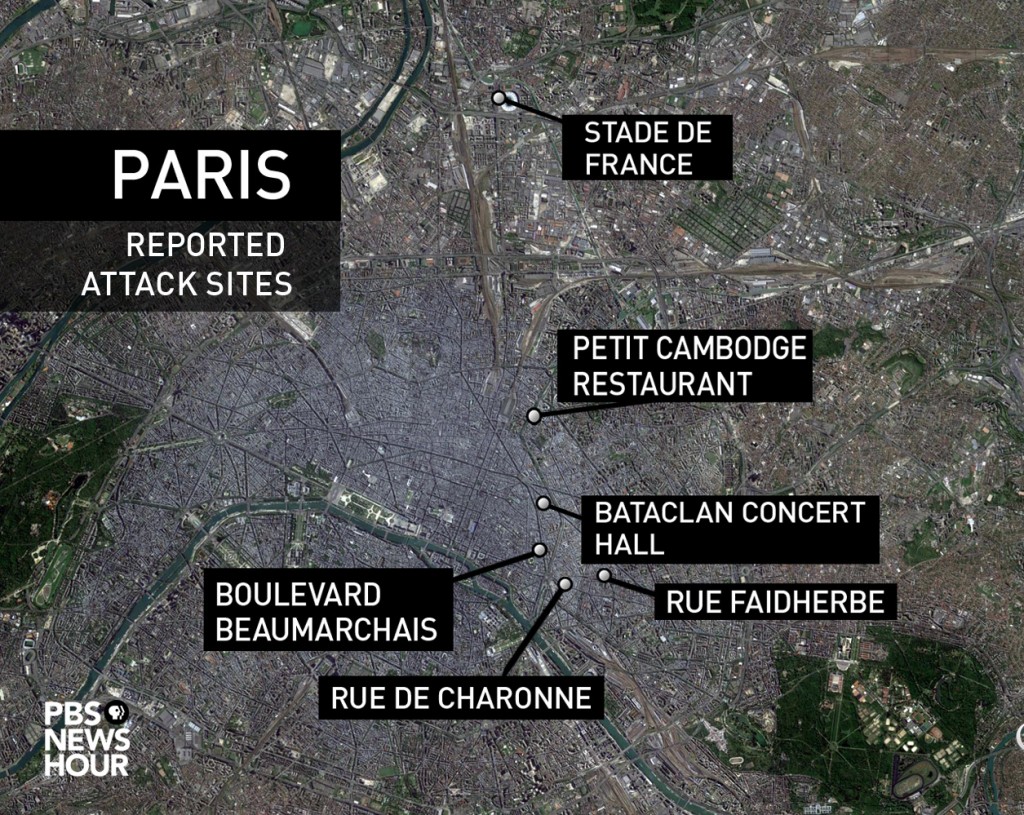 President Francois Hollande called it an “act of war” in a televised address and blamed Islamic State militants for the massacre.

The Islamic State group claimed responsibility for the attacks on Saturday morning, though its statement could not be authenticated.

Hollande declared a nationwide state of emergency, reinstituted border checks and imposed a curfew to restrict foot and vehicular traffic. He deployed about 1,500 military personnel across the city. 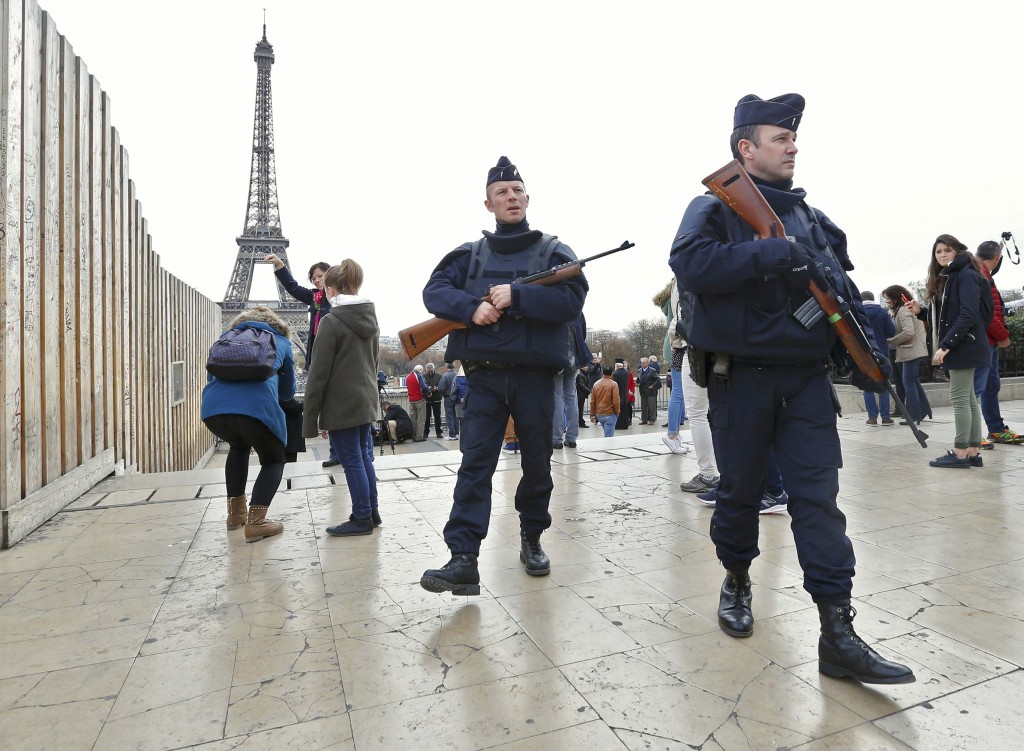 Police patrol near the Eiffel Tower the day after a series of deadly attacks in Paris on Nov. 14. Photo by Yves Herman/Reuters

Eight attackers reportedly were dead; seven killed themselves with explosive vests and one was shot by police. Some of the attackers were identified as French nationals, and French police said one carried a Syrian passport. According to Greek officials, the name on the passport matched the name of a Syrian migrant who arrived on the Greek island of Leros six weeks ago.

The hunt for accomplices began as well. Belgian authorities arrested several suspects on Saturday after tracing license plate tags seen near the Bataclan shooting rampage. French police circulated a photo of 26-year-old Salah Abdeslam, born in Brussels, suspected of taking part in the attacks. His brother was among those arrested in Belgium. 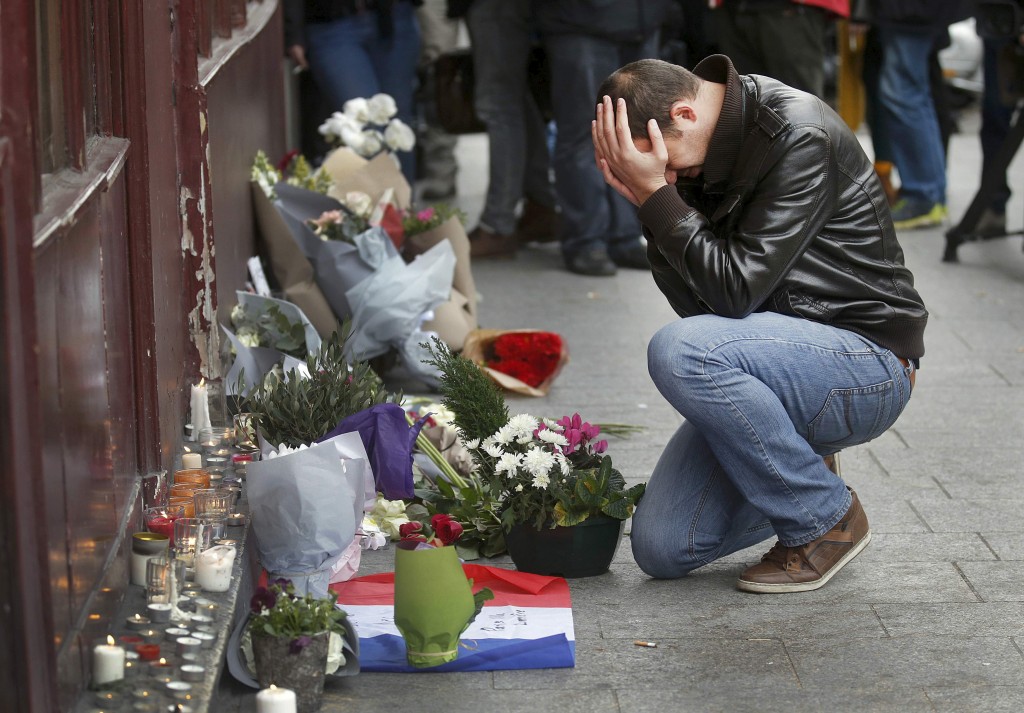 A man pays his respects on Nov. 14 outside the Le Carillon restaurant, one of the sites of a deadly assault in Paris the previous night. Photo by Christian Hartman/Reuters

The French capital was already on edge after gunmen killed 18 people in early January in attacks involving the satirical magazine Charlie Hebdo, a Jewish supermarket and a policewoman on patrol.

On Twitter, people used hashtags to express their support: #PrayforParis, #JeSuisParis and #PorteOuverte to offer the traumatized a place to stay.

British Prime Minister David Cameron said on his Twitter account, “I am shocked by events in Paris tonight. Our thoughts and prayers are with the French people. We will do whatever we can to help.”

Other world leaders expressed their condolences.

In Washington, President Barack Obama called it “an attack not just on the people of France, but this is an attack on all of humanity and the universal values that we share.”

Watch his comments below:

U.S. authorities said they were monitoring the situation and that there appeared to be no credible threat against the United States.

Kate Moody of France 24 described how events unfolded on Friday.

Lorenzo Vidino, director of the Program on Extremism at George Washington University, explained that France has a large number of individuals inspired by al-Qaida and the Islamic State group’s ideology. And the country’s aggressive foreign policy in North Africa and increased presence near Syria and Iraq against Islamic State forces make it a target.

And after the latest campaign news, NewsHour political analysts Mark Shields and Michael Gerson weighed in about the vulnerability felt after such attacks.

Left: As France observed three days of national mourning, members of the public continued to pay tribute to the victims of Friday's deadly attacks. Photo by Jeff J. Mitchell/Getty Images