A misunderstanding with a stranger on a train — and the conversation that ensued — shaped Julie Martin’s future business.

Martin, a fashion student and aspiring businesswoman, had inadvertently taken Sister Jessy Alex’s private cabin on a train ride from Paris to Amsterdam back in 2001. Alex, a nun, let her stay, and the two got to talking. “I was really struck by her presence” and her commitment to the girls in her orphanage in India, Martin said.

The train ride lasted only two hours, but it made a lasting impression on Martin. She supported the nun’s home for girls in Tamil Nadu in southeastern India in small ways, sending household items as needed. Martin also visited in person, where she learned a common practice in India and other developing nations was for families to pull their girls from school to work in the fields and start earning money. The same was happening in Alex’s home for girls.

“They wanted to stay in school, and they were such bright girls,” said Martin. “That was heartbreaking.”

She and Alex devised a plan to provide job training for the girls to create an incentive for their parents to keep them in school. Martin had a professor who specialized in natural dying of fabrics, so the idea behind Lions in Four was born. 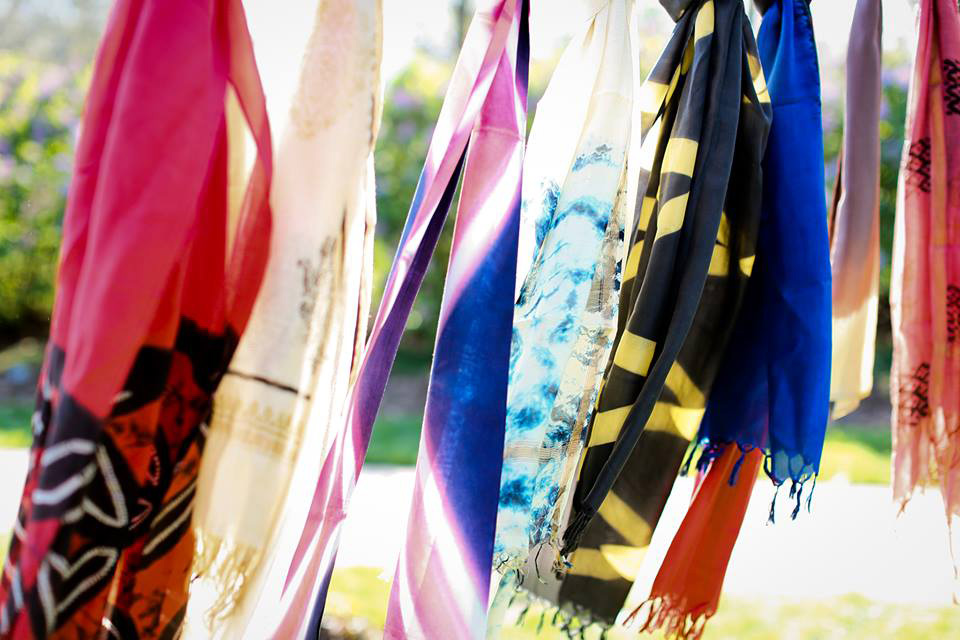 Artisans in India weave and use natural dyes to color the scarves. Photo courtesy of Lions in Four

They established a training center for the girls to learn sewing, fabric dying and beading. Lions in Four has a foundation side and a for-profit online store that started selling the scarves and handbags made by women artisans in the community of Tamil Nadu and neighboring Kerala state in 2014. They partnered with organizations in those communities that pay women a living wage to ensure the workers “not only survive but begin to thrive,” said Martin.

The artisans do everything from spinning the fibers, weaving the fabric, creating the dyes and coloring the cloth. The resulting scarf has an intricate design and luxurious drape. “It really is an art, what they do,” she said.

Martin met with another socially conscious company, New York-based Nest, which links Western retailers with ethically sourced goods. She learned that one of the hurdles to sustaining the sewing centers was supplying year-round orders in a fashion industry that is seasonal.

Lions in Four, based in Kansas City, Missouri, is therefore embarking on a membership model in which it recruits customers on its website to receive exclusive items four times a year offered at lower prices than similar items would normally cost. “Once we hit 1,000 members, we can keep the four centers busy continually throughout the year,” she said.

Like other nonprofits that have a for-profit side, the Lions in Four Foundation needs its for-profit side to be self-sustaining, said Martin. And by building a community, she is hoping their shoppers connect “on a level that’s deeper than what handbag you’re carrying today,” as her website says.