Former South African president and anti-apartheid activist Nelson Mandela turns 95 on Thursday. He spent many of his years in jail while still fighting for a democratic and free society.

In all, Mandela was imprisoned for 27 years, 18 of those on Robben Island, a rock quarry off the coast of Cape Town. He and eight other African National Congress leaders were convicted of sabotage and conspiracy to overthrow the government, and were sentenced to life in jail in 1964.

Mandela and the other prisoners were completely isolated, got little to eat and had to undertake the grueling work of pounding rocks into gravel.

What kept him and the others sane was the community they formed for themselves, according to Gay McDougall. During apartheid, McDougall was director of the Southern African Project of the Lawyers’ Committee for Civil Rights Under Law, assisting in the defense of thousands of political prisoners in South Africa.

“One of the things that was extraordinary about [Mandela] is his sense that being in a group — a collective — of people committed to the same principles, along with making collective decisions about the way forward, is an essential element in movement-building and survival in circumstances that are harsh and oppressive,” she said. 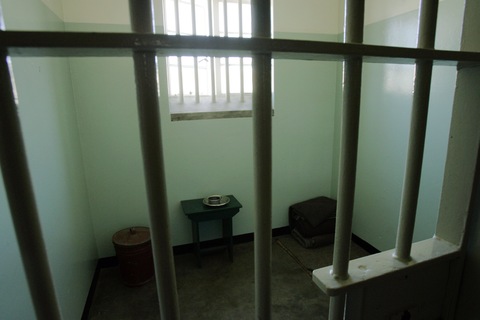 “People refer to ‘Robben Island University’ because they began to study” everything from politics to their individual areas of expertise, said McDougall.

Mandela also knew he was serving a larger purpose in jail and didn’t hold it against the guards, she said. “That lack of personal animosity toward those in charge of his confinement was important to his survival.”

Times were tough, though. It was in prison that he learned about the death of one of his children from his first wife Evelyn Mase.

His health also took a toll. In 1982, he was moved to the maximum security Pollsmoor Prison on the main land, where he was believed to have contracted tuberculosis. He has fought respiratory ailments ever since.

An international movement helped secure Mandela’s release in 1990 at age 71. When he emerged from jail, no one knew what he would look like — that’s how closely the apartheid government had shielded him from the world, said McDougall.

“I thought he looked remarkably fit and handsome, upright and dignified,” she said. And the speech he gave in Cape Town upon his release was remarkable in that he “didn’t give an inch” from his original demands going into jail, she added.

“The need to unite the people of our country is as important a task now as it always has been. No individual leader is able to take on this enormous task on his own. It is our task as leaders to place our views before our organization and to allow the democratic structures to decide,” Mandela said on Feb. 11, 1990.