Before His Death, Dawn Editor Razvi ‘Wouldn’t Leave Pakistan for the Moon’

KARACHI, Pakistan | Two days before his brutal death, Dawn editor Murtaza Razvi replied to my email asking why he and his family chose to live in Pakistan despite its many challenges: 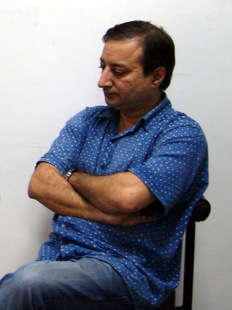 Murtaza Razvi at a meeting with American journalists in Karachi. Photo by Ann Hartman/East-West Center

“I have lived in several countries and felt at home; ditto for my wife,” he wrote. “But we’re raising our three daughters in Pakistan because if people like us left, we felt we’d be abandoning this country to the forces of darkness.

“We wouldn’t leave Pakistan for the moon, just yet. We holiday abroad to show the girls what the ‘normal’ world is like, and that we too should be like them. Of course, the girls will make their own choices when they grow up.”

Razvi earlier had met with a group of visiting U.S. journalists in the Karachi offices of Dawn to talk about the criticisms some media outlets receive for their coverage and the challenges of reporting and living in Pakistan, which led to our follow-up email exchange.

On Thursday, Razvi, the editor of the magazine section of Dawn Media Group in Karachi, was found in an office apartment building, apparently strangled to death. There was evidence of torture. Dawn reported that his family was cautioning against speculation on his death until the police could finish its investigation.

His colleagues and friends, shocked at the news, described Razvi as even-tempered and compassionate, and a responsible father. M. A. Majid, who was editor of Dawn’s leader-page called him “a talented journalist besides being a nice human being.”

Razvi’s death — though not connected at this point to his journalism — still serves as a reminder of the perils journalists face in the bustling port city of Karachi and elsewhere in Pakistan.

The Committee to Protect Journalists, which tracks journalism deaths around the world, ranked Pakistan as having the highest number in 2011 at seven. In 2010, it also topped the list at eight. Journalists’ deaths where the motivation is connected to their work have been on the rise since 1992, the group reported.

Journalists “are targets for just about every player in Pakistani society,” explained Bob Dietz, Asia program coordinator for the Committee to Protect Journalists. “The military and the intelligence services are always the first ones that pop into people’s minds outside of Pakistan, but in fact in Pakistan they’re one of the smaller players. There are political parties, especially in Karachi, who are involved in incredible turf wars and battles at neighborhood levels who take out the reporters they see as unfavorable to them.”

In the border areas near Afghanistan, he continued, militant groups, the Taliban and al-Qaida “are constantly threatening journalists and then every once in awhile one does get killed.”

In addition, “you have big shot businessmen and feudal landlords who have a sense of entitlement and don’t think twice about killing someone who denounces them in a newspaper,” he said.

“In this kind of society, where you have all these players and a relatively weak central state, it’s open season on journalists.”

Pakistan’s Minister of Information Firdous Ashiq Awan said she doesn’t agree that government officials or others are trying to dictate coverage in the media or that journalists should be targeted for a story. “We condemn that sort of action,” she said.

Although media coverage focuses too much on the negative and not enough on the positive, especially when covering the government, Awan said, an independent media “is necessary for the functioning of a democratic government.”

She said Pakistan has set up a journalist victim fund to help support families of reporters killed by terrorism with health and life insurance.

Another problem in Pakistan is that prosecutions are low — and not just for reporters, said Dietz.

Larisa Epatko participated in the Pakistan-U.S. journalists exchange program offered by the East-West Center. View more reports from the trip and follow us on Twitter.