A garbage pile in India’s capital Delhi that had reached a towering 15 stories tumbled into a nearby canal on Friday, killing two people.

When part of the Ghazipur landfill fell into the canal, it caused a large wave to wash over a nearby road, sweeping a car, two motorcycles and a scooter into the rushing water of the canal. Divers were able to rescue five people from the canal, but two others died. Police have identified them as a 30-year-old woman and 20-year-old man. 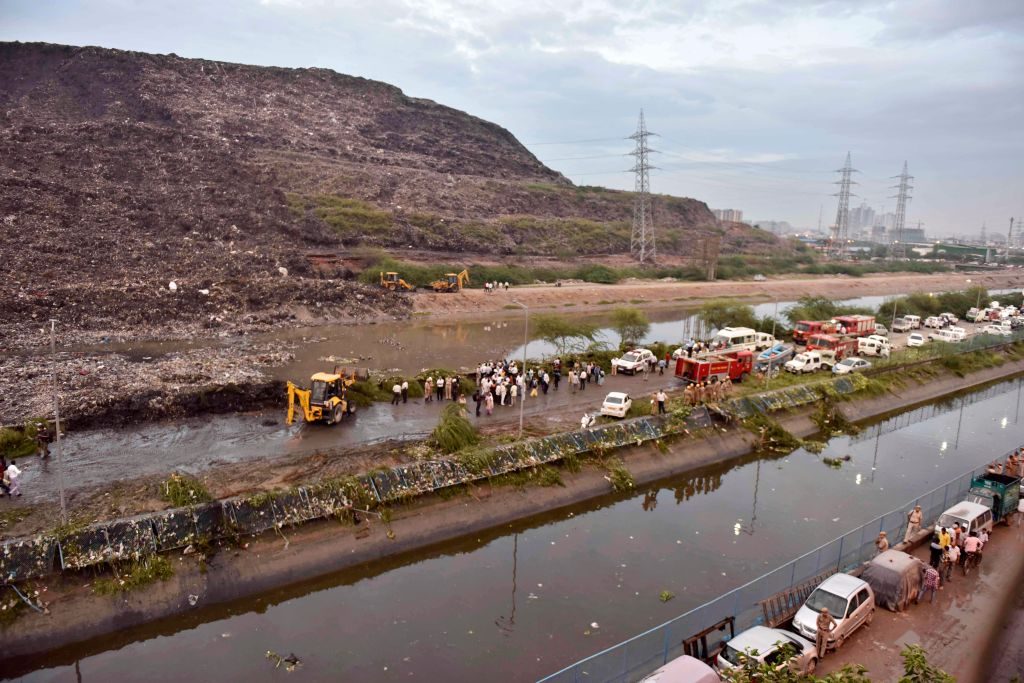 The Ghazipur landfill in Delhi was supposed to stop accepting garbage at about 65 feet, but it had reached a height of about 165 feet when part of it slid into a nearby canal. Photo by Mohd Zakir/Hindustan Times via Getty Images

Ghazipur is one of several major municipal waste sites in the city of 20 million people. Local officials said they would investigate the cause of the collapse, but some experts believe heavy monsoon rains in the region weakened the massive trash pile.

Mahesh Babu, managing director of IL & FS Environmental Infrastructure & Services Ltd., was hired by the Delhi government to manage the site. He told PBS NewsHour special correspondent Fred de Sam Lazaro earlier this year that the mountain of waste was at risk of an avalanche, especially since Delhi lies in a seismic zone.

You can watch his full report:

Note: This video may not work correctly in all browsers.

Left: Rescuers worked to save people who were swept into a canal when part of the Ghazipur landfill in Delhi, India, collapsed on Sept. 1. Photo by Vipin Kumar/Hindustan Times via Getty Images