U.S. and France stand together against ‘barbaric’ terrorist group

President Barack Obama said Tuesday with French President Francois Hollande at his side that the two countries are united in the fight against the Islamic State group. “Today we stand with you. Nous sommes tous Francais.”

“This barbaric terrorist group … and its murderous ideology pose a serious threat to all of us.  It cannot be tolerated.  It must be destroyed, and we must do it together,” Mr. Obama said.

Hollande’s visit to Washington, D.C., comes a week and a half after Islamic State recruits terrorized Paris by setting off explosives and shooting concert goers and restaurant patrons. At least 130 people died in the coordinated attacks.

Since the attacks, France scaled up its airstrikes in Syria and in Iraq, and strengthened intelligence-sharing with other countries on the targets, said Hollande. He said he is making the rounds of key allies, including Germany and Italy, to discuss how they can better combat the Islamic extremists. On Thursday, he heads to Moscow to meet with Russian President Vladimir Putin.

Hollande said he will tell Putin that Russia’s airstrikes must be against the Islamic State group, not moderate rebels, and that Russia must fully commit to a political solution in Syria that leads to President Bashar al-Assad’s departure. 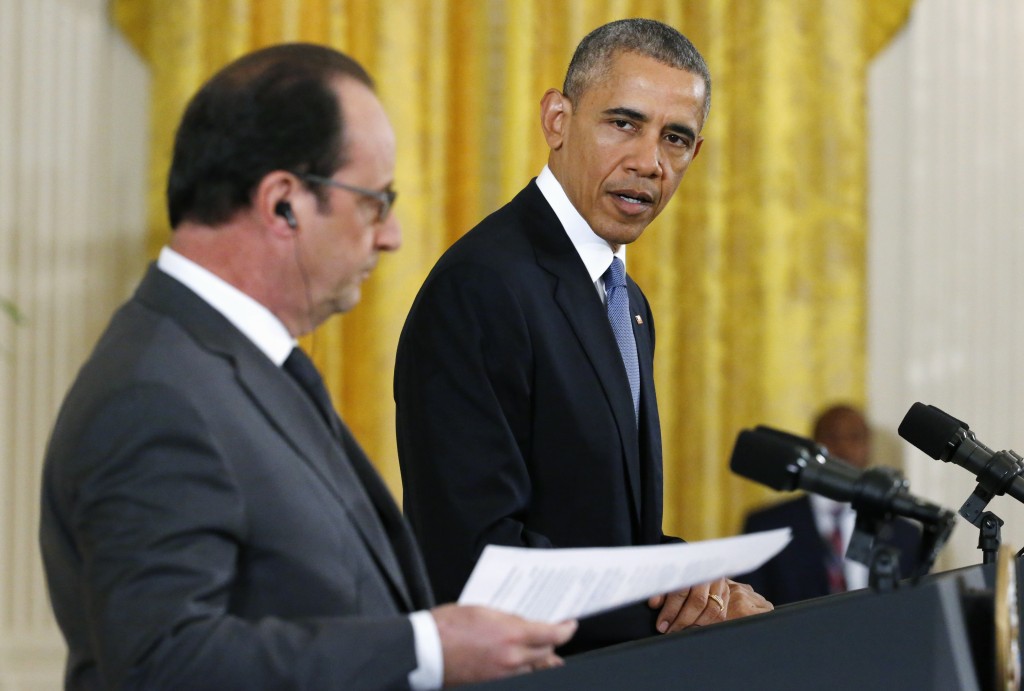 President Obama said among the 65-member coalition pushing against the Islamic State, “Russia is the outlier” for propping up Assad instead of focusing its firepower on Islamic State fighters.

By keeping Assad in power, Mr. Obama said, the destabilized country is allowing the Islamic State to take root.

He also said if Russia shifted from targeting Syria’s moderate opposition along the Turkish border, it would help prevent incidents such as the one that occurred Tuesday morning when Turkey shot down a Russian jet fighter that it said violated Turkish airspace. Russia has denied the claim.

Both Presidents Hollande and Obama said they hoped the incident would not lead to an escalation between Turkey and Russia. NATO convened a meeting on Tuesday to hear from Turkey, a member of the alliance.

The two leaders also said next week’s global climate conference in Paris sends a powerful message to the terrorists that France has the world’s support.

President Obama spoke of adhering to U.S. principles of freedom of religion and equality before the law even in the face of fear. He touched on the political debate over allowing Syrian refugees to enter the U.S., saying refugees go through up to two years of screening, including security and health.

A more effective way of preventing foreign terrorists from entering the U.S., he said, would be for the EU to bind its members to require airlines to share passenger information.

“What happened in Paris is truly horrific,” the president said. “Even as we’re vigilant, we cannot, and we will not, succumb to fear.  Nor can we allow fear to divide us — for that’s how terrorists win.”