ABYEI, Sudan | As Sudan gears up for Sunday’s national elections, another landmark vote is on the horizon — a referendum in January that will determine whether the south splits from the north.

Like the elections, the referendum is a key requirement of the 2005 Comprehensive Peace Agreement, intended to give southerners a chance to decide if they will remain in a unity government with the north, or become an independent country.

But several major related issues are still up in the air, including where the north-south border actually is.

“On the referendum, we still have a long way to go,” said Deing Arop Koul, the chief administrator of Abyei, a village located in a part of Sudan where the boundary is still undefined. “The problems start with the demarcation process. We need to know the northern borders.”

But a commission delegated with drawing the line has been stuck over which of the two parties that signed the 2005 peace deal — the National Congress Party of the north and Sudan People’s Liberation Movement of the south — will chair it, he said.

“There is a widespread agreement, including between the parties, that the borders should be as they were on Jan. 1, 1956, which is independence day for Sudan,” explained Alan Goulty, a senior scholar at the Woodrow Wilson Center in Washington, D.C. He was also Britain’s ambassador to Sudan from 1995-1999 and special representative to Sudan from 2002-2004.

“But of course, no body drew a map and dated it Jan. 1, 1956,” Goulty said. “The maps were a year, 10 years, 15 years before, or in some cases afterwards. So there is scope for argument as to where that border actually went, and when the resource questions are involved, then the parties argue.”

Even crossing the border would become more difficult if it is an international boundary as opposed to an administrative line within one country, Goulty said. 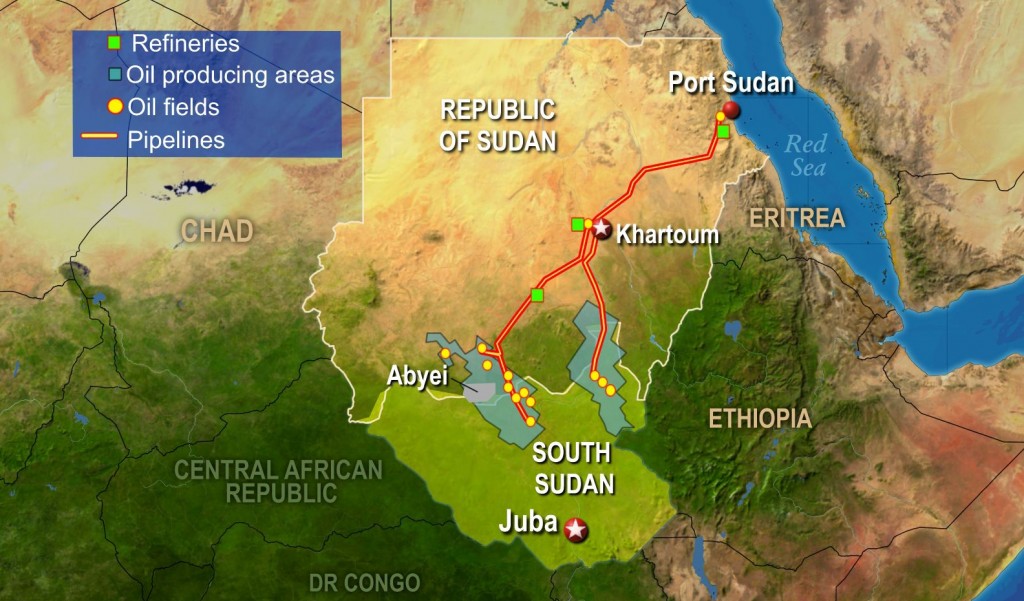 Pipelines in Sudan and South Sudan

And there are other major outstanding issues, including how to distribute Sudan’s oil revenues.

Most of Sudan’s oil is in the south, but it can only be exported through a pipeline through the north to Port Sudan. So if the south couldn’t export the oil or process it on its own, and the north couldn’t profit form the oil revenues, “both countries would be in a very dire strait,” said Goulty.

In addition, questions still surround citizenship and residence, and whether citizens of the north or south would be able to live and work in either place.

“There is a great deal of uncertainty among the populations who are currently outside of where they are originally from,” in terms of how tolerant the regimes of either the north or the south will be post-referendum, said Jill Helke, the International Organization for Migration’s chief of mission in Sudan.

“If there’s a very generous citizenship law or a generous transition period, then the likelihood of violence is much less than if there’s a very intolerant and very sort of brutal law on citizenship and other rights” that say, for example, that all southerners have to move back to the south and are not welcome in the north anymore, she said.

Sudan’s Ambassador to the U.S. Akec Khoc said the northern and southern governments have been discussing distribution of oil wealth, sharing of Nile River water, division of assets and debts, and the citizenship issue, even before the referendum takes place. “We are determined to overcome all the issues,” he said.

On the sticky matter of citizenship, it would be much simpler if all Sudanese citizens continued to have the right to live anywhere they wanted, whether Sudan was one country or two, said Goulty. “Whether that will be the outcome, I don’t know. Any alternative is fraught with additional difficulties and risks,” he said.

Left: Mangoes for sale at a market in the city of Wao in southern Sudan. Photo by Larisa Epatko