Dispatch from Algeria: Watching movies in a desert refugee camp

DAKHLA CAMP, Algeria | Two girls, Kalzum Abdlhai in a black-and-white jumper and Julita Mohamedsalej in a hot pink sparkly T-shirt, are best friends. Both 13, they are into clothes and shoes like many others in their age group. The difference is they live in a refugee camp called Dakhla in western Algeria, and those niceties are hard to come by — along with some basics as well.

The two girls were linked arm-in-arm, taking a break at a film festival to talk to a reporter.

Dakhla is the most remote of the half-dozen camps run by the Sahrawi liberation organization known as the Polisario Front. Located in the desert near the Moroccan and Mauritanian borders, the camps are completely dependent on international food aid for survival. The camps came into existence in 1976 after Spain gave up its colonial claim to Western Sahara, and the Sahrawis and Moroccans battled for control of the territory. Morocco maintains control of the area, following a U.N.-brokered ceasefire in 1991, and Algeria lets the refugees stay at the camps.

It’s an unlikely place for an international film festival, but FiSahara is in its 10th year there, amid the sand dunes and camels. Visitors stay with families in their nomad tents and boxy mud-brick homes. 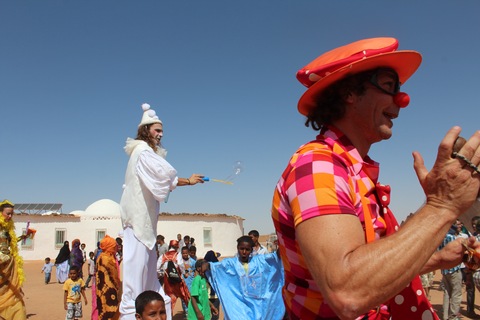 A clown troupe delights the children at the Dakhla camp. Photo by Larisa Epatko

For a week, the atmosphere is carnival-like with clown stilt-walkers blowing bubbles at screaming children and lots of singing and dancing.

Movies, mostly from Spain, are projected onto a four-story-tall wooden screen propped up on a truck. One of the movies shown Friday was timed to the second annual International Day of the Girl Child. “Girl Rising” features nine stories about girls overcoming adversities, such as child labor and Haiti’s earthquake devastation, in order to go to school.

Martha Adams, senior producer of “Girl Rising”, said the movie was being screened on the same day in 2,500 locations, including Washington, D.C.

Across the globe in the Dakhla camp, the prospects for a girl’s education are good. Girls outnumber boys in school, including universities, said the Dakhla Minister of Education Mariam Hmada. Each camp has several primary and secondary schools, and the refugees can travel to other parts of Algeria for a free higher education.

“This is like an oasis of progress in terms of literacy,” said Adams. In the refugee camps, women take many leadership roles as well. “This is a special place to visit simply because of their success.” 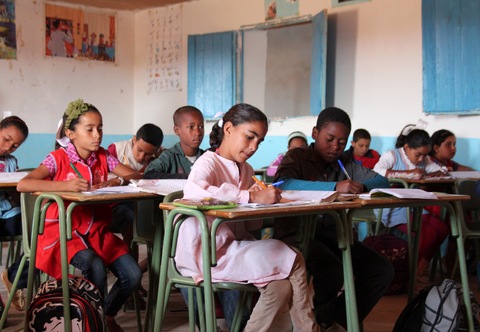 Instead of trying to change minds about the value of a girl’s education, the film’s producers were looking to learn more about the refugees’ views of education and their successful implementation despite their hardships.

Eliza Woloson, founder of the Global Education Fund and program director of Women Have Wings, said even more than an education, girls in the camps need role models to help them overcome those hardships.

When we asked the two girls, Abdlhai and Mohamedsalej, who their role models were, they considered the question for awhile.

They had heard of Aminatou Haidar, the longtime advocate of peaceful protests in Western Sahara’s quest for self-determination, who lives many miles away in the territory’s capital Laayoune. But it turned out their role models were closer to home.

Abdlhai said her brother is a teacher, and she would like to become one, too.

The reporting was supported in part by the International Women’s Media Foundation. See all of the reports in the Forgotten People series.