The 37-year-old refugee situation you know nothing about

POLISARIO CAMPS, Algeria | Rabab Deid has lived most of her life in an isolated camp in the windy, moonscape desert of western Algeria, alongside 150,000 other refugees.

The 43-year-old teacher is involved in one of the least-known, longest-running conflicts involving refugees, part of a decades-long dispute over a Colorado-sized strip of land in northern Africa called Western Sahara. On one side are the Sahrawi refugees led by a group known as the Polisario Front. On the other, the Moroccan government, which annexed Western Sahara after Spain’s colonial forces withdrew in 1976.

In the decades since, five Sahrawi refugee camps have sprouted up in western Algeria’s barren Tindouf province. With their mud-brick and concrete buildings, and nomadic tents known as khaimas, they look more like towns. Pens hold goats and camels for meat and skins. Water is pumped from the ground.

Deid vividly remembers arriving in the region at age 9, after a harrowing journey across the desert, having fled the violence between Moroccans and Sahrawis in the mid-1970s. She was separated from her mother and sisters when they encountered Moroccan forces. The others were turned back, but she managed to slip away to Algeria with her grandmother.

“I felt like I lost everything,” she said recently through a translator. “My mother was gone. My father was killed in the fighting. Later, my grandmother passed away, and I was all alone.”

But Deid carried on. She studied and became a teacher of primary school and then of secondary school. She married, had four children, and later divorced. She now lives with her three daughters and son in the newest camp, Boujdour. And even after 37 years, she still clings to the hope that she’ll one day return to her homeland.

“That was my strength — to see that future generations do not have to live like me,” she said. 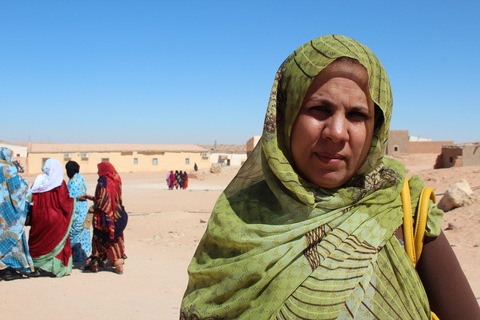 Rabab Deid is one of many Sahrawi women in the camps who took on leadership roles while men were fighting in Western Sahara in the 1970s and 1980s. Since then, the women have retained their independent way of life. Photo by Larisa Epatko

Deid tells her students about the life she remembers as a child. “We had the sea and beaches and many different places,” she tells them, adding, “‘This is not our homeland. You must do whatever it takes to go there.”

During the fighting, both Moroccan and Polisario forces committed abuses, such as torturing opponents and jailing dissenters without trials, according to Human Rights Watch. (Read HRW’s 2008 report on the Polisario camps.)

The armed conflict ended in 1991 with a U.N.-brokered ceasefire. The agreement also directed a referendum in a few months’ time, under which Sahrawis would vote either for independence or to integrate with Morocco, but 22 years later that vote has yet to take place.

As more Moroccans move into Western Sahara, the referendum has stalled over issues such as who would be allowed to vote.

Deid’s resolve to remain in the camps until Western Sahara’s “liberation” is shared by many other refugees. Even though Morocco considers Western Sahara historically part of its own country, it allows locally elected governments, for which Sahrawis can run for seats, and pours money into developing the area’s infrastructure and resources.

Until the Sahrawis in the Algerian refugee camps return to their homeland of Western Sahara, a U.N.-sponsored program flies family members back and forth for temporary visits. Deid has seen her mother twice this way since their separation, in 2001 and 2010. Being with her was overwhelming, she said.

“We felt the same way — as if they had killed a part of us,” she said.

Life in the refugee camps 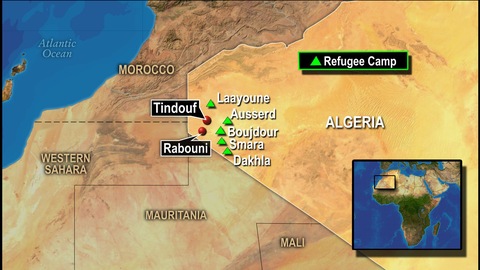 The Sahrawi refugee camps in Tindouf province, Algeria, were established in the mid-1970s.

The refugee camps, each named after a city in Western Sahara, have schools, hospitals and administrative offices. The Polisario Front runs the camps, serving as their government and security.

The temperature swings as high as 120 degrees Fahrenheit in the summer and drops to freezing during winter nights. It doesn’t rain often, but when it does — mostly in August, the rain falls in torrents for a week straight, causing homes to erode if not reinforced by concrete blocks.

The refugees are dependent on international assistance for food, which is supplied mainly by the World Food Program and distributed by the Sahrawi Red Crescent. Tons of wheat flour, rice, vegetable oil, lentils and sometimes fresh produce, such as onions, tomatoes and bananas from Ecuador, are trucked into the camps and distributed monthly to families.

About 158,000 refugees in the camps receive food assistance, said Buhobeini Yahia, president of the Sahrawi Red Crescent. Some don’t qualify, including the military, police and other workers earning a salary. Most working Sahrawi refugees don’t get salaries, but rather a small monthly stipend from the U.N. High Commissioner for Refugees to work in the hospitals and schools.

The main health problems in the camps are malnutrition and the blood disorder anemia, a lack of red blood cells likely caused by a lack of iron-rich foods. 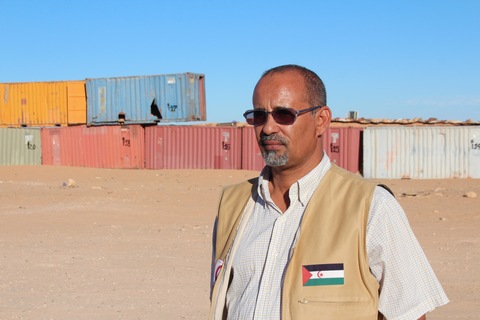 The determination of the refugees to stay in Algeria until Western Sahara becomes independent is one of the ways this cluster of camps is different than other refugee camps — and more challenging, Yahia said. Instead of looking to integrate into the host country, the refugees want to stand their ground. What’s resulted is an isolated desert community at the mercy of international aid.

The camps could use about $130 million per year in aid, but this year received less than $70 million, Yahia said.

“That makes the situation very difficult because we can’t satisfy the needs of the population here,” he said. Absent a humanitarian solution, he added, the refugees need a political one.

But a political solution has been tough to come by so far. Most Sahrawis want full implementation of the U.N. ceasefire agreement, which included the referendum for self-determination that never happened.

Polisario President Mohamed Abdelaziz — who has constitutional power to declare a return to the conflict with Morocco — said the pressure is becoming fierce and “almost unbearable.” But for 40 years, he said, the Polisario has invested in the Sahrawi people, their education and wellness, and until now they have been able to wait and understand that they need to stick together.Younger Sahrawis in particular are getting more and more impatient and are pressuring their elders to return to war with Morocco.

“But until when?” he asks. “I don’t believe it can be an eternity. Patience has its limits.” 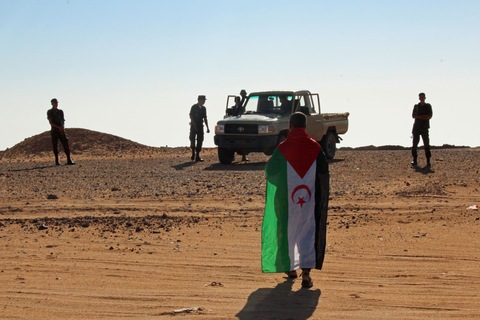 A man wrapped in a Sahrawi flag walks toward a Polisario checkpoint on the road between the camps. Photo by Larisa Epatko

Meanwhile, the Polisario is now confronted by another growing threat — extremist groups.

In North Africa, militant Islamist groups have carried out a number of attacks, including the siege of the U.S. consulate in Benghazi, Libya on Sept. 11, 2012, and the January 2013 hostage-taking at the gas plant in Tiguentourine, Algeria.

The threat hit even closer to home in October 2011, when suspected Islamist militants abducted two Spaniards and an Italian aid worker in Rabouni, the government center of the Algerian refugee camps. The aid workers were released nine months later in Mali and the suspected kidnappers are in custody.

The kidnapping took the Polisario by surprise and forced it to face a new threat: terrorism, said Brahim Mohamed Mahmud, secretary of state for security. His position was created after the incident to assist the minister of defense.

The Polisario itself is a target of extremist groups, because of its vastly different views of religion and democracy, Polisario President Mohamed Abdelaziz said from his compound in Rabouni. Most of the Sahrawi refugees are Muslim, but they can practice any faith.

Since the kidnapping, Polisario security forces are more visible when foreigners are visiting, and vehicles of armed guards accompany convoys driving between the camps.

The Polisario shares intelligence with Algeria, Mahmud said, adding: “Our dream is to become a state and have security cooperation” with other countries as well.

The region is drawing more attention these days because of the activity of extremist groups, but the Sahrawis themselves get little notice because there’s not much spillover outside of Western Sahara and it’s not an area with abundant natural resources, said Eric Goldstein, deputy director of Human Rights Watch’s Middle Eastern and North African Division.

“The implications for the United States are less important than the implications of Iran, Egypt, the Israeli-Palestinian conflict or the Persian Gulf countries,” he said.

The Sahrawi refugees are doing OK now because of international handouts, said Goldstein. “But if the international community reduced the rations, there would be panic there.” 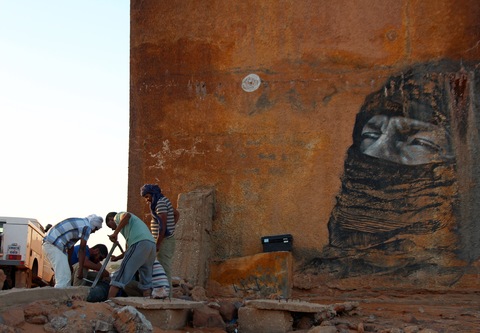 Workers tend to a water main under a mural of a Sahrawi man squinting at the sun. Some of the refugees said the painting represents their painful struggle. Photo by Larisa Epatko

Significant developments in the Sahrawi situation don’t come about that often. U.N. envoy to Western Sahara Christopher Ross, who is a former U.S. ambassador to Algeria and Syria, continues to meet with the parties separately. A decolonization committee is discussing the case in the United Nations. The U.N. Mission for the Referendum in Western Sahara, or MINURSO, has offices in Western Sahara and Tindouf, Algeria, and is helping keep the peace.

Most Polisario officials say they will continue to wait for a diplomatic solution, though they are quick to add that it would be within their right to return to an armed conflict with Morocco to try to bring independence to Western Sahara.

“We’re doing everything we can to make sure a solution is found through peaceful means,” said Abdelaziz, the Polisario president. “But if the United Nations and all the other efforts fail to find a peaceful solution to the conflict, the only other option for us is to go back to the armed struggle, which is our legitimate right. We hope it doesn’t come to that.”

In the meantime, the Sahrawis in the camps keep waiting. 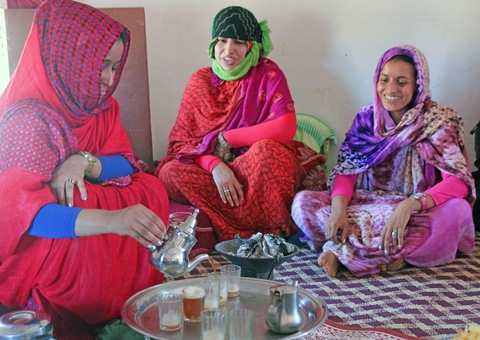 “It seems to be very difficult (to outsiders), but we get used to it,” said Bayn Abdeti, a 38-year-old mother of three. She spends her time taking care of her children and husband, who works as one of the camp’s administrators. “With time, if you do something on a daily basis for years, you get used to it.”

This report was produced on a trip arranged by the International Women’s Media Foundation. See all of the reports in the Forgotten People series.

Left: Sahrawis, a group of different tribes from the western part of the African Sahara desert, set up refugee camps in western Algeria in the mid-1970s. There, they have established schools, hospitals, even a government as they wait for a diplomatic solution to their conflict. But patience is running out among some. Photo by Larisa Epatko