Want to visit Afghanistan? They’re making an app for that

In a classroom in Herat, Afghanistan, a group of girls is working on a mobile phone application that would help tourists coming to their country.

Subscribers to the app will be able to take a quiz about Afghanistan, and based on their selections, see a list of suggested places to visit and food to try.

“It’s more about showing a good image of Afghanistan that the media, unfortunately, doesn’t show,” said Fereshteh Forough, the founder of Code to Inspire, which teaches women and girls about technology and coding.

Forough remembers when that wasn’t the case. She was born in Iran, where her family migrated in the 1980s to escape the former Soviet Union’s invasion of Afghanistan. They returned to Afghanistan in 2002, one year after the Taliban regime collapsed.

She was 15 years old and sitting in a car bumping along unpaved roads. “I asked my father, when are we going to arrive (in Herat), and he said ‘we are here!’”

Night had fallen in the dusty town, and lanterns hung outside the shops, providing the only light. Her family’s house had water from a well, and electricity for only three hours a day.

“That was my first moment in Afghanistan,” she recalled.

Under the Taliban, about 900,000 people attended school in Afghanistan and all were male, she continued.

These days, 9 million of Afghanistan’s 32 million population goes to school, about one-third of whom are female students. Forough was one — she earned her bachelor’s degree in computer science at Herat University and a master’s degree at the Technical University of Berlin in Germany. After finishing her education, she taught for three years at Herat University.

Herat has grown and advanced, she said, with almost 24 hours of electricity, running water inside homes, and paved roads.

But although the country has made strides in some services and technology — five major telecom companies are operating there — it still has problems with corruption, lack of jobs and violence against women, she said.

A male-dominated culture made it difficult for women to get ahead. And even though more women and girls were attending school, Forough found they didn’t have the same opportunities as their male counterparts to participate in social activities.

So she started Code to Inspire in 2015, where several of her students at Herat University serve as mentors to 50 female students, age 14-25. They can come after school for free to learn coding skills, mainly developing mobile apps for Android and iOS, the operating system for Apple.

Forough, who now lives in New York where her nonprofit is registered, started the school with $22,000 raised on a crowd-sourced fundraising website and with 20 laptop computers donated by Overstock.

She invited families to visit the school in Herat. “In a traditional society like Afghanistan it is very important to have the support of families and the community to have your project be successful,” she said.

Her group still experiences some backlash on social media. Commenters on Facebook say women are meant to stay at home, not code. 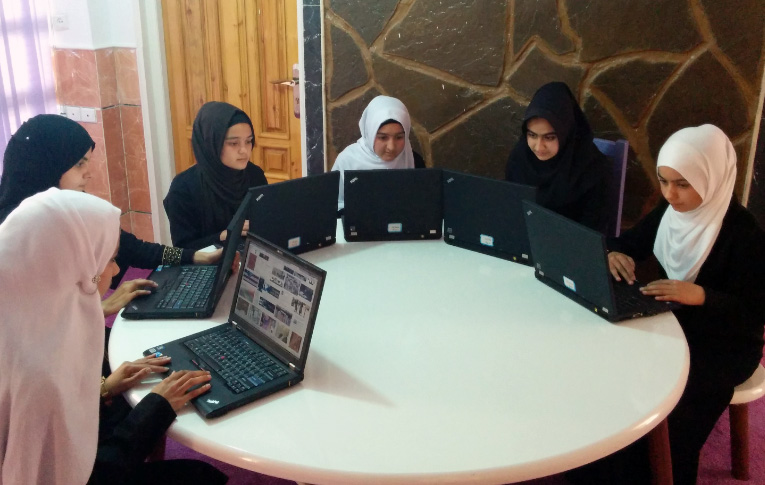 The coding classes are free and held after the regular school day. Photo courtesy of Code to Inspire

“But if we provide the same opportunity for women (as men), it doesn’t matter what field it is, it can be technology or anything. Through those skills, they can bring income to the family and be a breadwinner,” she said. Once the families recognized that, they were more inclined to be supportive, she added. She hopes with additional funding to open more schools in Kabul and Mazar-i-Sharif.

Even with their newly minted skills, her students are concerned about getting jobs in a society that doesn’t even allow them to travel alone. “The very empowering thing about technology is you don’t necessarily need to travel and be somewhere physically to do the work. You only need an Internet connection and computer to do development,” said Forough. The graduates of Code to Inspire can work from home or from the school.

Besides the tourist app, her current class of students is working on programs that test a user’s eyesight and make legal documents searchable by keyword and case number. And in the process they hope to show men and the rest of society that women are capable workers, said Forough.

“A man can download the app and see that women did that.”

On Thursday’s PBS NewsHour, watch a report on a farming project helping Afghan women become more independent. View more of our Social Entrepreneurship profiles and tweet us your suggestions for more groups to cover.

Left: The students at Code to Inspire in Afghanistan are learning how to create mobile phone applications that solve problems in their community. Photo courtesy of Code to Inspire