The meeting on Monday will come days after Special Counsel Robert Mueller’s indictment of 12 Russian officials for alleged interference in the 2016 elections through targeted hacking into computers of state elections officials as well as those associated with Democratic organizations, including the Democratic National Committee and Hillary Clinton’s campaign. Deputy Attorney General Rod Rosenstein told reporters Friday that he has not found evidence that the hacking changed the outcome of the election.

Election meddling is one of the topics Trump has pledged to address during the meeting, which will take place at Finland’s presidential palace in Helsinki. The event will be structured much like the president’s summit with North Korean leader Kim Jong Un a month ago. Trump will talk with Putin one-on-one, followed by an expanded meeting with additional advisers and staff. The two will then sit down for lunch, and Trump will return to the U.S. in the late afternoon.

But “a presidential summit is usually the capstone meeting to confirm a pre-negotiated set of deliverables,” and that’s not the case with Trump’s meeting with Putin, said Alina Polyakova, a fellow at the Brookings Institution. While it’s important to maintain dialogue between the U.S. and Russia at all levels, she said, “the Trump administration has flipped this protocol and is doing everything in reverse.”

That kind of strategy brings certain benefits but also risks, experts and officials said. Here’s what we know about the meeting between Trump and Putin and what each side has to gain, or lose.

What are Trump’s goals?

U.S. Ambassador to Russia Jon Huntsman told reporters ahead of the trip that “the president hopes that a meeting can help reduce tensions and lead to constructive engagement that improves peace and security around the world. Because you can’t solve problems if you’re not talking about them.”

At a Friday news conference in the UK, where Trump was meeting with Prime Minister Theresa May and the Queen of England, the president said he will “absolutely” bring up Russian interference in the 2016 election. “Hopefully, we’ll have a very good relationship with Russia,” he said.

“We’re entering with our eyes wide open, but peace is always worth the effort.”

Trump believes a better relationship with Russia would be good for both America and Russia, Huntsman said. “But the ball really is in Russia’s court, and the president will continue to hold Russia accountable for its malign activities. We’re entering with our eyes wide open, but peace is always worth the effort.”

The leaders may also discuss arms control, including whether to extend for another five years the New START treaty, which limits both countries’ nuclear arms, a senior administration official told reporters before the trip. Another pressing arms control issue: Washington’s accusations that Russia violated the Intermediate-range Nuclear Forces Treaty, or INF, last year by deploying an intermediate-range missile — one that can go between 500 and 5,500 km. Russia has said its missile does not go that far.

They may discuss these treaties because “both sides want to avoid accidents or miscalculations that could lead to military confrontations,” said William Taylor, who served as U.S. ambassador to Ukraine from 2006 to 2009.

What about election meddling and Crimea? 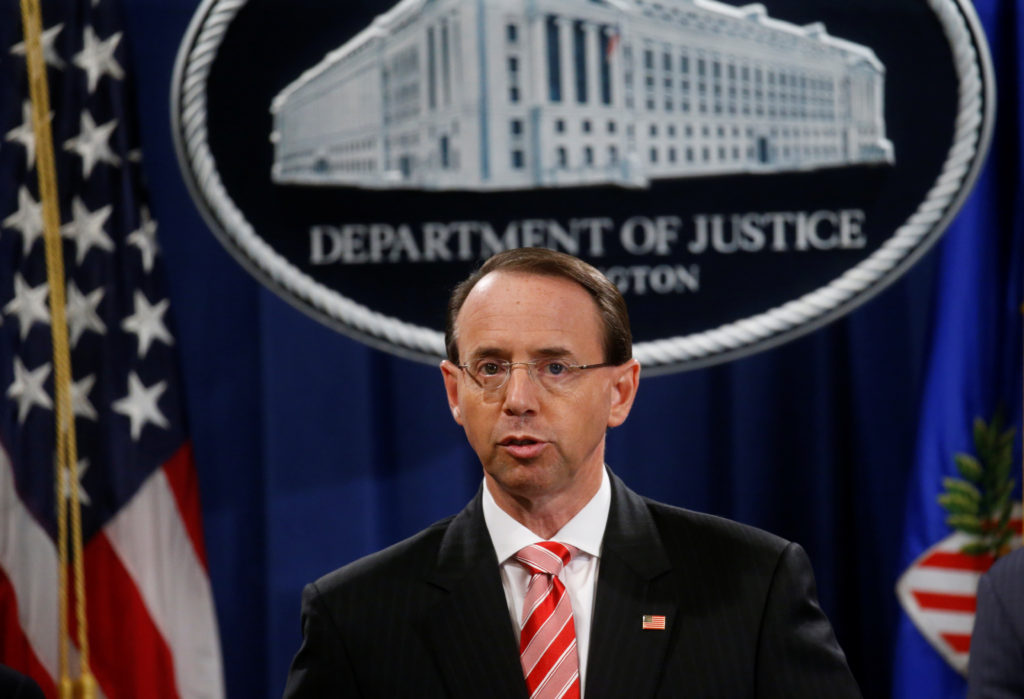 During a recent visit to Moscow, a group of U.S. senators raised the issue of election meddling. This is something other American officials have done repeatedly, a senior administration official said. But will Trump do the same?

Trump “knows the facts and the details,” and he will talk about it in his own way, the official said.

The U.S. has imposed sanctions against 19 Russians for election interference and cyberattacks — and on Friday indicted 12 Russians for allegedly hacking the computers of Democratic organizations and elections officials, and releasing those documents online.

The U.S. also expelled 60 Russian diplomats earlier this year, an action 20 other countries also took after the poisoning of an ex-spy in Britain, which they blamed Russia. The Kremlin has denied those accusations.

Meanwhile, investigations into Russian meddling in the 2016 election and possible ties to Trump’s presidential campaign continue. The House on Thursday passed an intelligence funding bill that would require agencies to brief congressional leaders if they suspect foreign election meddling. The Senate has yet to approve its version of the bill.

After the indictments on Friday, at least three Democratic senators — Chuck Schumer, Jack Reed and Mark Warner — called on Trump to cancel the meeting “until Russia takes demonstrable and transparent steps to prove that they won’t interfere in future elections,” Schumer, the Senate minority leader, said in a statement.

Polyakova said the president has brought up election interference before “and seems to believe Putin’s denials. If it comes up, it’ll likely be in passing.” The same is likely to be true for the UK nerve agent attack and Russia’s annexation of Crimea in 2014, which led to U.S. and European sanctions against Russia, she said.

“Trump will likely want to focus on what he sees as a positive agenda rather than criticisms of Russian behavior.”

“Trump will likely want to focus on what he sees as a positive agenda rather than criticisms of Russian behavior,” she said.

With such polarized stances on Crimea, it could be difficult for the two leaders to enter into negotiations on anything else, Taylor said. So Trump might choose to punt Crimea to the U.N. Security Council, “where a solution involving a U.N. peacekeeping force and an interim international administration for Donbass (a region of unrest in eastern Ukraine between pro-Russian separatists and the Ukrainian government) could be agreed.” That, in turn, could allow discussions on other matters to take place, Taylor added.

“Given President Trump’s unconventional style and past statements implying that he has raised election meddling and gotten nowhere with President Putin, he may decide not to address all of these issues,” said Jamie Fly, senior fellow at the German Marshall Fund of the United States.

Trump and Putin could also consider those subjects a done deal and no longer worth discussing, said Leon Aron, a resident scholar and director of Russian studies at the American Enterprise Institute.

On his way to the NATO summit, Trump predicted that his one-on-one with Putin would be the “easiest” part of his week-long Europe trip. Trump, who during the presidential campaign described the Russian president as a “strong leader,” said Tuesday that he “can’t say right now” if Putin is a friend or foe, instead calling him a “competitor.”

What followed was a tense two-day NATO summit, with Trump demanding fellow members pay more into the defense fund and describing Germany as “totally controlled by Russia” for buying gas there.

When the PBS NewsHour’s Ryan Chilcote asked Trump if his criticisms of NATO were enabling Putin, Trump answered that getting NATO members to pay more for defense doesn’t help Russia. “I think NATO is much stronger now than it was two days ago,” Trump said as he closed out his meetings.

He added that — rather than being displeased — the other NATO members thanked him for meeting with Putin. 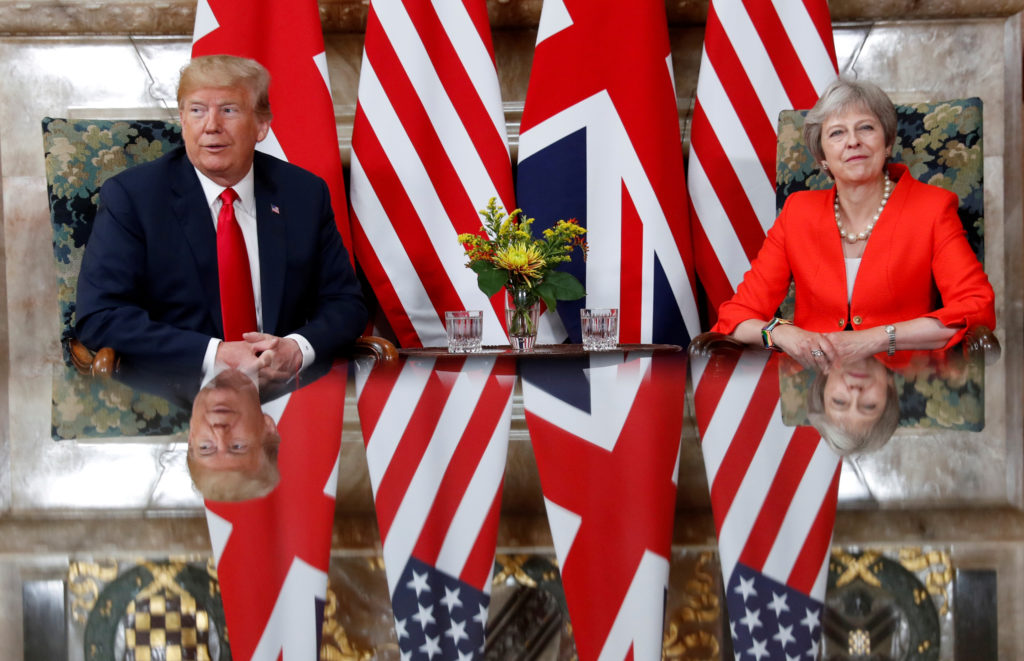 The meeting itself is not a problem, Fly said. “The United States and Russia are the world’s two largest nuclear powers and should be able to discuss global issues. The danger is in how the meeting is handled.”

Past presidents of both parties have sought cooperation with Russian leaders only to end up with little in return, Fly explained. “There is a significant danger, given the current state of U.S.-Russian relations and Russia’s ongoing interference in American democracy, that President Putin will use the meeting to his advantage.”

“There is a significant danger, given the current state of U.S.-Russian relations and Russia’s ongoing interference in American democracy, that President Putin will use the meeting to his advantage.”

An informal meeting such as this one, without a structured agenda, could result in Trump saying something that blows up later, Aron said. Trump’s off-the-cuff remarks among his European counterparts, such as on Crimea, could pack more meaning when said directly to Putin and could make Putin believe that he can manage Trump, Aron said.

Nile Gardiner, director of The Heritage Foundation’s Margaret Thatcher Center for Freedom, said this is Trump’s chance to stand up to Putin. “The Russians are not our friends, they’re not our partners – they’re our adversaries.” Trump must “project real strength and determination” in the face of America’s biggest adversary right now, Gardiner said.

William Courtney, director of RAND’s Business Leaders Forum, on the other hand, described the benefits of a more constructive approach in a column he co-wrote with Kenneth Yalowitz for RAND. Trump and Putin should consider reopening exchange programs, such as those for high school students, which helped cure Cold War-era distrust when participants from both countries got to know each other better, Courtney wrote.

“Reviving [the exchanges] could help reverse a worrying decline of independent expertise and sustained dialogue, and help lay a broader foundation for improved U.S.-Russian relations,” as they did previously in the areas of space exploration, the Arctic and medical research, Courtney said.

Will the meeting result in anything concrete?

It’s too early to say. Trump might simply want to demonstrate that he succeeded where his predecessors failed, Aron said. “My sense is that Trump wanted to show that while the Obama administration failed in establishing some sort of rapport with Putin with the ‘reset’ gone, he would establish this kind of rapport, despite the sanctions and deep divisions.”

Even without any kind of written agreement, the senior administration official said the meeting could improve the atmosphere for future dealings. “I think the fact that we’re having a summit at this level, at this time in history is a deliverable in itself.”