How to watch the Jan. 6 hearings

Since early June, lawmakers have been laying out findings from their nearly yearlong investigation into the 2021 attack on the U.S. Capitol.

The House Select Committee to Investigate the January 6th Attack on the U.S. Capitol has no acronym. (Understandably, “HSCIJ6A” was never attempted.) Instead, it is commonly known as the “January 6th Committee.”

Working largely behind closed doors, the group has pursued interviews and documents, while proving divisive with some conservatives, who accuse it of playing politics with the attack.

The vast majority of its work has not been revealed – until now. Here’s a rough guide on what we know, what we expect from these hearings and how to watch.

How to watch the Jan. 6 hearings 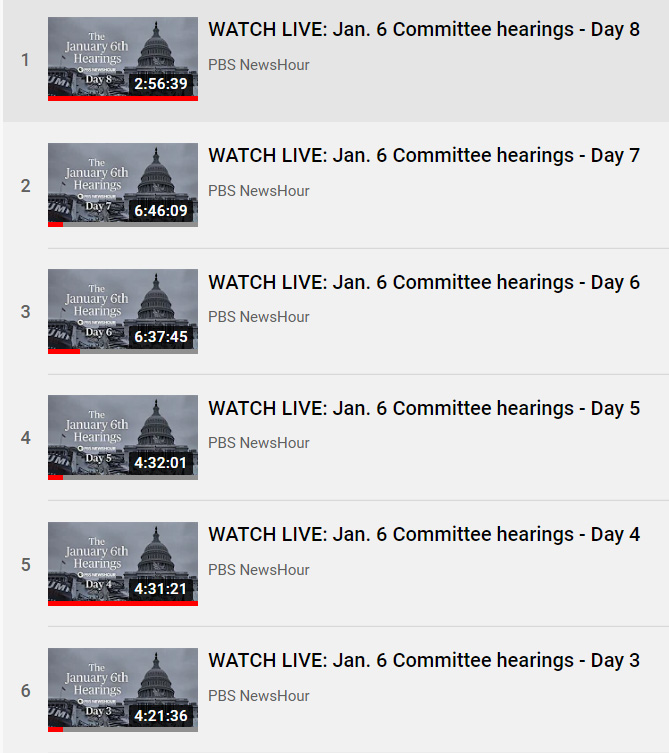 The June 9 hearing was the first of several planned public hearings that will continue into July. The committee has confirmed the times and dates for the following hearings. You can watch all the hearings in this playlist.

For major takeaways, here’s what we learned from the first, second, third, fourth, fifth, sixth, seventh and eighth hearings.

The PBS NewsHour will carry the hearings live with reporting and analysis. Check your local listings to find the PBS station near you, or watch online here or in the player below.

What are the basics about the committee again?

Let’s start with an easy one. The committee includes nine members:

The committee has been regularly releasing more details a day before each hearing.

Here’s a shortlist of who has testified before the Jan. 6 committee so far:

Donald Trump’s former campaign manger Bill Stepien was also expected to appear at the June 13 hearing. However, shortly before the hearing, he cited a family emergency that kept him from testifying, the panel said.

READ MORE: Your guide to key players at the Jan. 6 hearings

Where did this come from?

The committee was created by the House itself in House Resolution, or H. Res. 503, which passed 222-190 last June. (Nerd note: an “H. Res.” is usually a nonbinding resolution of the House. But it is also how the House forms and regulates committees, per its own rules. It does not need any Senate approval.)

Why are there so few Republicans?

The resolution gives House Speaker Pelosi the sole power to appoint 13 members to the committee, with five members appointed after consultation with Republican Leader Kevin McCarthy. But Pelosi found two of McCarthy’s suggestions – Reps. Jim Jordan, R-Ohio, and Jim Banks, R-Ind. — unacceptable, citing concerns that their appointments would seriously impact the investigation into the events of Jan. 6. Republicans were irate, pointing out that Jordan is the leading Republican on the House Judiciary Committee and Banks heads the large Republican Study Committee.

This fomented more bitter division. But it also led to a committee of like-minded investigators. Two House Republicans, Cheney and Kinzinger, told Pelosi they were interested in serving on the committee. They were also the two who publicly felt that former President Donald Trump may have played a role in Jan. 6.

What is the committee trying to do with these hearings?

These will not be typical congressional hearings. In most hearings, expert witnesses are asked questions by both parties, and lawmakers are trying to craft legislation. In this case, all of the committee members share the same point of view: The Jan. 6 attack was an insurrection and was likely fueled by political rhetoric and officials, including Trump.

Committee aides said members will reveal new details that show Jan. 6 was “the result of a coordinated, multistep effort to overturn the results of the 2020 election and stop the transfer of power from Donald Trump to Joe Biden. And indeed, former President Donald Trump was at the center of that effort.”

What will we see in the hearings themselves?

Again, this will not be typical. The committee can essentially script much of what happens in the hearings. Members are coordinating with one another on what they will say and what they will ask. Perhaps the biggest difference for viewers will be the style of the hearings. We expect something tailor made for a broad television audience. That means extensive video clips from Jan. 6, and from some of the more powerful interviews witnesses gave to the committee behind closed doors.

The chair and vice chair will deliver opening statements, committee aides said, adding that Thursday’s hearing will include a “small, but meaningful portion” from the roughly 1,000 interviews conducted throughout the probe. It’s expected to include snippets from Trump administration and campaign officials, as well as Trump family members.

What does the committee want to achieve?

Two things. First, to convey the gravity of the Jan. 6 attack. The committee, in particular, will raise questions about the level of involvement by some Republican lawmakers, including Trump.

The second goal of these hearings is to lay the possible groundwork for criminal cases. All criminal decisions will be up to the Department of Justice, but the committee aims to build up the evidence for further charges in some cases.

What about other Republicans? What will they be doing during the hearings?

Currently, Republicans who object to these hearings do not have plans for any formal hearings of their own, nor any events while the committee is meeting. Their strategy, however, is to take to the airwaves, especially in conservative-leaning media, and make their case that these hearings are entirely political.

More on Jan. 6 from our coverage:

What to expect with upcoming Jan. 6 hearings and legislative actions